Yes, there is a Santa 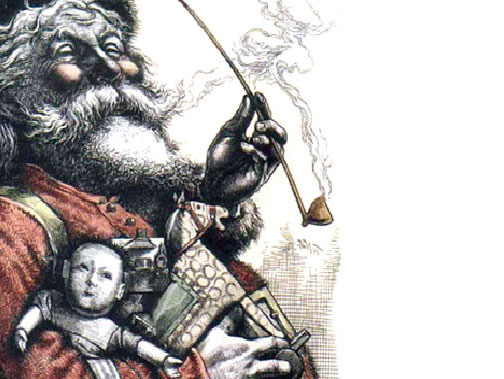 And here’s how he arrived to the Valley

The American version of the Santa Claus figure received its inspiration and name from the Dutch legend of Sinter Klaas, brought by settlers to New York in the 17th century.

The American Press, as early as called him “St. A. Claus,” but it was the popular author Washington Irving who gave Americans the initial comprehensive information about the Dutch version of Saint Nicholas. Under the pseudonym Diedrich Knickerbocker, in 1809 Irving’s “History of New York” was published.  Irving described the arrival of the saint on horseback each Eve of Saint Nicholas much like the SinterKlaas Parade in Rhinebeck each year. (See event details)

This Dutch-American version of this immortal person attained his wholly and not “holy” Americanized form in 1823 with the poem “A Visit From Saint Nicholas”— customarily known as “The Night Before Christmas” by writer Clement Clarke Moore.

Could that be the official time when Santa arrived in the Hudson Valley? Moore was a resident of the Valley residing not far from Rhinebeck.

However, in pursuit of Santa’s historical roots one must delve deep into the past to retrieve a blend of many different legends and mythical creatures; both religious and just “goody-goody”.

Over the centuries, customs from different parts of the world and Northern Hemisphere came together and created a “Global” Santa Claus, lessening the religious aspects of some cultures and homogenizing him into an ageless, timeless, immortal being with a white-beard, a jolly laugh and the omnipotent generosity of gift-giving.

But, more significantly, is that Santa Claus, Kris-Kringle, Saint Nick, Sinter Klaas, Papai Noel, Babbo Natale, Father Christmas, Belsnickle and myriad of nom de plumes have produced a person and tradition that has unified all peoples by raising the spirits of all ages, races, creeds, and beliefs.