On the west shore of the lower gateway to the Mid-Hudson Valley stands the majestic Storm King Mountain, aptly named by a 19th-century writer who noticed that a low mist on its upper slopes often foretold rain. It’s an imposing sight that has inspired many a Hudson River School artist. And in its shadow in the peaceful hamlet of Mountainville, you’ll find one of the world’s most inspiring art museums—the Storm King Art Center—amazing and delighting visitors for over fifty years.

In a sense, the world famous Storm King is yet another Hudson Valley family business. Current president John P. Stern is the grandson of H. Peter Stern, the engineer and philanthropist who co-founded the center and poured the proceeds from his Star Expansion Company into local philanthropy—and, in 1960, decided that starting an art museum would be a good time.

“My grandfather bought the land and the museum building when he was 65,” says Stern, “and there was an early focus on Hudson River School painting. He wanted to do something different that most weren’t doing.” A trip to Bolton Landing in the Adirondacks brought H. Peter to the home of sculptor David Smith, and something clicked: “Grandfather was struck by seeing a number of sculptures that had been made for the outdoors, sited on a hill against beautiful long views,” says Stern. “David Smith had worked in a Studebaker factory and learned welding there, and he used a lot of found objects and agricultural tools. That appealed to the engineer in my grandfather. When Smith died in 1965, he bought thirteen of the works and had them moved to Storm King.”

That was an early step on the road to creating a place that stuns even people who don’t think they have much use for art. The Center’s five hundred acres reveal one stunning vista after another, incorporating site-specific installations created by world-renowned sculptors and sending the soul soaring. “The key is the relationship between the landscape and the sculpture. The works are very carefully sited to enhance long vistas of the Hudson Highlands that stretch far beyond the property’s borders,” says Stern. “Before his death, my grandfather commissioned the first two site-specific pieces by Robert Grosvenor and David von Schlegell. After his death, our curator worked with both my father and the board to commission landscape architect William A. Rutherford, who worked on the site for forty-five years.”

Another piece of the puzzle fell into place when the Open Space Institute helped to conserve 2,300 acres on Schunnemunk Mountain to the west, which ultimately became Schunnemunk Mountain State Park, preserving more of the glorious backdrop for works that, as Stern says, “became iconic for the artist and for Storm King,” like the 2,358 foot-long stone wall crafted by British artist Andy Goldsworthy. “He designed the line of it and brought in a team of British ‘wallers,’ and it’s amazing,” says Stern. “It’s inspired by the history of the area and the agriculture; this long wall embraces the trees, serpentining down the hill and into the pond.” 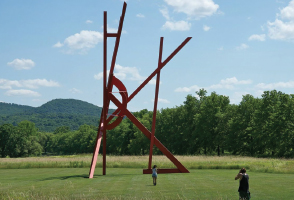 The Center commissions world-class artists and works with them for years at a time. “We allow plenty of time and space and freedom to work out what they want to do, which often results in something groundbreaking for the artist and great for the site,” says Stern. “It’s an eclectic and often surprising process. For example, Maya Lin chose the last open gravel pit from the construction of the New York State Thruway, which is our western border. The DEC championed her work as a model example of reclamation. One of their people followed it very closely and wrote about the process in their official newsletter.”

Besides land preservation and gravel-pit reuse, Storm King Art Center is constantly striving to become more sustainable on all fronts—from its solar electric tram that carries visitors on a tour to its trash cans made from 99% recycled materials to its planting of native grasses. Art and environment are constantly intersecting in new ways: Peter Coffin’s 2012 work Untitled (Bees Making Honey) inspired a permanent on-site apiary and a Saturday series of beekeeping lectures.

New ways of sharing these wonders with the public are also in a perpetual state of creation. “We’ve been doing more and more with local schools, including partnering with Horizons on Hudson in Newburgh,” says Stern. “And thanks to very generous donations, we’re now available free of charge to all Orange County schools. Last year, we had our first outdoor film screening; this summer we’ll have a whole weekend of film. We host ‘Wanderings and Wonderings,’ in which artists and poets lead tours to spots they have fallen in love with. We have yoga on Saturdays, a lot of wonderful family and children’s programming on Sunday afternoons, and classical and indie music concerts.”

Then there are the moonlit walks. “Those were started because of the Bucky ball,” Stern explains. “It’s this work by Spencer Finch, a ball that evokes Buckminster Fuller and is made with solar panels. It looks like a lunar landing module, and it glows all night. We said, we’ve got to open up at night so people can experience this.”

This summer, visitors can experience Three Legged Buddha, one of fifteen works by contemporary Chinese artist Zhang Huan that comprise Zhang Huan: Evoking Tradition, along with Outlooks by Virginia Overton, which is constructed of four-inch copper tubing. “It changes minute by minute as the light changes, and hay grows up around it. It’s a very interactive piece,” says Stern. “When the sun hits, you can see it from everywhere, yet it’s very subtle and graceful.”

Sharing the experience with as many as possible is a big part of the mission. “Last year, we had over 100,000 visitors for the first time,” says Stern. “We were up by 34%, and the goal is to keep improving on that. We started staying open till 8pm on Saturdays, and now we’ve added Sundays. The early evening light adds something special, and the air is often cooler.” So plan a visit, pack yourself a picnic, and be prepared to be blown away by this intersection of nature and art... one more big reason to love the Hudson Valley!