Brewer Justin Forsythe gets hops ready for the boil at Brewery Ommegang in Cooperstown, NY

It was many, many, many beers ago that the Hudson Valley was one of the centers of the brewing world. According to beer blogger Craig Gravina, by the 1660’s there were eight breweries in the Capital Region of the Hudson Valley, most founded by early Dutch settlers. Wheat and hops were grown in the region in abundance. And, of course, one of the most famous and prosperous brewers in the valley for many decades was Matthew Vassar, who went on to use his boozy gains to found Vassar College. But time, and especially prohibition, killed off much of the industry. Consolidation in the mid-1900’s finished off the remaining breweries. Hops eventually migrated to Cooperstown and then to the far west. Those were dry times in the Hudson Valley beer scene.

Today, brewing has made a huge comeback in the valley!

First off, many different kinds of brewing establishments exist. Some are breweries that sell packaged beers (bottles, growlers, and cans that can be found in grocery stores and beer stores, which are more and more prevalent these days). Others are breweries where you can only drink or buy the beer on premises. And, third, some are brewpubs, where they brew beers you can only buy in their bar or restaurant.

Bacchus, New Paltz
Bacchus’ beer brewing actually began a few years ago when two of their employees began brewing beer on the front porch of their apartment. One of the bottles made it into the hands of Bacchus owners, and the deal was sealed. Earlier this year, Bacchus began housing their three-barrel brewing system. Whether they are overloading their Double IPA with layer after layer of hops or letting barrels build up the funk of their farmhouse ale, they will offer a creative and carefully crafted variety of continuously evolving beers. And don’t miss out on their bottled beer selection either—500 beer types!

Back in 1993, Garry and Kelly Brown had a vision to turn a 150 year-old warehouse on a then-blighted River Street in Troy into a fully operational craft brewery. Brown’s Brewing Company became an instant success. Their River Street taproom is a mainstay of the city of Troy. They’ve earned a number of awards over the years, including TAP New York’s 2008 Matthew Vassar Cup for the Best Brewery in Hudson Valley, as well as a gold medal for their pale ale by the CIA. They also won the prestigious World Beer Cup Gold and Silver Awards for their oatmeal stout and whiskey porter, respectively, and Metroland readers have voted them Best Brewpub in 2008 and 2009.

Scott Vaccaro was a student at Villanova when he decided he wanted to become a brewer. His parents objected when he suggested he quit college and open up a brewery. Lucky for us, Scott was as hardheaded about opening the brewery as he is about quality and innovation. Captain Lawrence Brewing is one of the best in the valley. The top four executives at Captain Lawrence are all named Vaccaro—get it? Good! But what matters is the beer. From classic bottled beers to extravagant, they make cutting edge brews that wine experts collect.

Jake Cunningham and Tom Crowell have been making Chatham Brew since 2007. Like most craft brewers, they started out brewing to sooth their own palate and enjoy the camaraderie of brewing quality beer. Their beers are all natural—they never use additives of fillers, just hops, barley, malt, yeast, and that magic elixir Chatham water. Chatham Brewing won the 2012 Matthew Vassar Brewers’ Cup for the Best Craft Beer Brewery in the Hudson Valley at TAP New York, and demand grew. Now their select beers are available in large 22-ounce bottles, so they are available in stores in the region. And a new space is affording them a new, airy tasting room and more to come!

The Evans family was in the commercial brewing business for three generations. The original brewery was built in Hudson, NY in 1786. Production levels peaked in 1915 when 65,000 barrels of beer were produced and continued production until prohibition in 1920. Neil Evans revives this rich heritage at the Albany Pump Station. Surviving C.H. Evans Brewing Company memorabilia is displayed in the new facility, as well as pictures of the pump station as it appeared at the turn of the century. Today, C.H. Evans at the Albany Pump Station is one of the largest brewpubs in the Hudson Valley and one of the largest in all of New England. Food is good, and the beer is very, very solid!

Ken Landin and Janine Bennett purchased the Brooks Opera House, built in 1893, in October of 2009.  A year later, Crossroads Brewing Company opened with a seven-barrel brewhouse and a small tasting room. Award-winning head brewer Hutch Kugeman brews great quality craft ales and executive chef Paul Parillo has created a delicious menu, which is sourced from local farms and pairs beautifully with the different beers. Crossroads received the prestigious Matthew Vassar Cup for Best Brewery in the Hudson Valley at the 2011 TAP NY festival, as well as the inaugural John Cahlen award for best IPA or Pale Ale in New York State.

New to the brewpub scene, Dutch Ale House has a three-barrel system where they produce delicious small batch ales. They opened the brewery in April of 2013 and their first beer was a KPA—Karyn's Pale Ale. Like naming boats, owner Johnny Pavitch named his first brew after his woman—wife and co-owner Karyn Patvith. Also known as a “gastropub,” the food is made with love and fresh, local ingredients by culinary trained chef. Once you arrive, you’ll want to stay awhile at their antique bar. Check out their website for their beer tasting dinners in collaboration with local brewers.

The Gilded Otter is located in downtown New Paltz. Not sure what to talk about first here. The eye-catching, shiny cooper brewing equipment? This is a must stop visit when anywhere near New Paltz.

Hyde Park Brewing incorporates techniques passed down from 19th century German brewing styles. The well-traveled and award-winning John Eccles is the brewmaster. Each beer has its own unique flavor profile and characteristics—as well as wacky names. But don’t let their sense of humor fool ya! They are serious about beer. And the food is excellent too! Hyde Park is one of the biggest beer destinations in the lower Hudson Valley.

Keegan Ales was founded in early 2003 when Tommy Keegan learned about an empty building (constructed in the 1800’s) in Kingston that nobody would buy because there was a defunct brewery stuck in it! After months of cleaning and rebuilding, Keegan Ales brewed its first batch of beers on August 1, 2003. Early in 2010, The New York Times declared Mother’s Milk one of the top ten stouts in North America.

Newburgh is a tough-minded town that’s still as hardscrabble as it was when General George Washington stationed his army here more than 200 years ago. That earnest, pull-yourself-up-by-your-bootstraps appeal was exhibited when the three partners formed Newburgh Brewing Company. Christopher Basso is Brewmaster and CEO who put in six years working alongside Oliver Barrett at Brooklyn Brewery before starting Newburgh.  Paul Halayko, President and COO is “The Numbers Guy.” And Charlie Benedetti, head of sales and a 30-year veteran of Wall Street, is the brewery’s official Beer Ambassador. Music, food, and great beer in a recently restored old factory on the Hudson River. What are you waiting for?

The Country Inn, Krumville
Just when you think you are in the heart of rural Ulster County, The Country Inn appears as a beacon of light ... and beer! 500 different bottles from around the world are offered here and have been for the last 30 years. Make sure you arrive hungry, because you will not want to miss their fine food. Propietor Peter Rinaudo is dedicated to maintaining the traditions that have evolved in this unique establishment, and he succeeds in continuing the legacy of fabulous food mixed with amazing beer and drink.

The Gander Inn, Kerhonkson
The Gander Inn features over 325 imported and domestic beers. Talk about variety! Nestled between the majestic Catskill and Shawangunk mountain ranges in the beautiful Hudson Valley, their full-surround bar and two outdoor patios make a perfect place to kick back after a long hike on a nice spring day.

Grand Cru Beer and Cheese Market, Rhinebeck
The focus at Grand Cru Beer & Cheese Market is on craft beer with over 300 different styles in stock.  We have a rotating selection of 6 craft beers on tap and sell growler fills to go.  Our huge bottle selection is available cold in house or “to go”.  We serve beer, wine and cheese and charcuterie plates in our bar café area with floor to ceiling windows right in the heart of Rhinebeck.
We feature local bites such as fresh baked soft pretzels, homemade caramel corn, stone ground chocolates, hand crafted pickles, venison jerky and other snacks.  Our "Grand Cru Tasting Team" hosts breweries each month with sampling hours and have acoustic music nights and art events.  You will find all of the great Hudson Valley craft breweries here at Grand Cru – either on tap or by the bottle.  You will often see hard to find, special releases as well as we make sure there is always something new to try for the craft beer enthusiast.
Grand Cru is known as a relaxing and uncomplicated local spot – please join us.  Cheers! 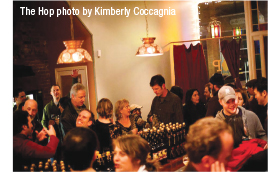 The Hop, Beacon
The Hop is a craft beer and artisanal fare tasting room. They feature over 150 craft beers by the bottle and can and a rotating draft list of nine craft beers for tasting or growler fills. Their website lists the most up-to-date tally of beers currently on tap, with the exact date and time the kegs were tapped. Very nifty. Their snacks are superb — cheeses, chocolates, pickles, house-made sausages — and there is no better place to talk beer.

Hopped Up Cafe, High Falls
Obsessed with delicious craft beer, they have six rotating taps. They also offer growler fills, as well as a great selection of bottles and cans for retail. To keep the local flavor, they specialize in breweries from all over New York. Check out their rustic and comfort foods with seasonal ingredients grown locally from nearby farms, as well as locally smoked meats and a variety of cheeses — a perfect complement to your cold one.

Terrapin, Rhinebeck
Every month, The Terrapin selects a local, craft brewer known as “Terrapin’s Brewer of the Month,” and these beers are available on tap all month. Consider joining the Terrapin Tap Room Club, which entitles you to a special 21-ounce mug and more beer for the same price. Members also get notified in advance about Terrapin’s special beer dinners. Whether you’re in the mood for a casual bistro experience or more formal dining, Terrapin can meet all of your beer needs.

Brew Central
For the true ins and outs of craft beer, you must check out Brew Central at brewcentralny.com to find out what’s on tap in Central New York. Brew Central brings together the stories, traditions, and tastes behind craft beer. Their website includes a comprehensive list of breweries, as well as upcoming events, videos, and even an interactive map! Brew Central puts the Hudson Valley region back on the map with their ever-growing constellation of breweries and craft-centric pubs. They have hot off the press information so you can sit back and enjoy your nice, cold craft beer.