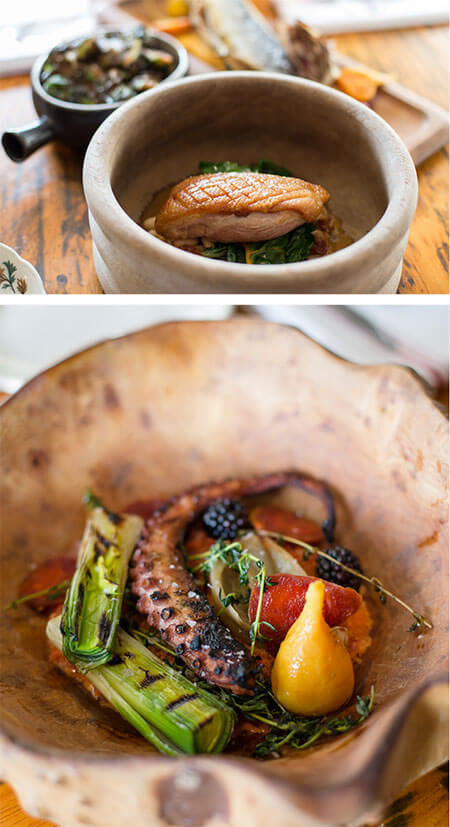 The story of Jessie’s Harvest House in Tannersville is a Catskills classic: The scion of a local legacy business fell in love with a talented chef and took stewardship of a favorite community eatery. It’s also the story of the only place around where you can dine in a heated igloo.

“Sitting in a tent is pretty basic,” reflects Sarah Slutzky DiFalco, “and we wanted to do something a little cooler and funkier. So we stole this idea from a place in Montauk. People are loving it! I get ten emails a day from people asking to reserve one; they’re sold out every weekend. They sell summer covers too, with mesh siding, so we’re looking at that as a possibility.”

Sarah might just have an affinity for all things snowy: Her grandfather Orville and his brother Izzy founded what was then called Hunter Mountain Ski Bowl. Sarah’s hospitality career started there at age 14, and she’s currently senior manager of the premiere resort. Along the way she met Phil DiFalco, a Culinary Institute of America student from Westchester who was familiar with her part of the world from weekend visits with his family during his youth. The two locked eyes in a pub one snowy evening; the rest, they like to say, is history.

Phil had grown up cooking at the elbow of his Grandma Jessie, learning from her how to perfect the Italian concoctions the family loved so much, and after earning a business degree, he realized it was how he wanted to spend every day. After graduating from the CIA, Phil worked at Blue Hill at Stone Barns in Tarrytown and put a fine edge on his farm-to-table magic.

In 2018, the couple purchased the Swiss Chalet, a beloved Tannersville cornerstone that had been run by a husband-and-wife team for 28 years. “The opportunity sort of fell in our laps,” says Sarah. “We opened in December of 2018; our daughter Capri was born just a month before that. She’s three now and incredibly social and comfortable with people. She loves the restaurant.” 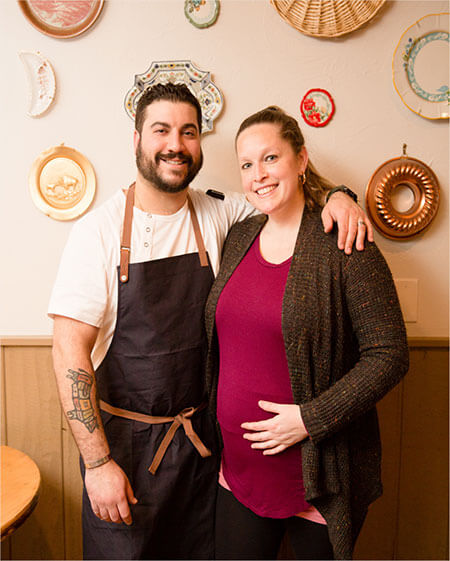 As do lots of satisfied customers. Jessie’s Harvest House, named for Phil’s inspiring grandma, serves American bistro-style, elevated comfort food. “He’s executive chef, and we have a great team working,” says Sarah. “Phil’s all about local sourcing of meat and produce from the farmers markets; he loves figuring out combinations that make for an entirely new dining experience. He has a gift for flavor combinations and a really original mind; his chicken liver cannolis, for example, sold out immediately.”

You’ll find all kinds of surprises on the menu: small plates of crispy brussels sprouts served with banana vinegar and local honey or pork belly steam buns with house-made kimchi, pickled red cabbage and, toasted sesame; full-size entrees like roasted Hudson Valley free-range chicken breast and deconstructed eggplant parmigiana—or a 14-ounce prime ribeye. “There isn’t a better menu anywhere in the state of New York, let alone up as far north as Hunter,” writes a visitor from the city on Yelp. “So fresh, so unique, and so damn tasty.”

“Phil’s all about local sourcing of meat and produce from the farmers’ markets; he loves figuring out combinations that make for an entirely new dining experience.”
–Sarah Slutzky, co-owner

“There isn’t a better menu anywhere in the state of New York, let alone up as far north as Hunter.”
–Yelp review

Lodging is on hold till the pandemic passes, but Sarah says the restaurant is thriving. “We’ve been doing really well—we get a lot of city escapees,” she says. (The same Yelper noted the very COVID-safe dining room experience.) “We’ve added a second deck for outdoor dining, and our second daughter is due in April; Capri is incredibly excited to be a big sister.”

A DAY IN POUGHKEEPSIE

4 WINTER SKI WEEKENDS IN THE CATSKILLS