A Splash of Red 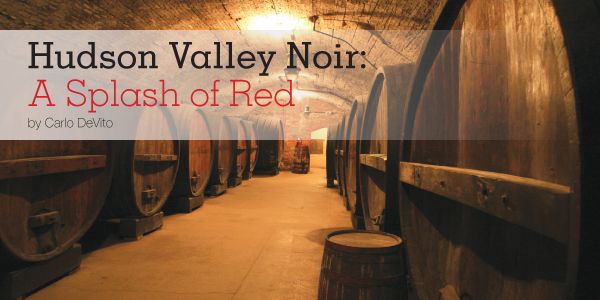 ﻿There is nothing more American than Film Noir. Those classic black and white movies of the 1940s and 1950s, with dark murky scenes flashing spots of silver for light are sheer art. Many of those movies have gone on to become legendary.

Who can forget The Asphalt Jungle (Marilyn Monroe’s first movie, a dark and brooding relentless film); Double Indemnity (Edward G. Robinson, Fred McMurray, and Barbara Stanwyck as the ultimate bad girl); Touch of Evil (Charleton Heston is great, but Marlene Dietrich and Orson Wells steal the show as the aging, disillusioned call girl and the corrupt cop’s fall from power—it doesn’t get any better); the gritty jazz infused The Sweet Smell of Success starring Burt Lancaster as the powerful gossip columnist and his sleazy henchman and unctuous publicity agent Tony Curtis—New York in the 1950s like no one has ever showed it); and the James M. Cain classic The Postman Always Rings Twice with Lana Turner at her sultry best.

The stories always involved murder, with heroes who were always less than reputable, and the women were always more than beautiful. And the dialogue was always snappy and tart. Who can ever forget the opening lines of The Maltese Falcon starring Humphrey Bogart as detective Sam Spade?

Now there is a new noir movement happening today in the Hudson Valley. These aren’t the films of the past, like The Big Sleep or To Have and Have Not or Key Largo, but they are every bit as suave and charming and enduring as Bogie himself.

Today’s classics in the Valley are stars with names like Pinot Noir, Gamay Noir, and Baco Noir. These wines are handsome medium-bodied, dry red wines, with excellent fruit, balanced acidity, and smooth tannins. These are soft approachable reds. They’re great for sipping, but equally impressive with pasta, grilled meats, vegetables, cheese, even fish!

The star of the Valley is Pinot Noir. Pinot Noir is a classic grape of France’s Burgundy region. Some of the world’s most prized wines come from this region. And the Hudson Valley’s Pinot Noirs have similarities with that region. Some of the Valley’s best Pinot Noirs come from the southern and middle parts of the region. Millbrook Winery is located in a renovated Dutch hip dairy barn that has a magnificent view of the vineyards, Catskill Mountains, and rolling hills of Dutchess County. Located on the eastern shore about mid-valley, Millbrook makes two Pinot Noirs. Their premium Pinot Noir has fresh aromas of red raspberry, cherry, and violet, followed by bright flavors of pomegranate, tart cherry with a racy acidity, and a long, fruit-driven finish. A beautiful wine. When the growing season allows, Millbrook also produces three vineyard designate wines in very limited quantities—Block Two West Chardonnay, Block Five East Pinot Noir, and Block Three East Cabernet Franc. Winemaker John Graziano’s super premium Block Five East Pinot Noir is made solely from grapes from the best single block in the vineyard. The wine has won numerous competitions and received rave reviews from many critics.

The winery was founded in 1981 by John S. Dyson, former Deputy Mayor for Economic Development in New York City, as well as former New York State Commissioner of Commerce and Agriculture. It was the first vineyard in the Hudson River region of New York dedicated exclusively to the production of vinifera grapes. Dyson started growing grapes by planting an experimental acre of vinifera grapes at his family farm in Millbrook. In 1979, he purchased a former dairy farm and converted the 1940s-era barn into an efficiently designed modern winery. Millbrook Winery’s first commercial vintage was in 1985 and today it produces over 12,000 cases of wine a year.

Of the estate’s 130 acres, 30 are now planted with grapes. Approximately half of the vineyard is planted with Chardonnay, and the remainder consists of Tocai Friulano, Pinot Noir, and Cabernet Franc. Some of Millbrook’s most highly regarded wines include the New York state appellation and the Proprietor’s Special Reserve versions of Chardonnay, Cabernet Franc, and Pinot Noir.

Just down the road is Oak Summit Vineyard. Owner John Bruno maintains with maniacal attention his five-acre vineyard, which produces some of the best Pinot fruit in the entire region. Accordingly, his Pinot Noir is dark, rich, and incredible. Many wine critics rate his wine as some of the best Pinot Noir New York state has to offer. North of there, in Germantown, is a new spot called Tousey Winery. Ben Peacock and his wife Kimberly oversee this growing family operation with the help of winemaker Bruce Tripp. The Tousey Pinot Noir is very pretty and has been very well received.

Across the river, on the western bank, lies Brotherhood Winery, America’s oldest winery, which had been making wine continuously since 1837. The winery, in Washingtonville, has some of the largest and oldest wine cellars in the United States. CEO Cesar Baeza, winemaker Bob Barrow, and production manager Mark Daigle make their Pinot Noir in a Burgundian style: it’s a light brick-red, dry wine. Surprisingly complex, it is barrel-aged for at least six months. It has a berry nose and a hint of vanilla-oak. It is well balanced and soft in texture.

In Marlboro is Whitecliff Vineyards, named for the beautiful mountain range the vineyard faces. Michael and Yancey Migliore make a lovely Pinot Noir that has gained much press, and they make something called Gamay Noir. Gamay is one of the traditional grapes used to make Beaujolais. Whitecliff’s Gamay Noir is a translucent garnet colored wine, with lots of bright, fresh cherries, and a hint of vanilla. It has refreshing acidity and low tannins. It is a singular wine in the valley and well worth seeking out.

Also in Marlboro is Benmarl Winery, the first Farm Winery in New York, and home of the oldest continuously operating vineyards in the United States, which date back to the mid-1800s. One of Benmarl’s signature wines is Baco Noir.

Baco Noir is the other big red grape in the Valley. Baco Noir is a French-hybrid wine created during the phylloxera (vine louse) epidemic of the mid-1800s. With the fear that noble grapes like Pinot Noir would be killed off by the infestations of their vineyards, French growers demanded vines that could survive. Baco Noir was one of the grapes bred to replace Pinot. However, scientists saved Pinot, and Baco was born. Today there are plantings of Baco in New York, Washington, Oregon, and Canada. Famous wine writers such as Oz Clarke and Matt Kramer are big fans of Baco Noir.

Benmarl’s Baco has had a serious cult following for years. A deep, rich red colored wine with ripe sour cherries on the nose and on the tongue, it’s a dry, medium-bodied wine, much like a rich Pinot or even an Italian Borolo.

Not far from Benmarl is Robibero Family Vineyards, a family run business owned by Harry and Carole Robibero. You’ll want to try their Rabbit’s Foot, an incredibly smooth blend of 75% Baco Noir mixed with 15% Merlot and 10% Cabernet Sauvignon. A bright sour cherry gives way to a beautiful velvety texture.

Adair Vineyards is close by, where owner Marc Stopkie also makes a rich, rewarding Baco Noir. And south of Adair is Warwick Valley Winery & Distillery, where the Black Dirt red is a nice, Beaujolais-styled Baco, light, fruity, and dry. It, rightly, has won much critical praise.

Two other notable Baco producers are back on the northeast side of the river near the Berkshires. First is Hudson-Chatham Winery, Columbia County’s first winery, in Ghent. They make three incredible Baco Noirs guided by the hands of award-winning winemaker and grower Steve Casscles. Casscles has been making Baco Noir since the late 1970s, at Benmarl. At Hudson-Chatham he produces three single vineyard wines: Baco Reserve, Casscles Vineyard; Baco Old Vines; and Field Stone Baco Noir. The Reserve is made from Casscles’s vineyard, and produces a highly acclaimed bright sour cherry-styled, dry red wine much like a Burgundy. This is one of the prize wines of the winery. The Old Vines, made from 60-year-old vines, has a dark sour cherry profile with a black pepper finish. Last is the Field Stone Baco Noir, which is aged with large river rocks dug up on the farm, and kiln-baked, hand-hewn local oak. This is a small production, high quality wine that is incredibly popular.

Just north is Castleton-on-Hudson where Brookview Station Winery also produces a Baco Noir. Brookview is located at Goold Orchards, one of the centenary apple farms in the region. Ed and Sue Miller are third generation owners. Their Baco Noir is a dark version of the classic grape, and a real winner.

At the end of the Maltese Falcon, Bogart says to the film’s femme fatale, “I hope they don’t hang you, precious, by that sweet neck. Yes, angel, I’m gonna send you over. The chances are you’ll get off with life. That means if you’re a good girl, you’ll be out in 20 years. I’ll be waiting for you. If they hang you, I’ll always remember you.” Yes, these are wines to die for. And you’ll always remember them.

Where can I find these wines?
Shawangunk Trail: Located on the river’s western bank in the mid-Hudson Valley, the Shawangunk is the valley’s largest wine trail. Adair, Benmarl, Brotherhood, Warwick Valley, and Whitecliff are all on this trail.

Dutchess Wine Trail: Located in Dutchess County, Millbrook is on the trail, while Oak Summit lies nearby (appointment only).

Hudson Berkshire Beverage Trail: This trail includes a distillery and a brewery, and straddles the Hudson Valley and Berkshires. Hudson-Chatham and Brookview are both on this trail. Tousey lies south of these.

Classic Film Noir
Here’s a few great noir films to snuggle up with while enjoying a bottle of Hudson Valley red.

Touch of Evil:
Marlene Dietrich and Orson Wells: it doesn’t get any better

The Sweet Smell of Success:
Burt Lancaster and Tony Curtis—gritty jazz;
New York in the 1950s

Your car, Our driver