From the time of Henry Hudson’s trip up the mighty river until today, the Hudson River is one of the most important commercial and recreational rivers in America.

All of the activity and industrial momentum would have ground to a halt if not for the lonely sentinels of the Hudson marking the way and warning ships of the hazards and channels. Over the centuries, many lighthouses have come and gone; through fire and flood, through storm and accident, the lighthouses have stood their ground, sending their beacons to guide the ships and barks plying the waters of the Hudson.

Now, out of the eight lighthouses still remaining along the Hudson River, four are located in the Mid-Hudson Valley. No longer serving their original purpose as aids to navigation, they now mark the passage of the history of America past their lights and horns. 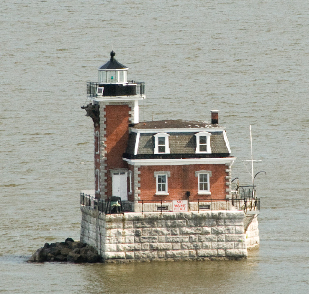 In the late 1880s, hazards created by the Middle Ground Flats opposite the City of Hudson made navigating on the Hudson River extremely risky for the busy shipping route. After much petitioning to the Congress of the United States, a survey was completed and an appropriation of $35,000.00 was approved by Congress in 1872 to build the Hudson City Lighthouse.

Construction began in early 1873. Pilings were driven some fifty feet into the riverbed and then surrounded by a granite pier. The keeper’s dwelling was then constructed on top of the man-made pier. The north end of the lighthouse base was designed like a bow of a ship. This was done to protect the lighthouse from the frequent ice flows in winter and spring.

Built in the Second Empire architectural style, the two-story brick and granite structure sits majestically in the middle of the river between Hudson and Athens. The lighthouse was put into operation on November 14, 1874 with Henry D. Best as its first keeper. It was automated on November 10, 1949, almost 75 years to the date on which it was first lighted. Today, the lighthouse still serves as an aid to navigation, guiding ships safely around the Middle Ground Flats.

Since its opening, the Hudson-Athens Lighthouse has been operated and maintained by the United States Coast Guard. However, in 1967, then Governor Nelson A. Rockefeller, established the Hudson River Valley Commission to explore possible uses for the Hudson Lighthouses. The Commission recommended that the Coast Guard deed over or lease the facilities to public or private not-for-profit groups. These groups would then rehabilitate, maintain, and operate the facilities for public benefit.

Not until 1982 did any local group seriously attempt to follow through with the recommendations of the Hudson River Valley Commission. At that time, a group of citizens from Columbia and Greene counties formed the Hudson-Athens Lighthouse Preservation Committee, Inc. In 1989, HALPC was awarded a matching grant by the NYS Historic Preservation Office. The restoration work was completed in 1990. Today, the lighthouse title was transferred as part of the Congressional Appropriations Act of 1999. The US Coast Guard has officially transferred the deed as of July 3, 2000.

Visiting the Hudson-Athens Lighthouse:  Please call 518-828-5294 to make arrangements for a private tour or for information about public tours. 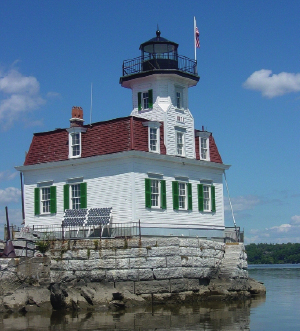 The Esopus Meadows Lighthouse was nicknamed the “Maid of the Meadows.” It was finished in 1871 to replace one built in 1839 that was in ruinous condition. A lighthouse was needed to warn mariners of the mud flats, known as the Esopus Meadows, located between it and the western shore of the Hudson River. As the lighthouse was and is only accessible by water, it was created as a “family lighthouse.” The keeper and his family were living within the structure. The keeper’s house consisted of seven rooms with a kitchen, dining and sitting room on the first floor, and bedrooms on the second. The Esopus Meadows Lighthouse is the only lighthouse built with a wood frame and clapboard exterior remaining on the Hudson River.

The lighthouse was tended by family keepers as part of the Lighthouse Service until around World War II when the Coast Guard took over the Lighthouse Service. The Coast Guard manned the station until 1965. At that time the tower light was replaced with a solar powered navigation aid on the deck and the house was abandoned. Although only accessible by boat, without the care of resident keepers, the lighthouse decayed under the ruinous hands of vandals and Mother Nature.

In 1979 the Esopus Meadows Lighthouse was listed on the National Register of Historic Places. Restoration began in 1990 with the formation of Save Esopus Lighthouse Commission (SELC) and leasing of the lighthouse from the Coast Guard. Under direction of Arline Fitzpatrick funds were raised for extensive carpentry and roof repair. SELC was reorganized in 1997 and restoration continued. By the fall of 2000 a major milestone was reached with completion of the stabilization and leveling of the lighthouse.

More milestones occurred in July 2001 when the organization received a New York State Board of Regents provisional charter as a museum in the name of Esopus Meadows Lighthouse (EML). Then in September 2002 the deed to the lighthouse was formally presented to EML.

Possibly the most rewarding milestone occurred on May 31, 2003 when the Coast Guard reinstalled a navigation light in the tower and Esopus Meadows Lighthouse, after 38 years of darkness, again became an active navigation aid.

Restoration work has continued, mostly by volunteers, and has progressed to the point that scheduled tours began in the summer of 2010. While tours have started, there is still a bit more restoration that needs to be completed, routine maintenance to be performed, and various help for running the tours. For more information, to volunteer, or take a tour call 845-848-3669.  More information is also available at www.EsopusMeadowsLighthouse.org. 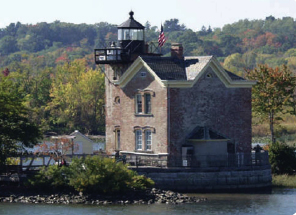 The present lighthouse was built in 1869. It sits on a massive circular stone base sixty feet in diameter. A sixth-order Fresnel lens was used with kerosene lamps. The foundation for the original lighthouse remains as a small island adjacent to the existing lighthouse. Automation of the light in 1954 made light keepers obsolete. The building was closed up and fell into disrepair and decay. Local historian Ruth Reynolds Glunt and architect Elise Barry succeeded in placing the lighthouse on the National Register in 1978. This stimulated local citizens to restore the building. In 1986 the newly formed Saugerties Lighthouse Conservancy acquired the lighthouse and the adjacent wetlands. After extensive fundraising and restoration work the building was completely reconstructed. After 36 years the light was restored to operation in the light tower on August 4, 1990.

Visiting the lighthouse is a pleasant and educational experience. Visitors can walk out to the lighthouse on the Nature Trail at any time. One can walk around the lighthouse and visit the island, the site of the original 1838 lighthouse. Benches and chairs are in place for relaxing and enjoying the views. 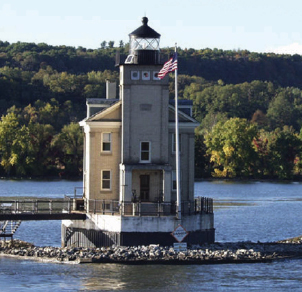 The first Rondout Lighthouse was constructed in 1837 of wood. This structure was quickly damaged by weather and ice. It was replaced in 1867 with a new lighthouse constructed of bluestone on a cut stone base. Both of these lighthouses were located on the Hudson River at the south side of Rondout Creek, much nearer to the shore than the current lighthouse. The circular stone base of the second lighthouse can still be seen.

The newest lighthouse on the Hudson River, started in 1913 and finished and commissioned in 1915, the current Rondout Lighthouse continues an important tradition started in 1837 of marking the vital river port of the Kingston Rondout. The Rondout was the terminus of the D&H Canal with the canal transporting vast amounts of Pennsylvania coal over the Shawangunk Mountains to the Hudson. From here, the canal barges were unloaded and the coal was transferred to river barks that took the coal down to NYC. In 2002 the US Coast Guard turned over ownership of the lighthouse to the City of Kingston, which partners with the Hudson River Maritime Museum to care for the structure. Although uninhabited, the lighthouse remains an important aid to navigation on the Hudson River and stands as a sentinel at the mouth of the Rondout Creek. The lighthouse brings back memories of paddle wheel steamboats and sailing ships.

Hiking with kids in the HV

SPRING PLANTS FOR YOUR CONTAINERS