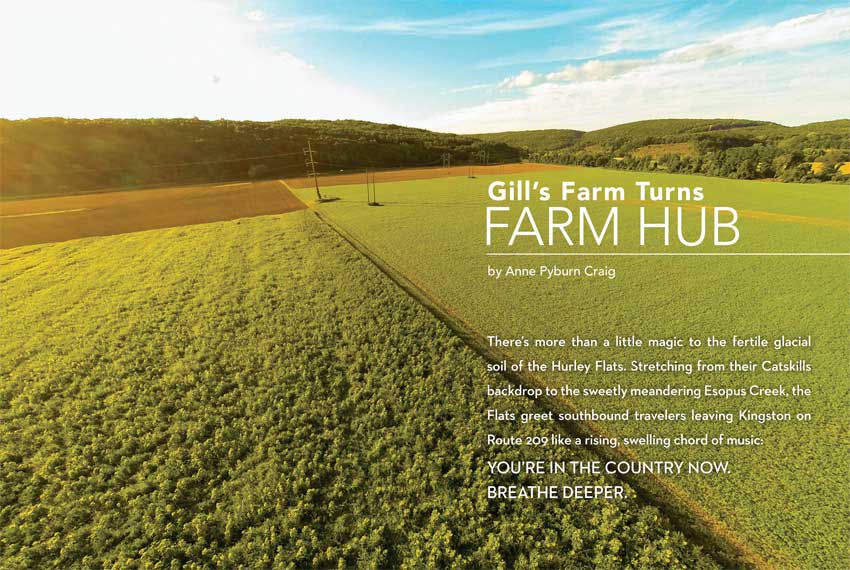 There’s more than a little magic to the fertile glacial soil of the Hurley Flats. Stretching from their Catskills backdrop to the sweetly meandering Esopus Creek, the Flats greet southbound travelers leaving Kingston on Route 209 like a rising, swelling chord of music:
YOU’RE IN THE COUNTRY NOW.
BREATHE DEEPER.

FOR THOUSANDS OF YEARS, THIS LAND HAS NOURISHED HUNGRY HUMANS. The Lenape grew corn, beans, and squash here. The Colonials grew grain, and the Flats were the colony’s breadbasket for a time. As Midwesterners cornered the grain market, the Flats segued back into corn and into hay. In 1938, a young man named John Gill got started there with sweet corn, tomatoes, and cabbage. He did well, especially with the corn, and passed a thriving farm to his son Jack, who developed a reputation as an innovator.

In the 1970s, Jack’s son came home to Hurley with a degree in agriculture and a head full of ideas. Much came to fruition throughout the intervening years: a farm stand, more mixed veggies (Gill’s Farm became well-known for meltingly tasty sweet corn), and good times—such as the creation of a Pumpkin Cannon, memorable free concerts by Levon Helm’s Electric Dirt Band, and a star turn on the Colbert Report.

Then, in late 2013, the Rondout Valley scene was rocked by the news that the Gill Farm—nowadays stretching its 1,200 acres through four municipalities— had been sold. Not, mind you, to some paradise- paving housing developer, but to the NoVo Foundation for the establishment of a non-profit farm hub under the stewardship of the New World Foundation’s Local Economies Project.

Oh, said everyone. A what? It had the word farm in it, which was a very good sign indeed. But the sudden emergence on this ancient agricultural stage of a player with deep pockets and complicated plans has had some scratching their heads—just as some probably did when Jack Gill brought in the first mechanical sweet corn harvesters in the state or when young John replaced the little roadside corn shack with a full-fledged farm market.

The Farm Hub is in its second season now, and to folks just driving by, it may not look as though all that much has changed on the Flats. Which is fine: appearance-wise, it’s hard to improve on perfection.

BUT WITHIN THE SERENITY OF THAT CLASSIC SOOTHING VIEW SHED, THERE ARE SOME BIG DOINGS AFOOT.

THE GOAL: MAKING LOCAL FARMING MORE VIABLE, EFFICIENT, AND EXPERT AND HELPING GET BETTER FOOD TO EVERYONE FROM NEW YORK CITY GOURMANDS AND TOURISTS TO SCHOOL KIDS AND HUNGRY PEOPLE.

A small grains project is scaling up, in collaboration with Cornell University. Formal farmer training is in the planning stage. Topical gatherings for existing farmers are being planned around subjects like soil health, vegetable production methods and equipment, and grains. The farm stand will be offering not just the familiar fresh and delicious products but information and community events.

Like any tenderly nurtured crop, a farm hub takes time to grow. Stop in at the stand on Route 209, get the latest word, cheer them on, and bring home some sweet corn and tomatoes. And, yes, they’ll be lining Route 209 with sunflowers again this year. And somewhere, it seems very likely that John Senior and Jack are grinning from ear to ear. 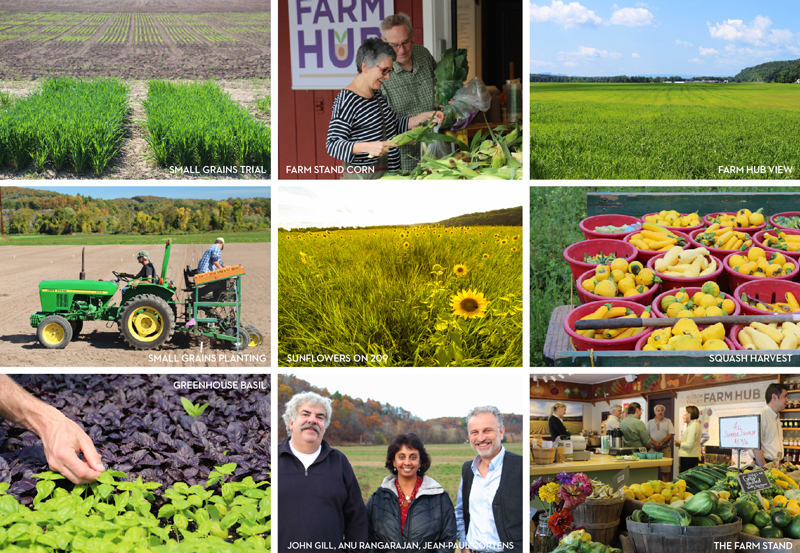 Feeding Each Other In These Times