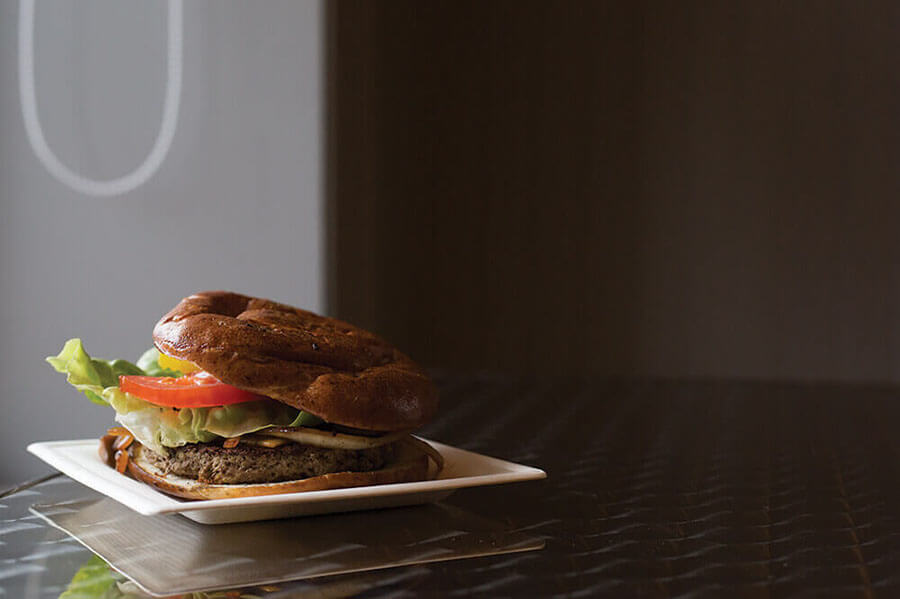 Eager to eat healthier and save the planet, but madly in love with comfort food? Involved in a mixed veggie/carnivore relationship of some sort that makes eating out together tough? Fear not—the WildFlower Cafe in Red Hook offers guilt-free and nutritious burgers, sandwiches, and sides. You never knew vegan food could be like this.

Bobbi Jo Forte has already established a loyal following with her other two Red Hook businesses that are equally unique: Living Eden, which offers a wide variety of fair-trade, eco-friendly, handcrafted, upcycled, and cruelty-free clothing, accessories, gifts, and yarns, and Morgan’s Cat Cafe, a recently-renovated cat rescue and adoption center upstairs from WildFlower, where people are invited to relax and spend time with cats.

With the opening of WildFlower Cafe, Bobbi Jo and her team are staying true to their guiding ethics. “We’re using our years of experience as entrepreneurs, animal lovers, and believers in a ‘do-good’ philosophy to make a positive impact on our community, planet, and the lives of creatures who simply speak a different language,” she says. “WildFlower Cafe is all- American comfort food with a healthy spin.”

The menu reads much like that of your favorite pub: burgers, fully loaded franks, onion rings, and fries. Look a little closer: those are “fishless” filets and flame-broiled vegan burgers, and the Avocado Chik’n BLT features “fakin’ bacon.” Bobbi Jo is confident that one bite will be enough to entice even folks who have hitherto considered themselves complete carnivores.

“Personally, I don’t like the word ‘vegan,’” Bobbi Jo says. “It has a long history of being harsh and inaccessible. We are raised being told vegetables are good, yet there is a stigma with people who continue that plant-based diet in adulthood.”

WildFlower was born when the opportunity arose to relocate Morgan’s Cat Cafe to the third floor of 35 West Market Street in Red Hook, a building owned by Bobbi Jo’s business partner Bonnie Schweppe and her husband Mike. “The space was huge, about four times the size of the downstairs. The cats are so much happier,” says Bobbi Jo.

But the partners didn’t want the first floor to sit empty, and knew that a cafe was the right use. “Staying true to our devotion to animals, there was no question it had to remain plant-based. So we started talking to local chefs and seeing if anyone was interested in the space. We got nowhere. So we started talking about the menu.... We attended a food show, and one day over lunch we realized that comfort food and ‘all-American food’ had mass appeal. We talked about how to appeal to a broad audience, and the ‘burger bar’ concept was born. We took the concept from idea to opening in 12 weeks with lots of hard work, ‘analysis paralysis,’ and fine tuning.”

Guilt-free and nutritious vegan burgers, sandwiches, and sides....You never knew vegan food could be this good.

It’s a bold idea, but when it comes to building a better world, Bobbi Jo is a bold soul. For more than two decades she’s been deeply involved in animal rescue, helping dogs for a decade in Arizona, and shifting her focus to felines when she returned to her native Hudson Valley.

Named a Hudson Valley Hero by Hudson Valley Magazine in 2016, she explained that growing up poor in Elizaville left her with a deep and intense commitment to animal welfare. “Watching the pets my family couldn’t provide food for slowly deteriorate was traumatizing for me,” she told the magazine.

Instead of ignoring and trying to forget that painful experience, she’s harnessed it in the service of animals in need and is raising her tween-age daughter (the Morgan of Morgan’s Cat Cafe) to share her fiercely loving approach to life.

A self-described “serial entrepreneur” since age 24, Bobbi Jo has put a lot of thought into what makes a great Hudson Valley burger bar. “We’re using technology to our advantage,” she says. “Our online and mobile ordering platforms allow people to order in advance and pay at pick up. That’s important. 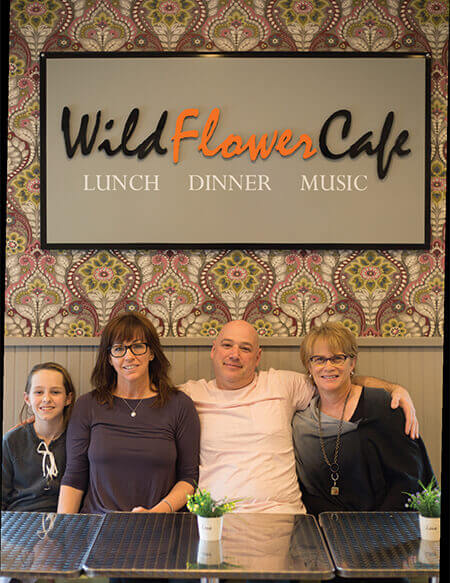 That experience—a plant-based burger bar—is likely to be a brand-new one for many. The minds behind WildFlower, including business partner Martin Pucino who built the space and now cooks these vegan creations with love, have put considerable thought into the paradox involved. “We understand it is not realistic to convert meat lovers to vegans; however, we want to give them a positive experience consuming plant-based foods,” she says. “Creating a menu that appealed to meat eaters without alienating vegans was a challenge; creating a menu that appealed to vegans without alienating meat lovers was a challenge. I believe we found the perfect marketing approach, and that’s showing in our customer interactions and feedback. The ‘wow’ factor is in place from both markets.”

“What makes us different is our subtlety,” says Bobbi Jo. “When you walk in and read our menu it doesn’t scream vegan or plant-based. That was deliberate. Our menu items are described as ‘Chik’n’, ‘Fishless Fillet’ and so on, so customers are familiar with the food types. We have posters explaining why our plant-based burgers are unique, healthier, and better for the environment and animals.” Through running the Cat Cafe, she’s discovered suppliers of lesser-known vegan products that bring the zing. There’s a handy reference book listing every recipe’s ingredients, so that those who need to avoid soy, nuts, or wheat can order without fear.

In between the opening of Living Eden (“a place for human(e) beings”) and getting Morgan’s Cat Cafe up and running, Bobbi Jo hit a crisis that might have stopped many in their tracks. First, both she and Morgan had bouts with viral meningitis; soon after, Bobbi Jo got the news that she had a rare brain tumor and would have to undergo radiation.

Soon after, Bobbi Jo got the news that she had a rare brain tumor and would have to undergo radiation.

The Red Hook community rallied around her, and deepened her appreciation of the two-legged creatures in her circle. “I love most of all the fact that I’m working with people I enjoy,” she says. “Bonnie Schweppe and I have been business partners for over 5 years. Martin Pucino and I were friends for a couple of years and we’re now a couple. My daughter works the register with me; she’s 11 and an entrepreneur in spirit.

And our employees are amazing. So far, they all started off as volunteers for Morgan’s Cat Cafe; they’re kind, trustworthy, vested, and fun to be around. They like working at the cafe because we’re great to them.”

Being great to one another is very much the underlying philosophy of the whole endeavor, and Bobbi Jo knows that the food has to be equally great. “If you offer vegan menu items, they need to impress,” she says.

“Vegans and vegetarians are far too often disappointed in the limited options on menus and, yes, they take it personally. I’d like to invite everyone to take the challenge: check out our claim that we offer the best burgers in the Hudson Valley. I think most people want to feel good about their choices, and there’s so much upside to dining at our place. When you factor in flavor, environmental impact, price, nutrition, quality—hands down we are the best!”

Whether you’re looking to satisfy your hunger with a healthier option, craving a refreshment on a warm day (Did we mention the vegan shakes? Yum!), or looking for a place to relax, WildFlower offers quality items that are sure to make you feel good.

They also have a Tea Club: purchase a BPA-free mug and enjoy half-price refills thereafter. Then walk upstairs and say hi to the cats in their spacious and lofty new digs. You’ll be surrounded with the vitality of dreams brought to life. 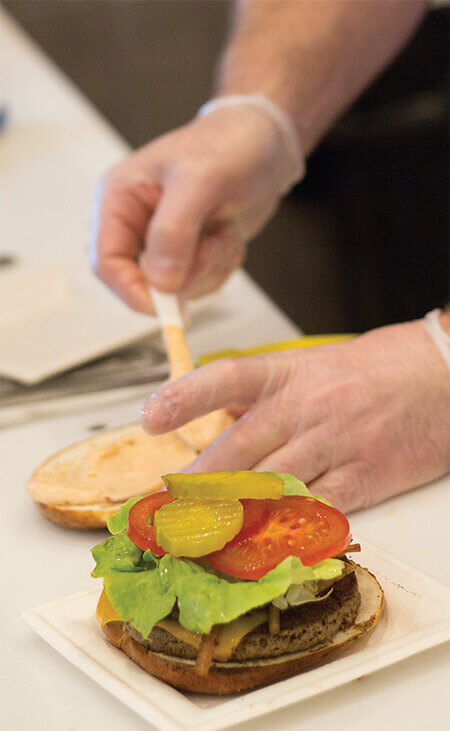 “Personally, I don’t like the word ‘vegan’. It has a long history of being harsh and inaccessible. ”

Treat Yourself: hudson valley meals for $13 and under