When driving down Route 9W in Marlboro, it’s hard to miss the building with the pointed roof illuminated by green lights. It’s Tony Falco’s place, where you can drop in on most nights, take a seat, and listen to some good rock-and-roll, blues, jazz, and just about any other kind of music.

The Falcon story started in 2001, when Tony began throwing concerts inside the large carriage house he constructed behind his home. He had previously tried hosting concerts at a 19th century Methodist church in Marlboro, but that never quite got off the ground. After building the carriage house, however, Tony featured stars like Joe Lovano and Brad Mehldau, striking up a buzz that didn’t die.

“i learned from the house concerts that people really hunger for quality and community,”

Tony says. “And there were so many artists that wanted to perform at a space that was really welcoming to them.” 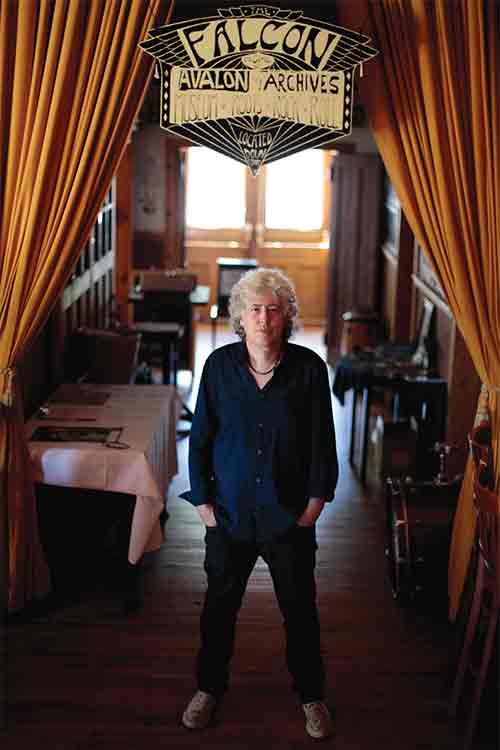 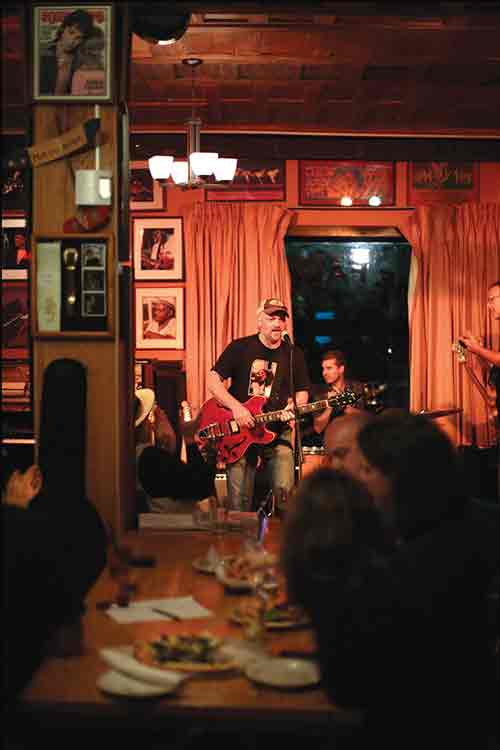 all of the money in the donation box goes to the artists, and tony’s credo of “support living artists” has become a life’s mission.

In 2005, Tony purchased The Falcon’s current location, a 19th century button factory near the 150-foot Marlboro Falls. Hosting multiple concerts each week and refusing to sell tickets—instead, sticking a donation box at the front of the venue—Tony drew impressive crowds. Musicians continued to show up, from David Bromberg, to Marshall Crenshaw, to Pat Metheny. Almost instantly, The Falcon became a hot music venue in the New York metropolitan area.

The Falcon’s donation box is key to the venue’s success. All of the money in it goes to the artists, and Tony’s credo of “support living artists” has become a life’s mission.

That, Tony says, has something to do with his father, who sang and played bass with a Staten Island band called The Keynotes. Young Tony saw firsthand the long hours, low pay, and high stress that comes with being a working artist. In addition to the donations at The Falcon, artists have a shower, an overnight stay if they need it, and gracious hosts in Tony and his wife, Julie.

All of this keeps musicians returning, which means more art for the community—and that’s Tony’s mission.

“The arts make us better people, and having a place to commune and enjoy the arts together with others is almost a spiritual experience,” Tony says.

Tony has expanded the venue to include a lower-floor beer hall with 16 taps and strictly New York beer, wine, and spirits.

Breweries represented include Newburgh, Keegan Ales, and the Sloop Brewing Company. The beer hall menu includes casual fare like burgers and fries, while the main kitchen upstairs cooks up yummies like fish tacos, ribs, fresh pasta, and crab cake sandwiches. All of the food is locally sourced, like meat from the Hudson Valley Cattle Company and vegetables from Hepworth Farms.

The beer hall is also home to the Avalon Archives, a rock-and-roll museum originally located at the Tilly Foster Farm in Brewster. Ned Moran, curator of the Avalon Archives, moved to The Falcon his stash, which includes guitars played by Bob Dylan and Jorma Kaukonen of Jefferson Airplane and a Grammy award won by The Band. Visitors can also peruse the more than 1,000 vinyl records,and, if interested, they can drop the needle on one to play for the room.

the food is locally sourced, like meat from the hudson
valley cattle company and veggies from hepworth farms. 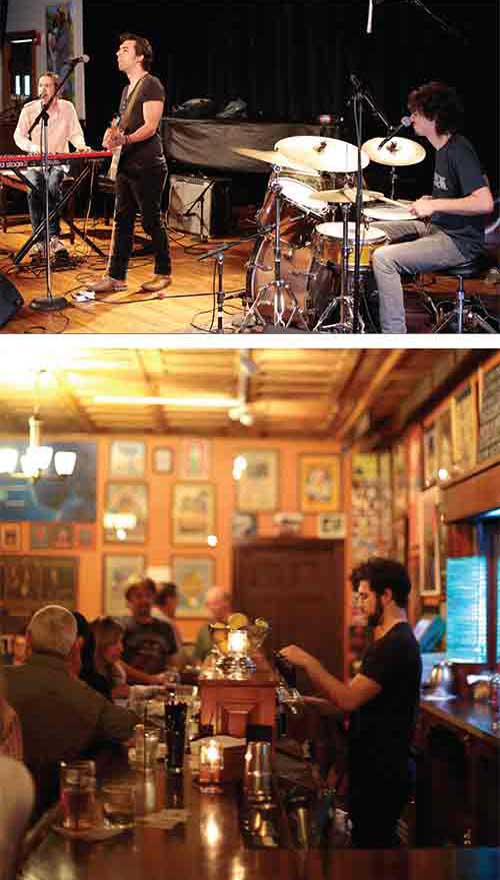 The Falcon also has a new deck overlooking the Lattintown Creek, and visitors can walk from the deck down to the Marlboro Falls. The former deck, built in the venue’s first years, was destroyed by Hurricane Irene, but it’s now been rebuilt bigger and better.

There’s music at The Falcon at least six days a week, and the venue hosts multiple shows on some nights. On Wednesday nights, The Falcon hosts a rotating show downstairs in the beer hall, featuring a songwriter’s showcase, live poetry, a jazz session, and a blues session, depending on the week. On Sundays, the venue opens at 10am for brunch with a live performance that can range in genre from southern blues to gospel.

Throughout the variety, the mission to support living artists remains. Local artists are

“having a place to commune and enjoy the arts together with others is almost a spiritual experience,” tony says.

featured on the walls; buy a piece and the money goes completely to the artist. The donation box fills up for the performers, and anyone can come in to watch the show.

“I don’t look at my patrons as ‘how much they put into the box,’” Tony says. “As long as they’re respectful and listen to what’s going on, I don’t care if they sit in the front and sip water. I’m so proud of having a place where people can hear quality music, and I’m not abusing that privilege.”

Treat Yourself: hudson valley meals for $13 and under