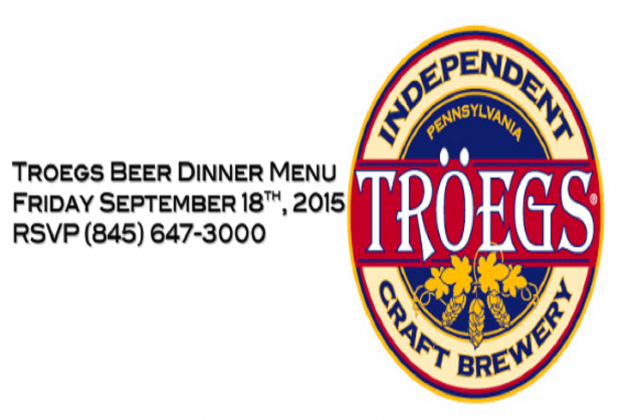 
We are featuring Troegs, a Pennsylvania brewery, for our September 2015 beer dinner. Troegs makes great beer and they not that far away. We look forward to their Mad Elf ever winter at Aroma Thyme. Here is the rundown for the dinner. Five courses with five beers. Dinner starts at 7pm. The price is $49 per person.
Call 845 647 3000 to RSVP.

Chris and John Trogner have been working hard to get Central Pennsylvania on the brewing map. Since 1997, these Mechanicsburg natives have been handcrafting world-class beers that combine traditional English brewing techniques with the eclecticism of new American brewing. But how they reached this point is as compelling as where they are headed.

Chris and John, 18 months apart in age, were simultaneously intrigued by the art of handcrafting beer while living some 1,750 miles apart—Chris in Boulder, Colorado and John in Philadelphia.

John, the older brother, often found relief from his not-so-satisfying work in the Philadelphia real estate market at the nearby Dock Street Brewpub. At the same time, Philadelphia was proving to be a booming beer city with dozens of neighborhood bars that cared as much about beer as they did about food.

Chris was drawn to Colorado for the skiing opportunities, as well as educational ones. In between the two, he found himself in the midst of craft-brewing nirvana as more than 100 breweries appeared throughout the state.

As Chris and John would talk, a flicker of an idea gradually turned into a full-blown business plan. The brothers had always dreamed about starting a business together, and now they had brewed the perfect idea.

John moved to Boulder, and within days secured a job cleaning tanks at the Oasis Brewpub. Over the next three years he would learn the brewing business from the inside out. Along the way, he took brewing classes at the University of California at Davis and Chicago’s Siebel Institute of Technology.

With John knee-deep in yeast, hops and barley, Chris focused on marketing, sales and management classes. He also managed a restaurant to determine whether a brewpub or a brewery would be a better business model. The brothers decided to leave the food to someone else and focus on beer. After graduating, Chris went to England to take an intensive brewing class at the University of Sunderland.

The brothers needed to decide where to build the brewery; and while Colorado offered the right audience, it also meant a lot of competition. After a lot of thought, Chris and John decided to return to their roots and use their brewing skills in the Mid-Atlantic States.