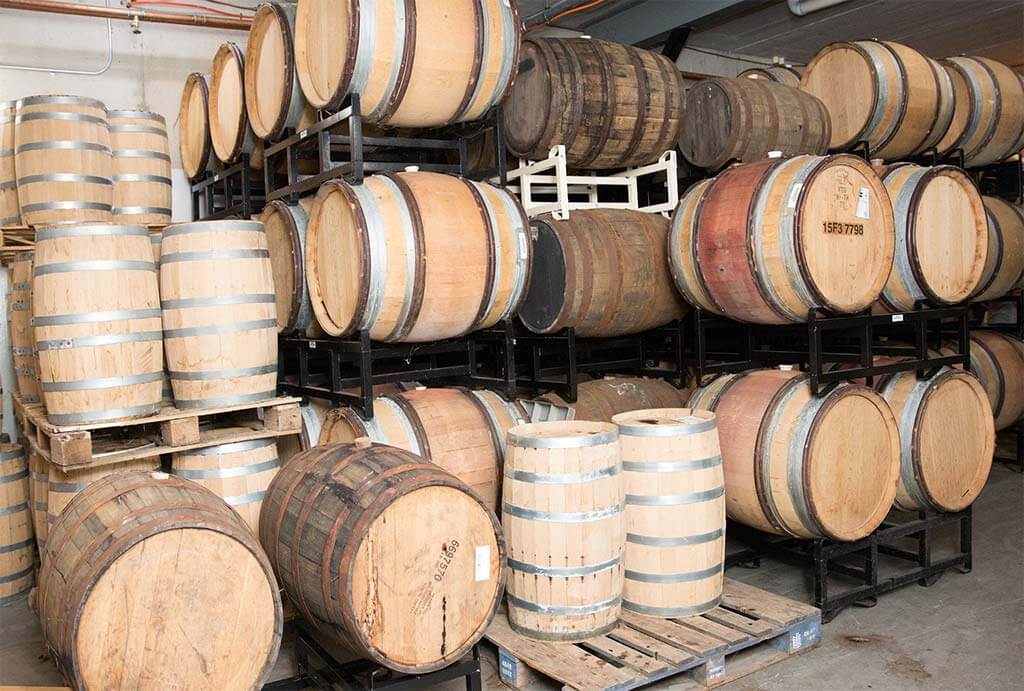 The winery and tasting room opened to the public in 2006, and Stoutridge has been producing award-winning natural wines since then. In 2017, they added a distillery producing fine brandy, absinthe, and whiskey.

Marlboro, NY was wine country before the U.S. was a country at all. “Benmarl is the oldest vineyard in America, and we’re not far behind,” says Kim Wagner, who founded Stoutridge with her husband Steve Osborn in 2000. “This land was cultivated in the 1700s; we’ve found evidence there were vineyards.” Tucked away on a quiet lane in the hills, the farmhouse was built in the mid-1800s, and what’s now Stoutridge was part of an 80-acre fruit farm. In 1902, the land was sold to Vincenzo Marino, who produced wine there until Prohibition.

“After Prohibition, the land was seized by the Feds—we were the southernmost part of Legs Diamond’s territory, and all the farmers brought their jugs here,” Wagner says. “It’s a very secluded spot.” Secluded it still is, and when Wagner and Osborn discovered it, they knew it was the place to craft their world. Osborn is winemaker and master distiller, while Wagner handles the red tape; hospitality in the tasting room, and guest services in general, are shared. From the first, the couple—both chemists by training—knew they wanted to do things a little differently. “It’s ironic,” says Wagner, “that two chemists would decide to make wine using the least possible chemistry. But it’s because we know.”

Stoutridge wines are low-intervention. “We just add yeast and wait,” says Wagner. “No sulfites or other chemicals. We can’t ship our wines, because commercial wine needs to be stabilized to 170 degrees to survive in the back of a delivery truck. They’re terrific wines, very food-friendly, but you have to come to our tasting room to get them.” 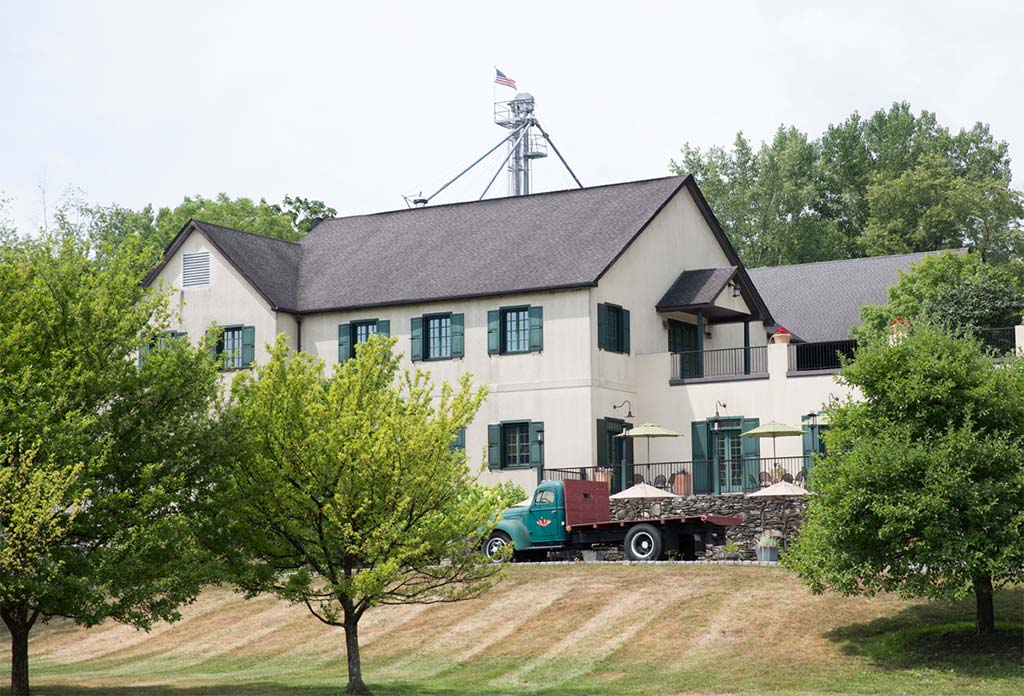 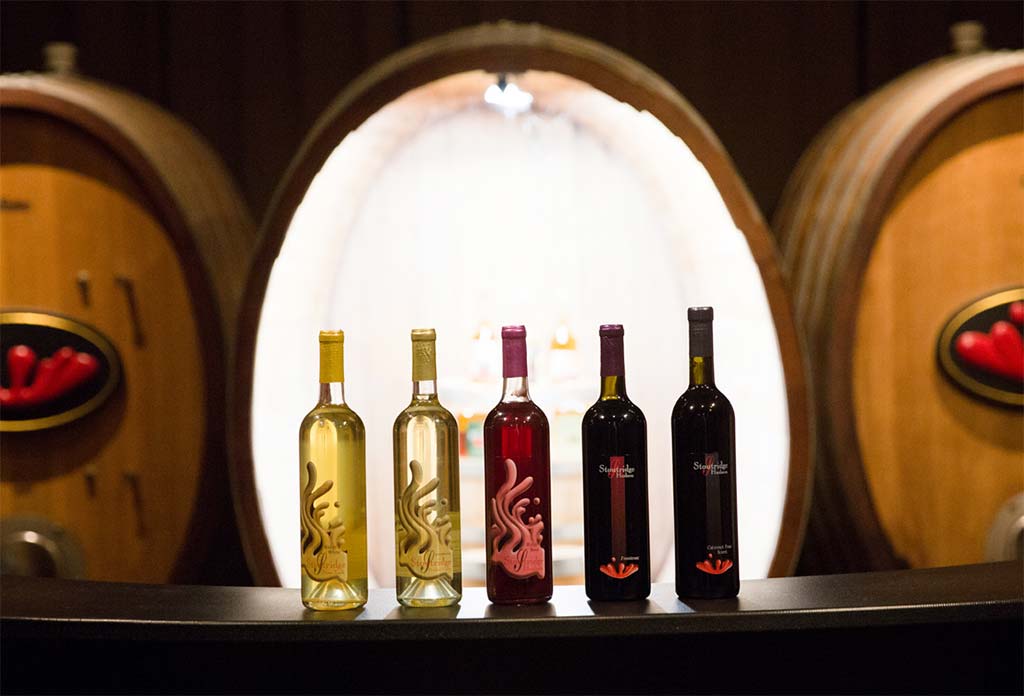 “We work with competition bartenders and ask them what they can’t find but wish they had.” – Stoutridge Co-owner Kim Wagner

It’s certainly worth the trip. The winery and tasting room opened to the public in 2006, and Stoutridge has been producing award-winning natural wines since then. In 2017, they added a distillery producing fine brandy, absinthe, and whiskey; just this year, they returned from the 2022 Finger Lakes International Wine & Spirits Competition with gold medals in every category they make and a double gold for their Vincent Grappa. Adding the distillery, says Wagner, has ripened their always-robust collaboration with local farms. “We buy up the fruit that might not look right for the market and transform it into European-style brandies,” she says. “It’s a win/win. We just bring a bin to the packing house and leave it there for the rejects, meaning the farmer can make some money on fruit that would otherwise go to waste. There might be six different varieties in there.”

Local sourcing and sustainable production methods are what Stoutridge is all about. The low-intervention route is challenging, but Wagner says the view from the high road is lovely, along with the flavor. “Our spirits are traditional, and they taste like better versions of things you can buy at the store,” she says. “Our grain is all local too, and 90 percent of it is from the Hudson Valley; the whiskey is aged in Hudson Valley-grown oak barrels from Quercus Cooperage. So these really are all-local products, and the results are delicious.”

The low-intervention gravity-flow methods used at Stoutridge wouldn’t sustain a commercial winery, although Wagner’s not about to put down larger-scale operations. “They have to do things the way they do to survive,” she says. “It’s because it’s just the two of us that we can be so flexible—we’re free to create and innovate. And we’d always rather make a smaller batch of something truly fine than a larger batch that tastes the same as the mainstream commercial product.”

“After Prohibition, the land was seized by the Feds—we were the southernmost part of Legs Diamond’s territory, and all the farmers brought their jugs here. It’s a very secluded spot.” – Stoutridge Co-owner Kim Wagner 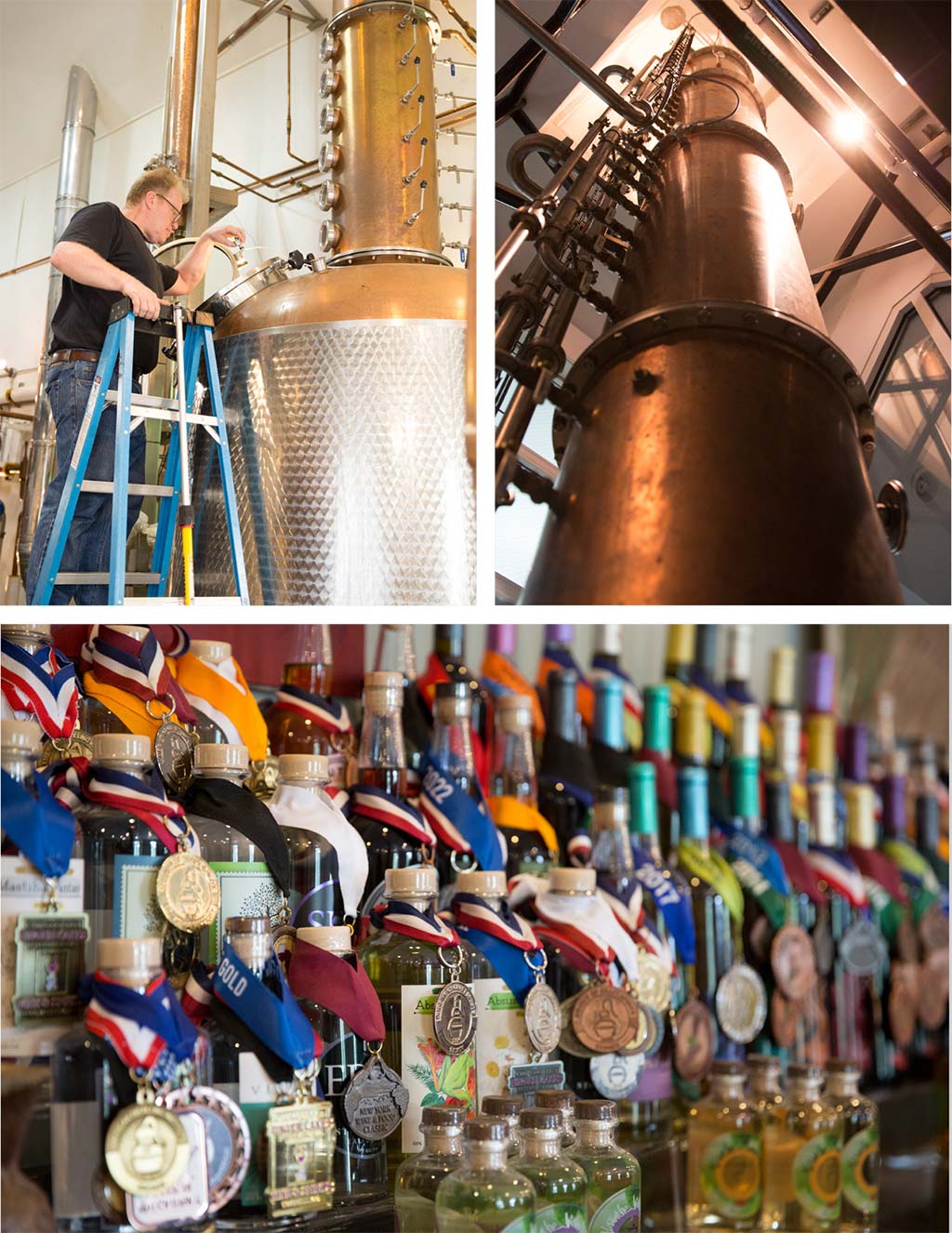 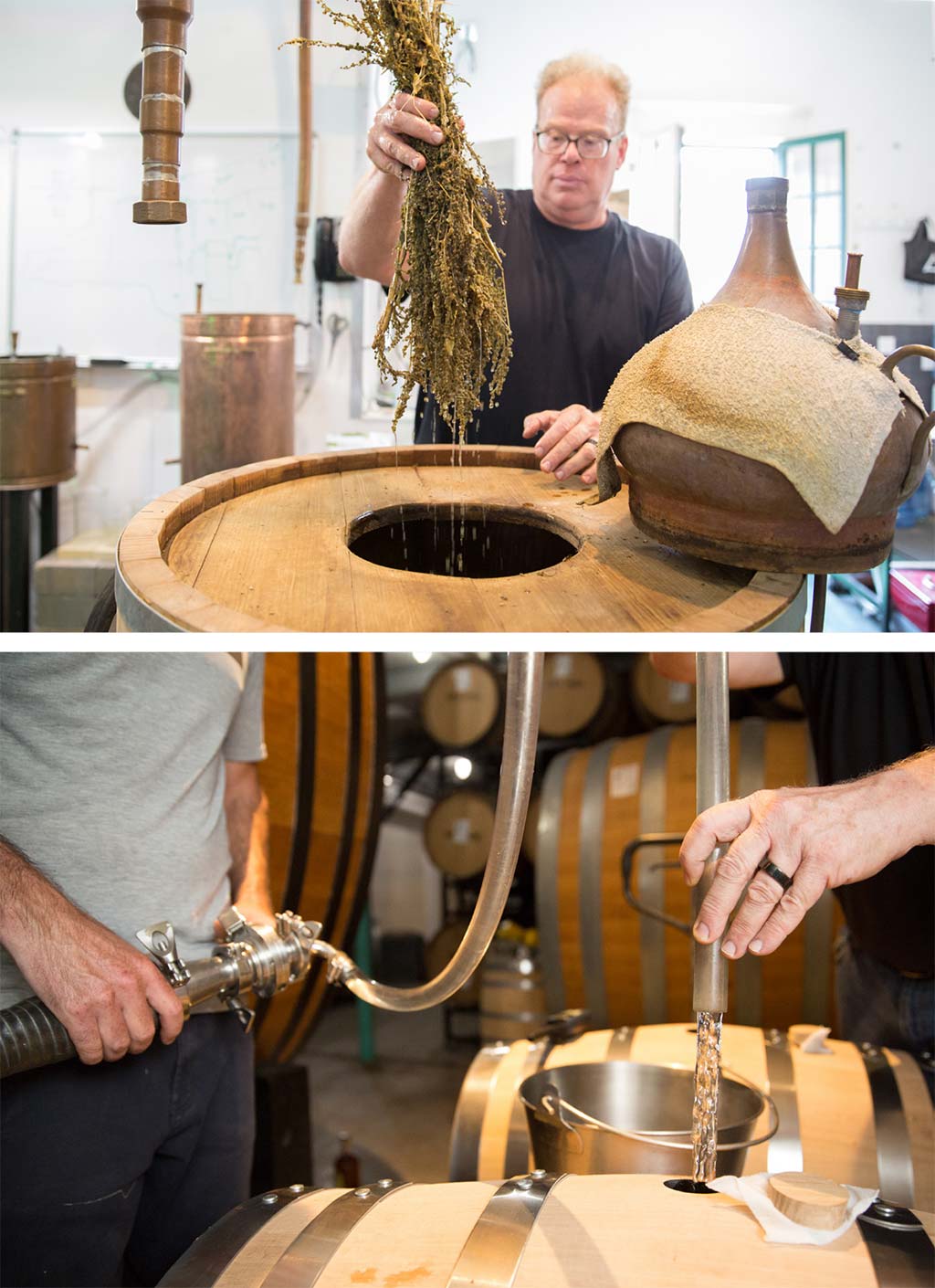 Classic distillery creations include Incognito Brandy, Absinthe Prelude, and Southern Ulster Single Malt. “Our flexibility in creating small batches has gotten our absinthe an international reputation,” Wagner says. “It’s fascinating to learn about; absinthe has this racy reputation, but it was actually first developed in Switzerland; it was a way to dose herbal medicine. And if you look at the ingredients, it’s got a lot of herbs in common with Ayurvedic chakra medicine—it was a way to calm your stomach and relax after dinner.”

She’s endlessly fascinated by the learning that comes with each interpretation of a classic. “We take traditions and improve on them by focusing on quality,” Wagner says. “And we’re also working with innovative liqueurs and potable bitters. The Fernet, a bitter mint, is flying off the shelves. And did you know, cherry brandy is a critical component in cheese fondue? We only found out when the chefs started showing up. And I never realized how many Eastern Europeans live here until we launched our Slivovitz—apparently it’s a tradition at every wedding.”

The discoveries just keep coming with no end in sight. “We just keep creating,” says Wagner. “We work with competition bartenders and ask them what they can’t find but wish they had. Steve got ahold of an 18th-century French recipe book and worked really hard to translate it and weed out any toxic or endangered ingredients; we discovered mastic that way.”

“We just add yeast and wait,”
says Wagner.
“No sulfites or other chemicals.” 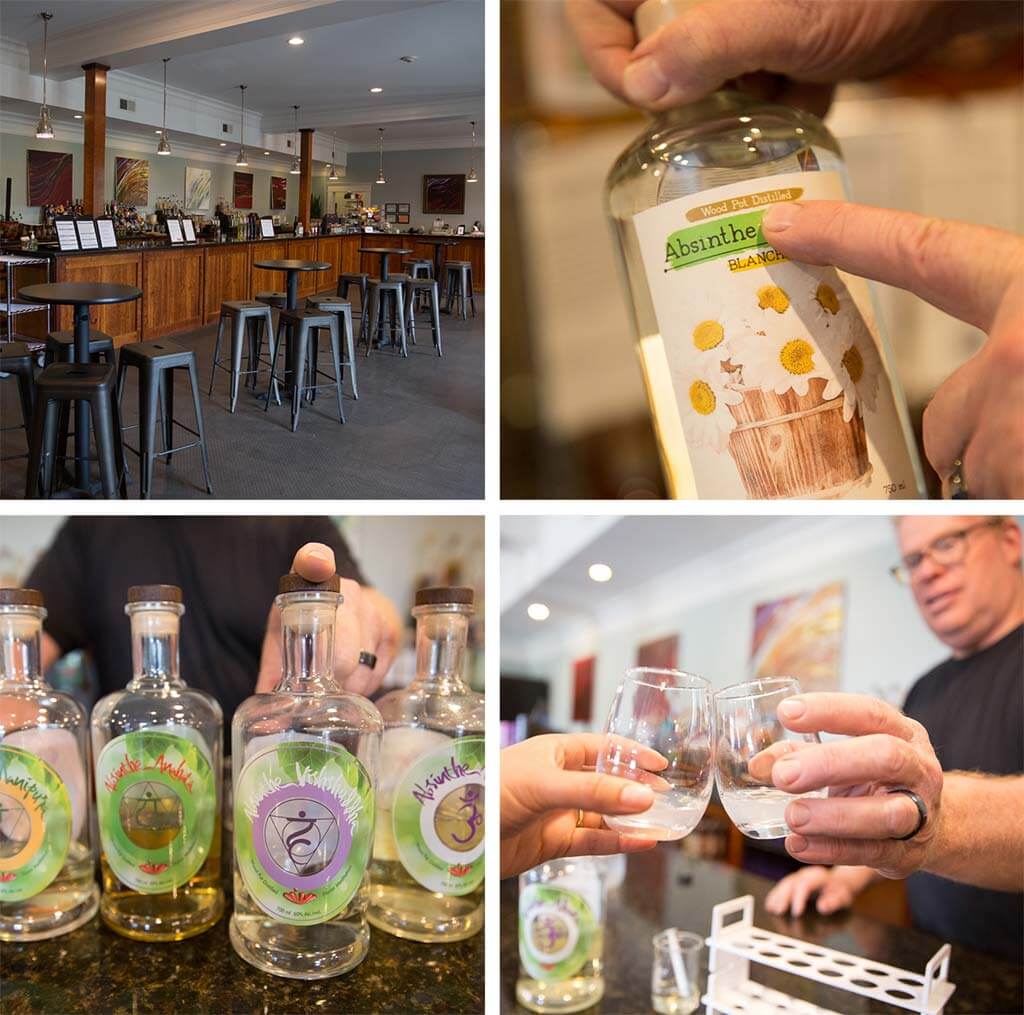 With over 70 products available, there’s loads to discover at Stoutridge. You’re welcome to stop by the tasting room whenever they’re open (Thursday through Sunday, 11 am-6 pm, and by appointment.) You can also make a reservation for a focused tasting with master vintner and distiller Osborn and get an in-depth education on your favorite bevvies—or find a new favorite. “You can schedule a private tasting based around wine, absinthe, mastic, or whiskey, whatever you want to focus on,” says Wagner. “We’ll spend an hour walking you through the whole process, and then you pick a fine product directly from the hands of the maker. And do stop by whenever you’re in the area; we’re open year-round, and there’s always something interesting to try.”