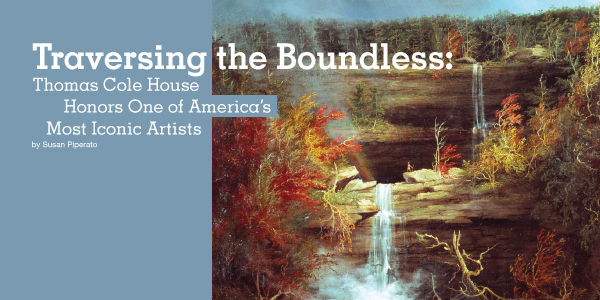 Friends of my heart, lovers of Nature’s works,
Let me transport you to those wild blue mountains
That rear their summits near the Hudson’s wave
Though not the loftiest that begirt the land,
They yet sublimely rise, and on their heights
Your souls may have a sweet foretaste of heaven,
And traverse wide the boundless.
–Thomas Cole, from “The Wild”

If any artist gave the Hudson Valley cultural legitimacy it was Thomas Cole (1801-48). His landscape paintings—the foundation for one of America’s most important and prolific artistic movements—inspired writers from Burroughs to Poe to Irving to Hemingway and landscape architects like Andrew Downing. And Cole’s work continues to draw visitors from around the world, both to explore Thomas Cole Mountain, the Catskills’ fourth-highest peak that was named in his honor, and to visit Cedar Grove, his 19th-century farmhouse and studio—now beautifully preserved as the Thomas Cole National Historic Site—in the Village of Catskill.

As founder and leader of the Hudson River School of Painting, Cole celebrated as well as bemoaned the fact that the Hudson Valley boasted exceptionally picturesque and dramatic mountains, cliffs, forests, waterways and valleys, and yet, unlike the great rivers of Europe, lacked ruins of great buildings left by people come and gone.

“The Rhine has its castled crags, its vine-clad hills, and ancient villages,” Cole wrote in “Essay on American Scenery” in 1836. “The Hudson has its wooded mountains, its rugged precipices, its green undulating shores—a natural majesty, and an unbounded capacity for improvement by art. Its shores are not besprinkled with venerated ruins, or the palaces of princes; but there are flourishing towns, and neat villas and the hand of taste has already been at work. Without any great stretch of the imagination we may anticipate the time when the ample waters shall reflect temple, and tower, and dome, in every variety of picturesqueness and magnificence.”

So while Cole devoted his artistic career to depicting the then-undeveloped Hudson Valley in a style that was as dreamlike as it was detailed and realistic, and as a place as romantic and welcoming as it was wild and undiscovered, he also made sure to imagine some castles for the Hudson River’s shores, and to include the mark of mankind—showing the viewer what the place could become.

Ultimately, however, and happily for generations of viewers since Cole’s time, he decided, as he wrote in “Essay on American Scenery,” that “American scenes are not destitute of historical and legendary associations—the great struggle for freedom has sanctified many a spot, and many a mountain, stream, and rock, has its legend, worthy of poet’s pen or the painter’s pencil.” 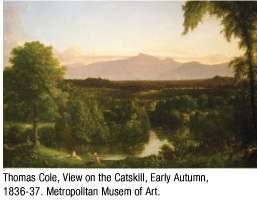 An Englishman born in Lancashire, Cole and his parents and sister made their way to America in 1818, settling in Steubenville, Ohio. There the teenage Cole met an itinerant portrait painter named Stein, from whom he learned the basics of oil painting. But Cole learned quickly that he was not a portrait painter, and developed an interest in landscape. He moved to Pittsburgh in 1823 and then to Philadelphia in 1824 to attend the Pennsylvania Academy of the Fine Arts, where he drew from casts.

Cole’s career took off when he rejoined his family in 1825 in New York City, where he sold five paintings to the successful merchant George W. Bruen, who financed a summer trip for Cole to the Hudson Valley. There, Cole worked prodigiously, producing five landscapes: two views of the village of Cold Spring and one of the ruins of Fort Putnam in the lower Hudson Valley, as well as views further north of the Catskill Mountain House and Kaaterskill Falls, the latter of which turned both Cole and the Falls into icons.

Back in New York City, Cole displayed the five landscapes in the window of William Coleman’s bookstore. The Two Views of Coldspring [sic] were purchased by Mr. A. Seton, who, in turn, loaned them to the American Academy of the Fine Arts annual exhibition in 1826. Cole’s works attracted the attention of well-established painters like John Trumbull, Asher B. Durand, and William Dunlap, and he was made a Fellow of the National Academy while still in his twenties.

Thanks to the affluent Trumbull, who sought out Cole and bought one of his paintings, Cole was put into contact with several wealthy New Yorkers, including Robert Gilmor of Baltimore and Daniel Wadsworth of Hartford, who became patrons. And so the Hudson River School of Painting was born. Cole’s influence can be best seen in the works of Asher B. Durand, who became Cole’s lifelong friend, as well as those of Frederic Edwin Church, who studied with him from 1844 to 1846, and whose Olana estate still stands in Columbia County, across the Hudson from the Cole homestead, which is also open to the public.

Cole returned to England to study, visit relatives, and attend to family business matters from 1829 to 1831. Because of the many wealthy Americans traveling abroad that Cole met, and the several commissions he received, some historians consider this his happiest and most productive years. Upon his return to New York City in November 1832, he mounted an exhibition of his European paintings, which also caused a stir. Soon afterward, he returned to the Hudson Valley and began keeping a studio just outside the town of Catskill at a farm called Cedar Grove, where a significant portion of his body of work was completed. While working at Cedar Grove, Cole established a friendship with Coxsackie native Luman Reed, a successful local merchant who also owned a private art gallery in New York City and became Cole’s patron.

In 1836, both Reed’s and Cole’s fathers died, but that year was to bring happiness too. Cole married Maria Bartow, a Catskill native and the niece of Cedar Grove’s owner, in Cedar Grove’s west parlor, and the couple was given a suite of rooms on the second floor of the house. Although Cole and his wife spent 1841 to 1842 abroad, he considered Cedar Grove his home, and had five children born there, the first in 1838. Also at Cedar Grove, Cole saw several of his letters and poems published in New York magazines and newspapers to stave off financial trouble; and Durand and another art student boarded for $3 a week and annual tuition of $300 per year from 1844 to 1846—after which Cole could afford to build his “New Studio.” He died at Cedar Grove on February 11, 1848 from an attack of pleurisy and congestion of the lungs, just 10 days after his 47th birthday. The funeral was held at nearby Saint Luke’s Episcopal Church, where Cole had converted in 1842. He is buried in the Thomson Street Cemetery.

Although Cole is best known as a landscape painter, he also painted allegorical works. The most famous of these are two series: the 1840 four-part “The Voyage of Life,” depicting childhood, youth, manhood, and old age (two versions of which are at the National Gallery in Washington, DC and the Munson-Williams-Proctor Arts Institute in Utica, NY), painted in Italy for patron Samuel Ward, a wealthy banker and philanthropist, for $5,000; and “The Course of Empire,” five paintings completed at Cedar Grove for Luman Reed between 1832 and 1836, depicting the same landscape over generations—from wilderness to foundation of empire to decline and then back toward desolation—in the collection of the New York Historical Society. It was during his work on “The Course of Empire” that Cole began expressing strong views against industrial development and its negative impact on the Catskills region—views that continue to influence Hudson Valley environmental advocacy organizations today.

Cole would undoubtedly be pleased to know that today his work continues to show viewers what places were in the past as well as what remains and why it’s worth preserving.

Cedar Grove, also known as the Thomas Cole House, was declared a National Historic Site in 1999. The site, located at 218 Spring Street in Catskill, near the western entrance to the Rip Van Winkle Bridge, is open from the first weekend in May through the last weekend in October. Tours of the Main House and Old Studio are run hourly on a first-come-first-served basis Thursday to Saturday, 10am to 4pm. (Tours are also available for groups and by appointment.) Each tour lasts approximately 50 minutes and is limited to 12 people. Tickets are $9 per person during regular hours, and $7 per person for seniors over 62 and students with ID.