The Little Railroad That Could 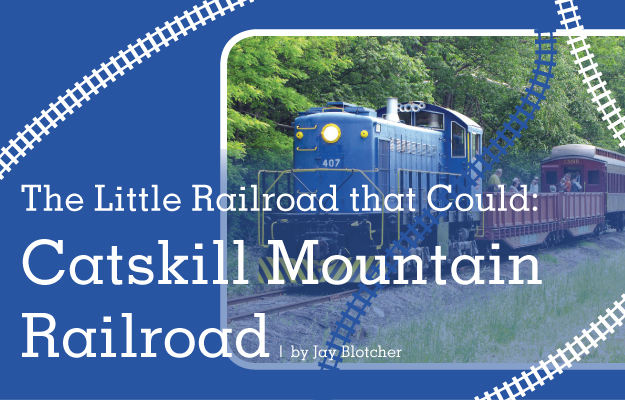 The crews of the Catskill Mountain Railroad (CMRR) have been working on the railroad all the live-long day. But not simply to pass the time away. CMRR is a group of volunteers dedicated to rebuilding the tracks of the Ulster & Delaware Railroad. It once ran elegant passenger trains between Ulster and Delaware counties, from Kingston to Oneonta.

Harry Jameson, chair of the CMRR, is unapologetically obsessed with his noble task. So is the legion of 130 volunteers who venture out in all types of Valley weather to work to bring the group steps closer to a fully functioning 38-mile railroad as it once ran in the 19th to 20th centuries.

Throughout the hours, days, months and years of toil the CMRR is now nearly three decades old.

“Our goal is to make Ulster County’s Tourist Railroad the polished gem it has the potential to be,” Jameson said.

Jameson was not train-crazy as a child. “I was not really a railroad buff,” he said. “I had a Lionel train set as a kid. But I originally got involved as a matter of business.”

The business was Jameson’s Town Tinker Tube enterprise, which he started in 1980 in Phoenicia. The first year, he rented 1,000 inner tubes to thrill-seekers who wanted to bob along on the currents of the Esopus Creek. That figure jumped the next year to 4,000. But there was one hitch to the experience.

“I was putting people in the river, but I had no means of getting them back afterward,” Jameson noted. That is to say, people would float downstream, but then have to hoof it back to the origin point or plan their trip with two vehicles. 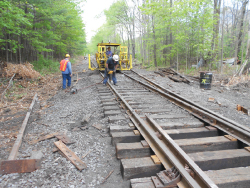 However, that all changed in 1982 when a Shokan realtor named Kent Reeves came along. He received a lease from Ulster County to build a little train—“amusement park ride size,” Jameson said—to bring tubers back upstream from Mt. Tremper. The new service was billed as “Tube Down, Train Up.”

At the end of a successful first season, Reeves decided to form a corporation. He asked Jameson and others to be stockholders. The savvy businessman did not hesitate. Within the year, CMRR was founded with a mission to bring the dormant railroad back to roaring life. By year two, Jameson became a director.

Jameson credits Earl Pardini, currently CMRR president, as “the person who has carried the torch” to invigorate this venture. Pardini, who worked for Conrail on the final train that ran on the Catskill Branch Line, was a major force in building CMRR. He sat on a committee that saw the potential for starting a tourist railroad on tracks last operated by Penn Central, which had allowed the infrastructure to fall into disrepair.

The vision of Pardini and his colleagues was to create a 1900s era Tourist Railroad. The Catskill Mountain Railroad Company Inc. was chartered as a for-profit railroad with the intention of operating a short line freight business out of Kingston to help fuel the funding for rebuilding the line. Unfortunately freight customers needing deliveries never materialized.

By 2002, CMRR streamlined its ambitions and encouraged Ulster County to apply for grants to facilitate a more manageable enterprise: restoring the railroad line from Kingston to Phoenicia. This stretch of track had a noble history; it was the connection between wealthy New Yorkers who had come up on Dayline steamers to Kingston and the grand hotels like the Catskill Mountain House that flourished in the Northern Catskills from the 1870s through the early decades of the 20th century, peaking in 1917 before decades of steady decline as tourists found more exotic holiday locales.

Grant applications, as well as red tape on the state and federal levels had to be navigated to begin the project in earnest. Locals met the proposal to lease the tracks enthusiastically, as the revitalized railroad was poised to bring tourists and income back to an area laid low by IBM’s departure. A 1978 feasibility study determined that a refurbished railroad in Kingston could accommodate 250,000 to 300,000 people annually.

The promise was to create two-hour round trips in which trains, running on Class 1 track, would attain leisurely speeds of 15 miles per hour. Such a pace, Jameson points out, maximizes sightseeing enjoyment of the flora and fauna of the Mid-Hudson Valley. 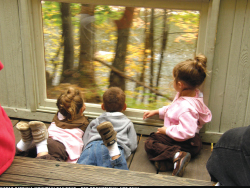 “Blue herons in the creek, eagles diving for a trout dinner—that is the experience that people come along for,” Jameson said. “Catskill Mountain Railroad provides the greatest visibility of the Catskills.”

CMRR strives for optimum historic authenticity in creating a railroad experience for adult and children alike. Old trains are restored inside and out by volunteers who, cannily self-trained in this area, consult old books, etchings, photos and manuals to attain near-perfection.“We have an amazing spectrum of talent,” Jameson said of CMRR volunteers, “people involved in railroads, carpenters, welders, painters and woodworkers.” Some actually were railroad workers in their youth, once serving as brakemen, conductors, engineers and bridge workers. 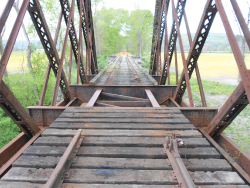 “It’s amazing that the railroad was reclaimed foot by foot from the tangle of underbrush by a workforce of men, all volunteers, and some of them over 65 and long retired—including two guys in their 80s,” said CMRR volunteer John Voelcker, a two-decade weekender in West Saugerties.

“I always feel like I’ve had a complete workout after a day of working with these guys,” Voelcker added. “I’m young and these guys are old, and they spend a day cutting up downed trees.”

But the labor is well worth the reward, he said. “You get the physical reward of seeing the results of a day’s work. And you’re helping to restore something; you get to be a part of history.”

While the core group lives between Albany to Westchester, CMRR volunteers hail from New Jersey, New Hampshire and even Virginia, eager to share the singular satisfaction of bringing an old train back to life.

Dedicated and energetic teams restored two 1917 Erie-Lackawanna passenger cars that run on the tracks. (The first car was refurnished over a period of five years at a cost of $18,000 in materials and thousands of hours of donated labor.)

Those who lack particular experience in restoring cars are welcome to do the equally crucial work on the railroad infrastructure: Replacing railroad ties and cutting brush and fallen trees that have engulfed the tracks.

“It is hard, gut-wrenching work,” Jameson said. Tropical Storm Irene was especially harsh on the railroad last August, flooding tracks, washing away track beds and destroying overpasses in the western part of Ulster County. But as the waters receded, determined volunteers moved in to repair the formidable damage.

“People come in and they see what we do and they want to be part of it,” he said. “I’ve had people who have never ever done anything with railroads, have become conductors and engineers.”

Jameson recalls an incident a few years ago, as the CMRR track crew was in Kingston, restoring a track by the Elmendorf Overpass. A man and his 16-year-old boy watched the process and finally asked what the heck was going on. Jameson explained and the father and son signed on as volunteers.

“This kid is now one of our locomotive engineers,” he said. “That’s even a bigger picture for us, creating the next generation of Railroaders.” 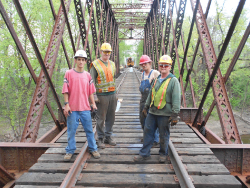 Currently, CMRR can boast several train rides. They include The Esopus Creek Scenic Train out of Mt. Tremper, which offers, at present, a 5-mile roundtrip along the Esopus with the beauty of the Catskill Mountains as a backdrop. The Scenic Train also schedules two Twilight Limited Train rides, one in July and August, offering a nighttime ride under the starlit sky. When the leaves turn their brilliant colors Fall Foliage trains provide a spectacular autumn experience one cannot receive from a car window. Prior to Irene the CMRR Scenic Trains traveled to Phoenicia where people would visit the Empire State Railway Museum. The ESRM exhibits the history of Catskill Mountain Railroading; although temporarily disconnected, it’s still open to visitors by car.

The Kingston City Shuttle began operation in 2008 after two years of track restoration. The Shuttle Special Event trains operate every Saturday throughout the summer. Decorated Halloween Trains provide a non-spooky children’s ride. Every Christmas season, the CMRR Winter Holiday Train attracts happy children and parents to chug along with Santa. There are rides on both ends where musicians serenade passengers. Last year, in total, CMRR trains “hauled” 12,000 passengers.

“The goal, one day for the CMRR, is [that] people drive up the Thruway, park in Kingston, and get on the train to go all the way to Phoenicia with stops along the way for hiking and picnics,” said John Voelcker.

The work continues; CMRR just purchased a 1946 S-1 locomotive from the Staten Island Railroad for the Scenic Train. A future goal is a train that starts from Kingston and travels to the Ashokan Reservoir and points west. But clean-ups and repairs dominate efforts. A major project is the rehabilitation of the 400-foot bridge over the Lower Esopus West of Washington Avenue in Kingston. Earlier engineering estimates put a price tag of $850,000 on the repair. With all of the bridge timbers donated, and the CMRR’s time and talent, Earl Pardini’s crew is halfway through the task—doing it in-house for approximately $30,000.

“This is the story of the little railroad that could,” Pardini said, “because we do.”