by text and photos by becky nesel

Take a trip back in time through the millions of years of history recorded in the rocks. 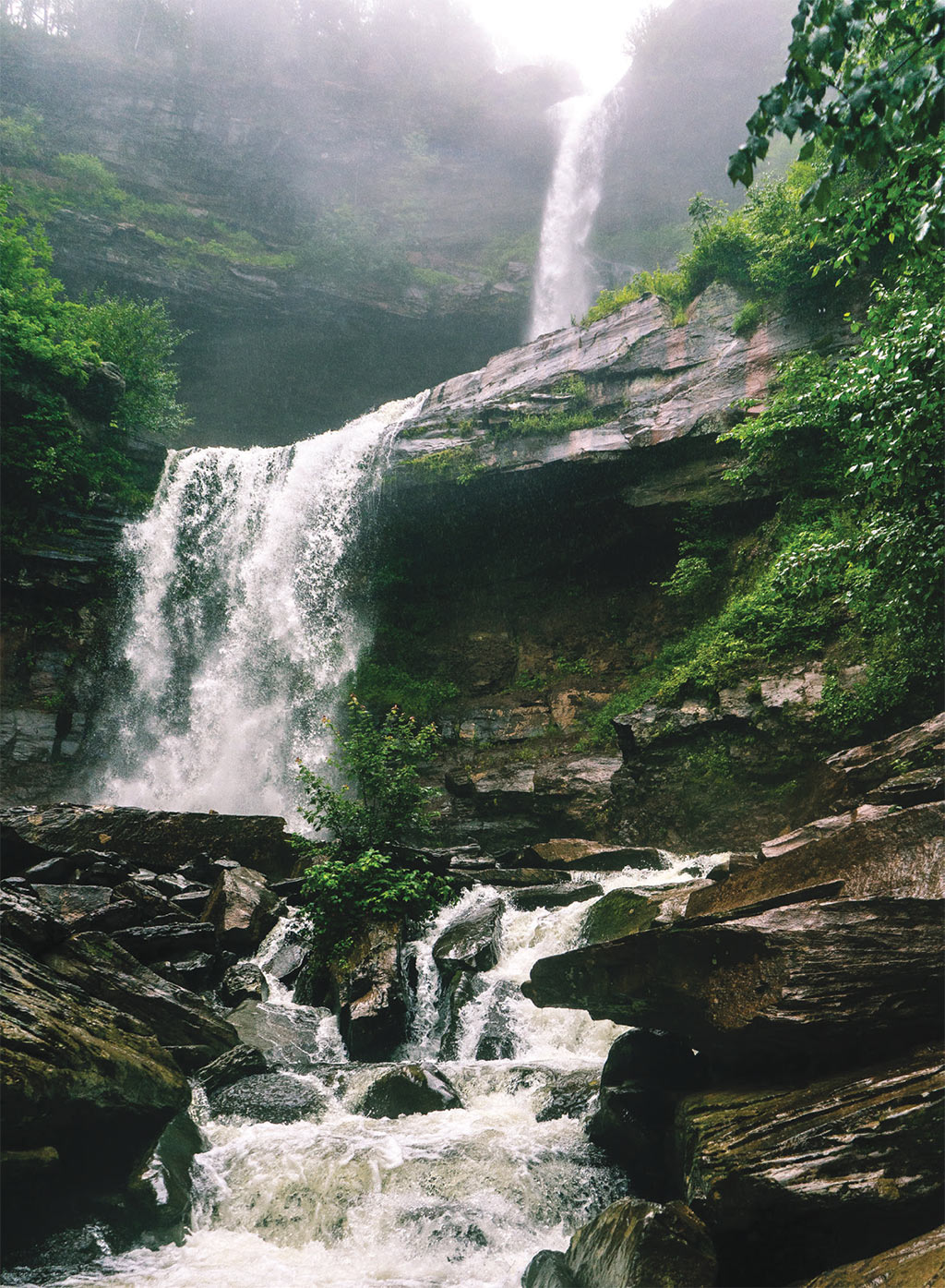 It’s no secret that the Hudson Valley has an abundance of beautiful outdoor places, but did you know that its rich geologic history is what made them? This summer, take a trip back in time through the millions of years of history recorded in the rocks—from mountain-building events, the split-up of the Pangea supercontinent and formation of the Atlantic Ocean, to the more recent event of an ice sheet covering a large part of North America until only about 10,000 years ago (that’s basically seconds in geologic time). Next time you’re spending the day in one of these towns, check out some of the spots nearby that give us a glimpse into the past. 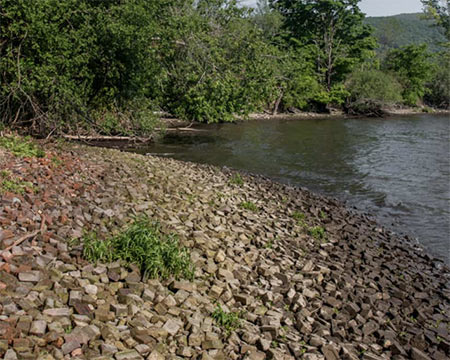 Walk out onto the peninsula where you’ll find fragments of red brick, tiny ghosts of a thriving brickmaking industry here in the Hudson Valley. Dennings Point BrickWorks at its height produced up to 400,000 bricks a day in the late 1800s to supply bricks mostly for buildings in New York City. The clay used in the Dennings Point bricks, as well as at many other brickyards along the Hudson, came mostly from clay deposits left by glacial lakes that are no longer here. These lakes existed as the Laurentide Ice Sheet retreated (melted) back north about 10,000 years ago, leaving meltwater and sediment in basins previously carved by the ice. 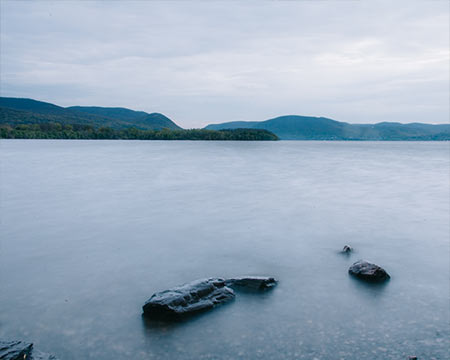 Spend time walking along, kayaking in, or relaxing on the shores of the Hudson River, formed during the Ice Age when a continental ice sheet carved a channel into the land. This same channel was then bombarded and further carved by catastrophic floods as the glaciers melted and left New York about 10,000 years ago. During the most recent glaciation the lands were covered in thousands of feet of ice. That ice is what sculpted these peaks and valleys into what we see today. 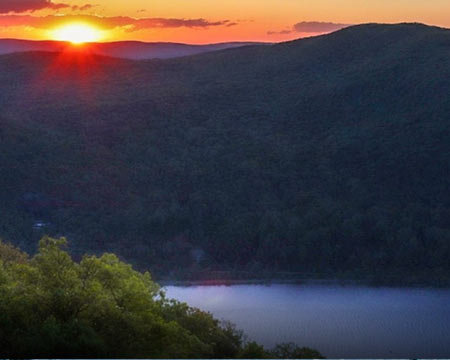 Take a hike up this mountain to be greeted by the view of the Hudson River and surrounding mountains at the top. You are in the Hudson Highlands, and the rocks you are standing on are a little over one billion years old. Most of the rocks you’ll see here are a metamorphic rock called gneiss. That means they started out long ago as something completely different, like sandstone, limestone, or granite. These rocks have seen the forming and breaking up of multiple supercontinents which left them folded, faulted, and morphed into new versions of themselves multiple times over. 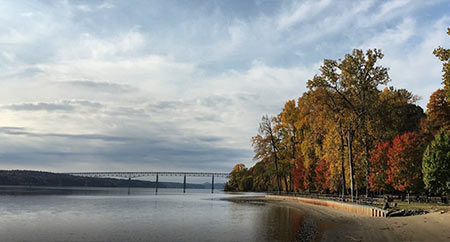 Walk long the shores of the Hudson, and at one point you’ll walk along a babbling brook and past a small waterfall flowing over bedrock exposures. The rocks here are part of the Austin Glen formation, a rock formation that formed about 465 million years ago in a deep ocean. There was a micro-continent that was creeping its way towards the main continent of ancient North America, and finer particles of sediment—like sand, silt, and clay—eroded off it and settled at the bottom of a deep ocean. There would be underwater avalanches that carried coarser sediment like sand into the ocean, where it was deposited between those finer layers. All the sediment eventually compacted into layers of shale (the mud) and greywacke (the sands). Later, that mini-continent crashed into ancient North America, and these rocks were thrust to the surface.You can also see lots of fractures and folds within the rocks that formed during this collision. 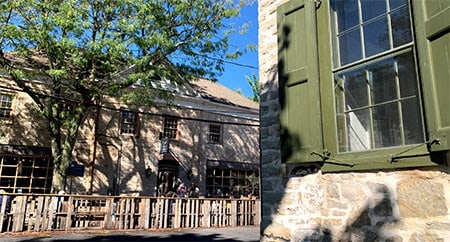 Uptown Kingston has the only intersection in the U.S. where there are pre-Revolutionary War buildings still standing on all four corners. The stones used in these buildings are much older—quarried from the local limestone deposits, originally formed as sediments were deposited in a shallow tropical sea, roughly 400 million years ago. When you visit this part of the city, you’ll notice the sidewalks aren’t concrete, but mostly slabs of bluestone. Bluestone is a type of sandstone that has a—you guessed it—bluish green color and is split relatively easily into “slices” along the bedding planes. Depending on the rock formation from which they were quarried, these rocks formed first as sediment deposited in shallow or deep oceans, or sometimes rivers, during the Late Devonian period (375-360 million years ago). 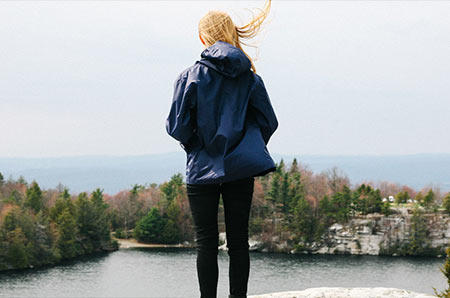 Any trail you decide to take at Minnewaska State Park will be not only gorgeous, but abundant in rocks—a geology enthusiast’s dream!. These bright white cliffs are the Shawangunk Conglomerate/Sandstone, a type of sedimentary rock. They are made up almost exclusively of quartz left behind after rivers deposited large amounts of sand in thick layers about 430 million years ago into a shallow sea. Eventually, these layers were compacted and lithified into a rock so strong that it resists many types of erosion, giving us these dramatic cliffs that so many of us love to climb and hike. The Shawangunks are also a great place to look at evidence of North America’s most recent glaciation that ended about 10,000 years ago. On many of the rocks atop the cliffs at Lake Minnewaska, if you look down you’ll notice thin parallel lines all running in the same direction. These are glacial striations left as the ice moved and scraped rocks and sediment against the bedrock. You’ll also see boulders in many locations that look like they just don’t “belong.” These are called glacial erratics, dragged there by glaciers. 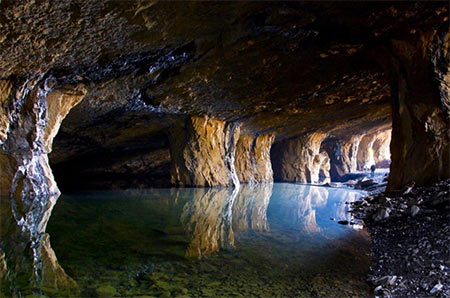 This is no natural cave! It was man-made in the mid-1800s when the dolostone (altered limestone) rock formation was used as Rosendale “natural cement.” The cement made from this rock was used in the Brooklyn Bridge, Washington Monument, parts of Grand Central Terminal, and more. That time is long gone, and you can now visit and walk inside the old mine. It is now used as a performance space and has been used as a mushroom farm, among other things. The ceilings are slanted at an angle because the rock was quarried along the natural areas of weakness present in the rock between the strata, in a process called room and pillar mining. These rocks formed from 450 to 375 million years ago in a shallow sea. 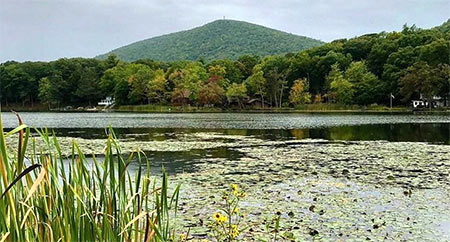 You can actually see the tower at the top of this 1500-foot-high mountain from the center of town. Eleanora Bliss Knopf, one of the United States’ first woman geologists, studied the rocks here. Stissing Mountain seems to “pop up” out of the landscape, and that’s because that’s kind of what it did, geologically speaking! This is a little “sliver” of the 1.1-billion-year-old metamorphic rock called gneiss that was pushed up to the surface during a mountain-building event called an orogeny. Other rocks were pushed up with it but were mostly eroded away because they are weaker than the hard gneiss. This is a fairly short but strenuous family-friendly hike with a fire tower at the top and a great view of the surrounding area. 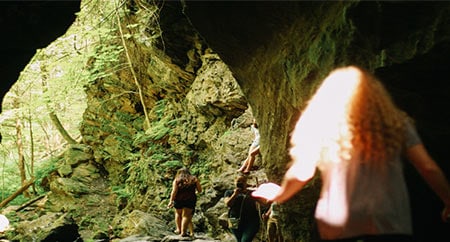 This roughly one-mile round trip hike leads you to a waterfall—inside a cave. Other trail options can bring you on a relatively short hike, one that leads to a view at the top of a small mountain, and brings you past several lichen-covered glacial erratics. In the exposed bedrock near and in the cave, as well as loosely in the streambed, you’ll see tiny shimmering flecks that resemble glitter. These are mica minerals, a major component of the rocks here. You’ll also see little, dark, angular lumps in the rocks here if you look closely—these are garnet! The rocks here are a metamorphic rock called schist that formed about 500 million years ago when a micro-continent collided with ancient North America. The cave and waterfall itself formed towards the end of the last Ice Age, when tons of meltwater was rushing off the retreating ice sheet, carving a gorge into the bedrock. 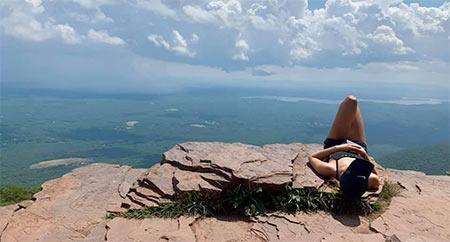 Just a short drive outside of Woodstock, Overlook Mountain is a part of the Catskill Mountains, which are not “real” mountains in the typical geologic sense, but a dissected plateau. Sands, muds, and other sediments were deposited here about 350 million years ago, beginning as many river deltas, and eventually compacted into rock: sandstone, siltstone, shale, conglomerate, and some limestone. They even preserved fossils in many of the layers, representing an abundance of lifeforms from the Devonian Period. This steep but quick hike rewards hikers at the top with a stunning view of the surrounding mountains, as well as the remains of an abandoned hotel and a fire tower to climb if you want even more of a workout (and view). When you find yourself at the top, take a moment and try to absorb the fact that this very spot was covered with thousands of feet of ice not even 15,000 years ago. This ice, along with more recent rivers, is responsible for the sculpting of these peaks and valleys you enjoy. 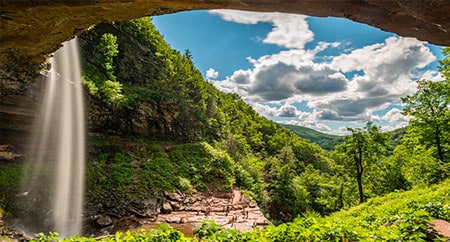 Kaaterskill Falls is a breathtakingly beautiful two-tier waterfall in the Catskills. It may be no surprise by now that this is yet another lucky feature left behind after the last retreat of the Laurentide Ice Sheet. Park at the upper trailhead near North Lake for a beginner-friendly walk that leads to an overlook platform where you can marvel in the natural beauty. Geologists love waterfalls for a couple reasons. The obvious reason is that they are fun to look at. And the erosional action of the water helps expose the rocks so that we can see them better and read the stories written in them from millions of years ago, when this land was unrecognizable when compared with its current state. We can thank the more resistant rock, sandstone, for the two ledges that jut out and give us the two tiers of cascading water. You may notice that there’s a red tint to many of the rocks here, notably the shales. This is due to the presence of iron oxide; it tells geologists that the muds that made these rocks were deposited in a terrestrial (land, not ocean) environment—likely a warm, tropical one. 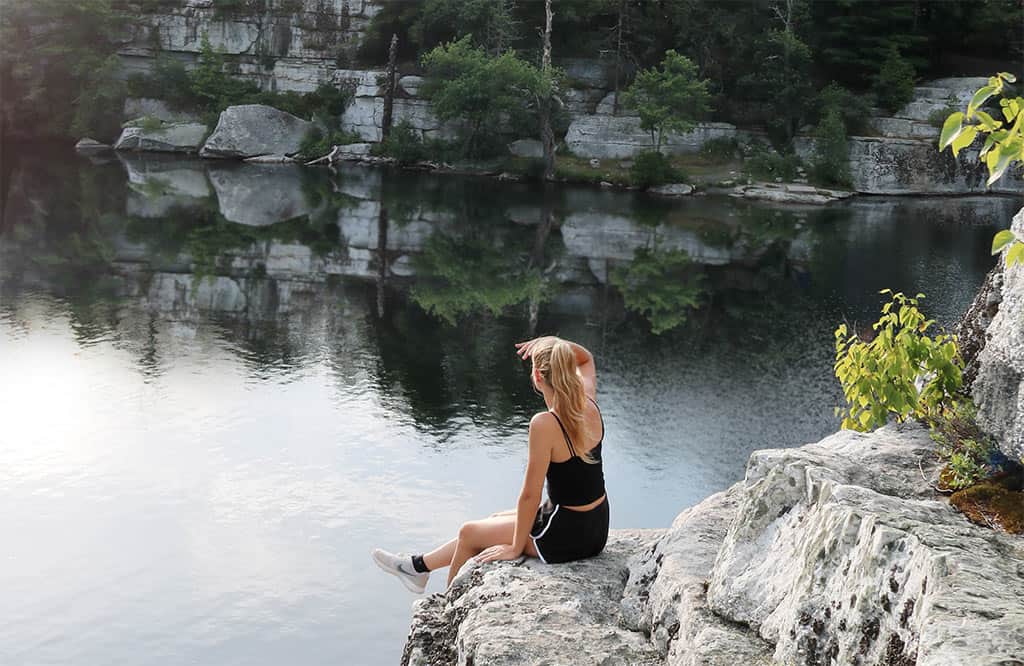 Thanks for tagging along on this small, time-traveling journey through our region’s geology! Remember to always follow Leave No Trace principles when hiking or walking in any outdoor place and be respectful of the plants and other living things (including humans) you encounter along the way.

Yes, there is a Santa