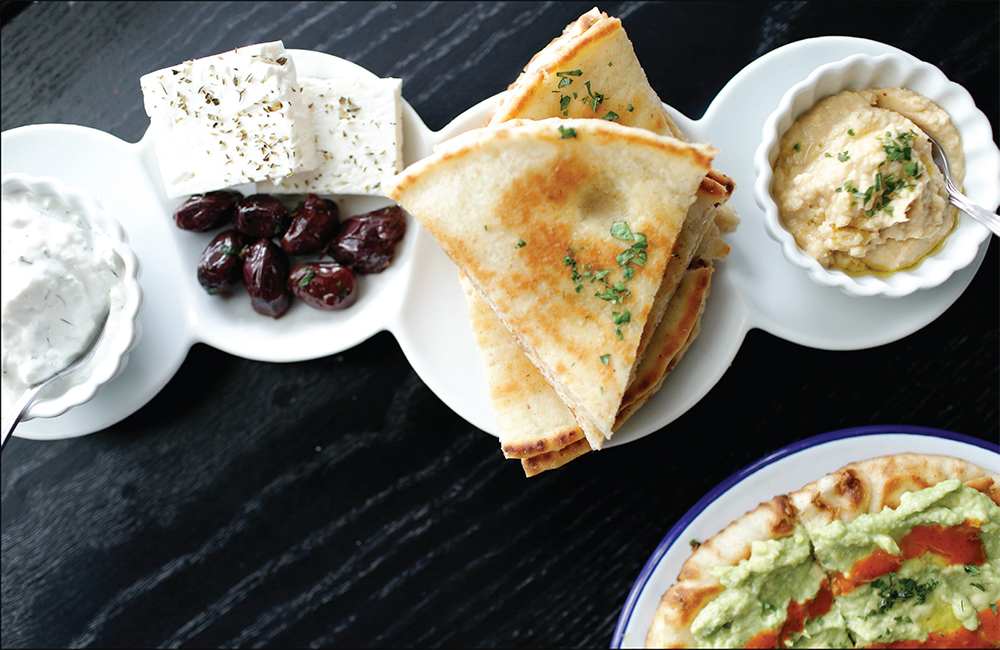 Inspired by her heritage, restaurateur and chef Maria Philippis launched Kovo Rotisserie, a casual, trendy Greek-inspired eatery, in mid-2016. Kovo would quickly become a mainstay in downtown Kingston, offering locals a taste of high-quality, modern Greek cuisine in a hip, clean space. It’s the perfect marriage of Maria’s ancestral homeland of the Greek island of Samos and her own

home, New York’s bountiful Hudson Valley. “My grandparents owned a general store on the island of Samos,” Maria says. “Customers would visit for their cooking supplies: salt, olive oil, cheese, bread, snacks. It was there that I learned about food, in my grandmother’s kitchen with my mother and aunts teaching me how to use the special ingredients of our ancestors.” 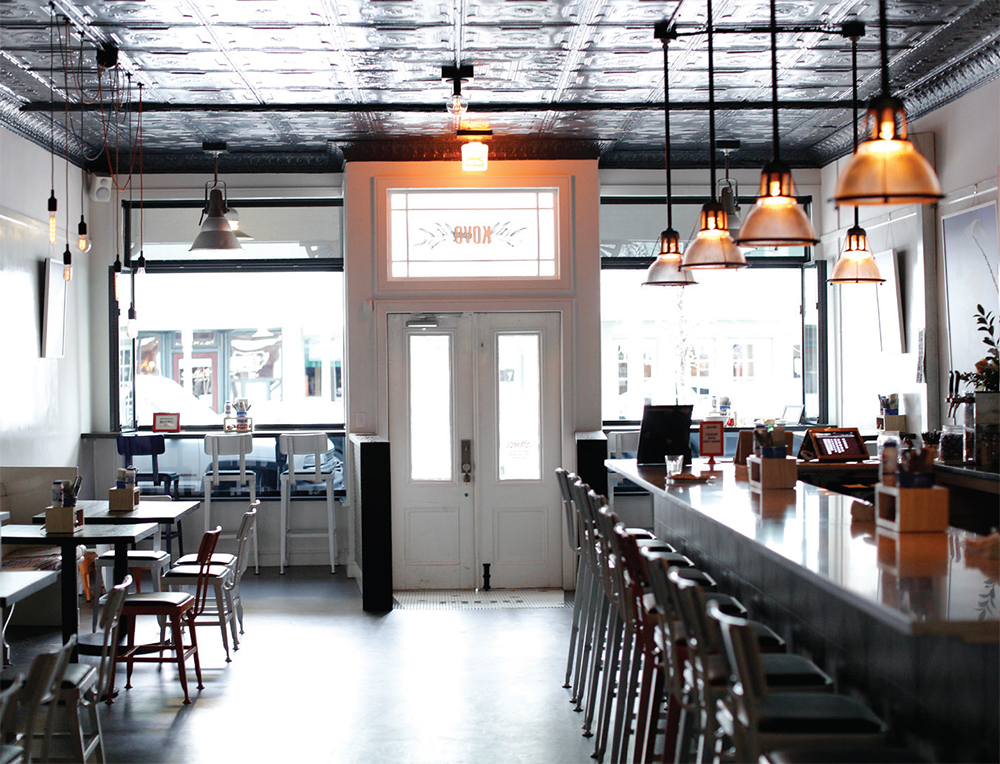 It’s the perfect marriage of Maria’s ancestral homeland of the Greek island of Samos and her own home, New York’s bountiful Hudson Valley.

An experienced restaurateur, Maria also owns and operates Boitson's Restaurant in Kingston, an American bistro serving refined comfort food alongside a raw bar and top-notch cocktails. Since its grand opening in June 2010, Boitson’s continues to wow locals and out-of-towners alike. Kovo is Maria’s second proprietary venture in the restaurant business; since she already owned the property where Kovo is located, it made sense for her to expand her reach and dabble in the casual, more family-friendly style of dining. She renovated Kovo’s location, transforming the space into

an airy, chic dining area suitable for any crowd. With two successful businesses under her belt, it’s safe to say that Maria knows her stuff. She has done something truly remarkable at Kovo: she’s breathed life and love into a foreign cuisine, while keeping the focus on fresh ingredients sourced close to home. Of course, the star of the show at Kovo is their meat; hence, the “rotisserie” in the name. Touting high-quality meats, all cooked on an in-house rotisserie, Maria promises her patrons the very best of regional dining through a unique

and affordable menu that allows customers to choose from a list of proteins, greens with traditional Greek seasonings, and the option to eat it in a pita or salad bowl. Hungry omnivores can try Greek-inspired dishes like leg of lamb, loukaniko sausage, or free-range chicken, all topped with spices and Greek staples like feta cheese imported from Greece.

For seafood lovers, Kovo also offers fish specials on their weekly Fish Fridays (check Kovo’s playful Instagram account for a chalkboard-sketch reminder each week!). Vegetarians or vegans looking to dabble in Greek fare shouldn’t fret; all of the fresh, seasonal salads at Kovo are fit for vegetarians, Maria says, and many of the side dishes available are vegetarian-and vegan-friendly.

[Maria] has done something truly remarkable at Kovo: she’s breathed life and love into a foreign cuisine, while keeping the focus on fresh ingredients sourced close to home.

“All of our salads are vegetarian, gluten-free, and can be made vegan,” Maria says. Don’t be fooled by what seems like a simple menu: the quality of the dishes served at Kovo speaks for itself. With glossy magazines like Vogue covering Kovo’s splash onto Kingston’s dining scene, the Mediterranean-inspired eatery continues to impress and expand its reach. Kids, too, are more than welcome to experience Maria’s take on Greek cuisine. Kovo has its own kids menu, complete with a bento-box-inspired lunch deal for guests ages 12 and under. The kids menu is inspired by Maria’s son’s favorite dishes, she says—another homage to family that makes Kovo feel like a home away from home. 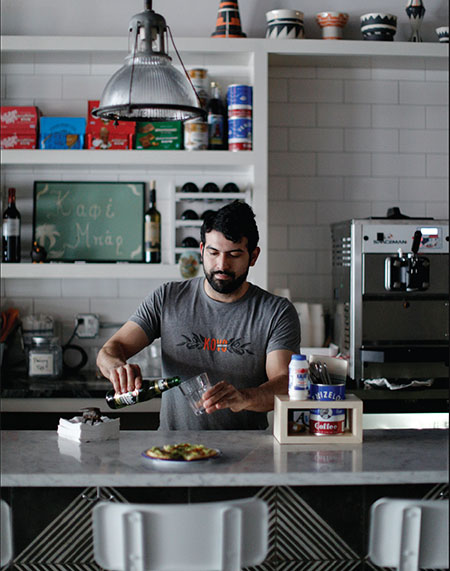 Of course, no foodie can forget dessert. Don’t overlook Kovo’s Greek yogurt; it has the perfect level of sweetness to balance out a hearty, savory meat. Then again, if savory is what you’re looking for, Maria’s salt, olive oil, and toasted almond-topped frozen yogurt dish is right up your alley.

Kovo also offers Saturday and Sunday brunch, featuring sweet delights like Greek yogurt pancakes or savory bites like Greek breakfast “tacos.” With 48 hours notice, the fabulous team at Kovo can even cater your next big event, bringing Maria’s expert touch and locally sourced ingredients to your home or office.

Kovo’s diversity and inclusivity—of locals and tourists, omnivores and vegans, adults and children alike—is a testament to Maria’s wisdom as a restaurateur. Here, there’s truly something for everyone. 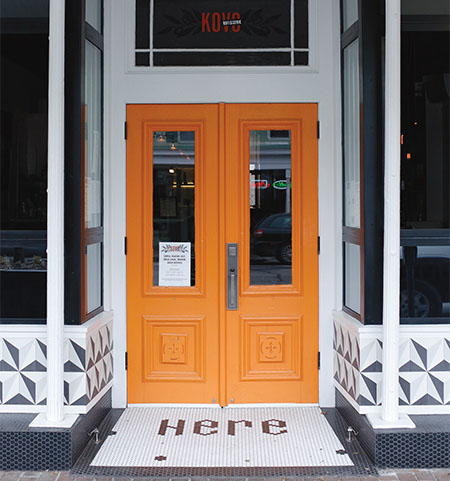