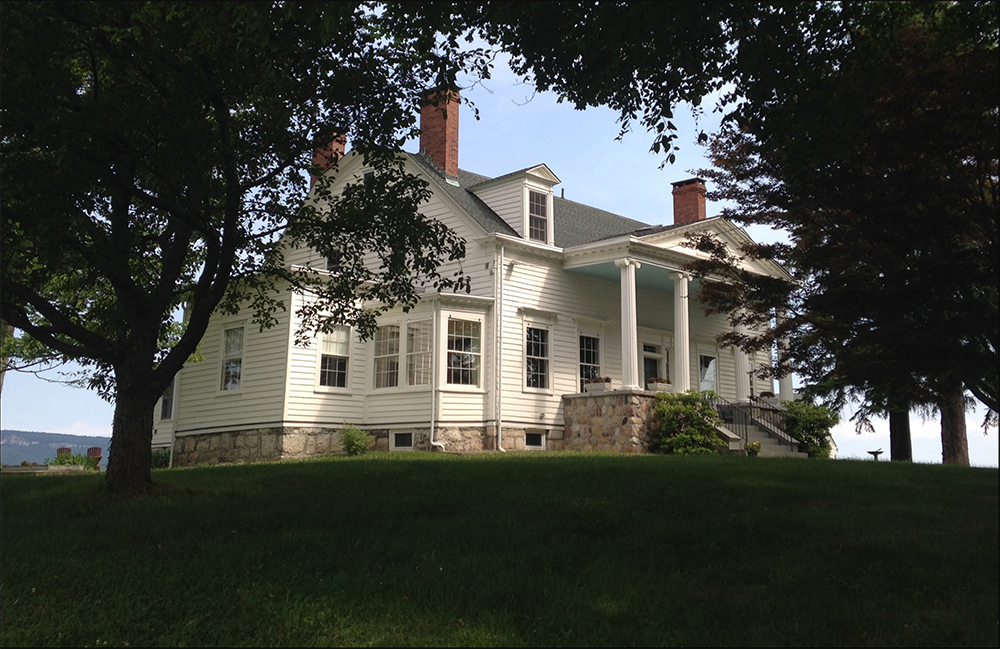 From the time Michael Aiello grew up in a circa-1830 Dutch Colonial in the shadow of the impressive Shawangunk Mountains, he knew what it meant to host an endless array of guests.

Frequently, members of his extended family who lived in New York City would travel to the house Michael’s grandfather purchased in the early part of the 20th century. The family would celebrate major life events, holidays—really any excuse to gather in this beautiful house.

Today, Michael owns the house with his husband, Robert Witkowski. The couple has turned Michael’s boyhood home into The Inn at Kettleboro, a quintessential weekend retreat for visitors eager to shed the stress of city life and reclaim some serenity.

“When they come up on Friday, the vast majority of guests ... are just intense and anxious,” says Robert.

“And when you see them the next morning at breakfast, they’re just different, relaxed people. It continues through the weekend.”

The Winesap and Braeburn rooms include mountain views and king beds and run $250–$275 per night. The Empire and Cortland are cozier with queen beds, and run $225–$250 per night.

The Inn at Kettleboro helps set the scene for a relaxing weekend in the Hudson Valley. Sitting on 13 acres atop a hill off Route 208 in New Paltz, the Inn offers panoramic views of the Shawangunk Mountains and Skytop Tower. 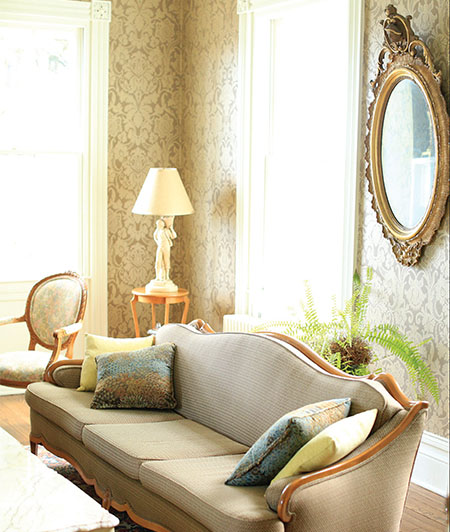 The Winesap and Braeburn rooms include mountain views and king beds and run $250–$275 per night. The Empire and Cortland are cozier with queen beds, and run $225–$250 per night. Each guest bedroom has its own private bathroom with showers and modern white subway tile walls.

Each guest bedroom has its own private bathroom with showers and modern white subway tile walls.

The decor is classic, combining a soft color palette of golds, blues, and reds with vintage chairs and dressers. Antique furniture tells unique stories, from the parlor furniture that once outfitted Michael’s grandmother’s house, to the dining room table, which was a Bard College cafeteria table found at a Habitat for Humanity ReStore. There is minimal drapery in the house to allow for natural light. The intention is to underscore soothing comfort while

Twenty years prior to creating the inn, Michael and Robert moved to New Paltz to take care of Michael’s parents—who lived in the house—while still commuting to their respective information technology jobs. After Michael’s parents passed away, and Robert left the IT field after 35 years, the couple decided to turn the family house into The Inn at Kettleboro. 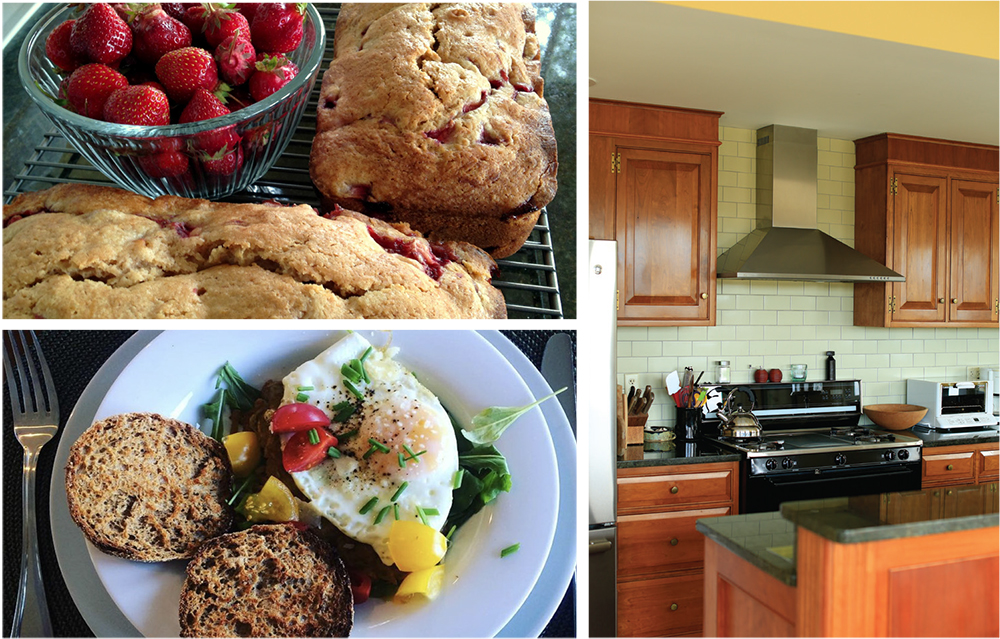 “It’s good to see the social interaction that happens during the sharing of the meal.”

Thus, a total renovation was in order before opening the inn Memorial Day weekend, 2014. They added six bathrooms and gutted the back of the house to emphasize the view, adding tall windows in the large dining room. That leads to the bluestone back porch, where Adirondack chairs face the Shawangunks and a picnic table hosts warm-weather meals.

Robert is chef at the inn, procuring his ingredients from the numerous local farms and preparing breakfasts like vegetable frittatas and orange-scented French toast. Fresh fruit, yogurt, granola and breakfast meats are always part of the family-style display. He’ll often bake for guests, setting onto the table impressive goodies like blood orange olive oil cake or cinnamon

scones. “I just gravitated to cooking,” says Robert. “I always loved to cook and entertain for people. We just thought it was a natural thing for us to do.” Just as natural is the communication with and between guests. Breakfast is served at 9am promptly, and guests are encouraged to sit together at the dining room table.

“Both of us feel it’s special that people get to interact with one another,” says Robert. “It’s good to see the social interaction that happens during the sharing of the meal.”

And when guests congregate with each other and staff, there’s ample opportunity to share knowledge of the region. Michael and Robert frequently lead guests to experiences that they’ll cherish for years.

Want a quick nosh and a good local drink? Robert may recommend Liquid Mercantile in Gardiner. Looking for a formidable hike? The Inn at Kettleboro often has guest passes from Mohonk Preserve.

Then there are the orchards. Not only are they popular destinations throughout the region, but The Inn at Kettleboro has its own peach and apple orchard on the property. Maintained by Dressel Farms of New Paltz, the eight acres adds to Robert’s kitchen pantry. “In the summertime the peaches are phenomenal,” he says. Guests can roam the orchard while visiting the inn.

The orchard also provides an idyllic setting for an Inn at Kettleboro wedding. The venue hosts about four to five intimate weddings per year, with guest lists typically ranging from 25 to 30 people. A winter wedding may focus on the parlor fireplace, highlighting the understated elegance of the home’s interior. In summer, the mountains once again become the star, as couples typically say their vows outdoors.

Whether it’s for a wedding, a weeklong vacation, a venue for special gathering or a weekend stay, visitors to The Inn at Kettleboro have sung its praises. Robert says reviews have been overwhelmingly positive.

“We’re very proud of that,” he says, “It’s nice to hear the words people share with the world about how much they enjoyed their stay here.” 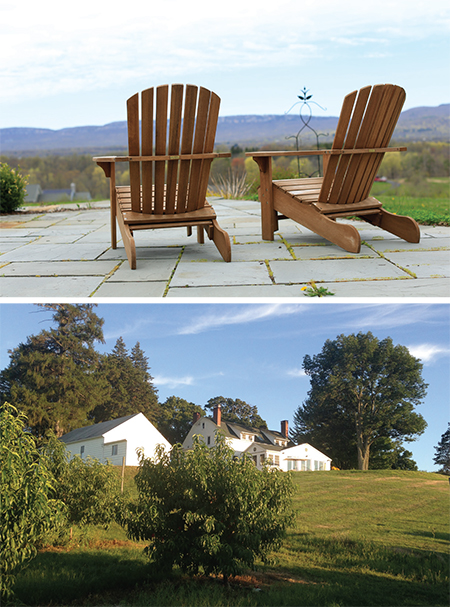