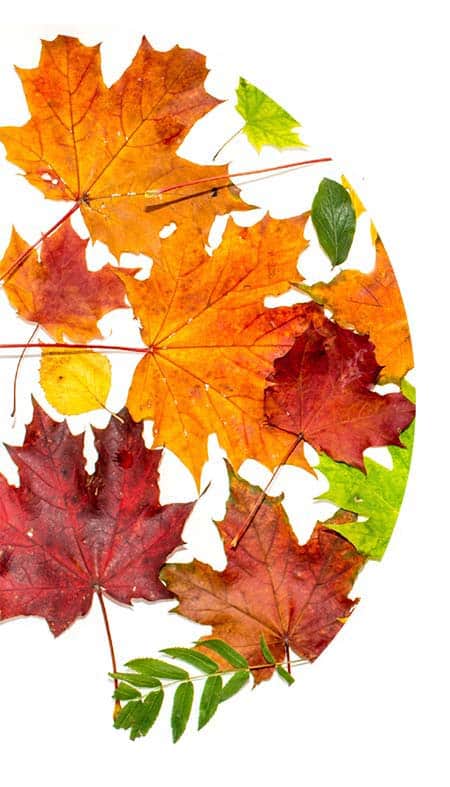 The colorful transformation of fall is a phenomenon that turns deciduous trees and shrubs in the Hudson Valley into a multiplicity of hues. As we marvel through the autumn months—leaf peeping at bucolic landscapes seemingly painted by famous Hudson River Valley artists of times past—we forget there’s something else going on that composes this glorious color-wash.

It’s a biochemical process at work in each leaf that occurs as the days grow shorter and the nights grow longer. It’s a simple breakdown of the chemicals within the leaves: chlorophyll, which gives us spring and summer greens; carotenoids that transform leaves into that shocking orange hue; xanthopyll, a member of the carotenoid chemical family that gives us the yellows of fall; anthocyanins that bring us the emoting purples and reds; and tannins that furnishes mahoganies and browns.

To lightly touch upon the basics of these chemicals, it’s the red pigments of the anthocyanins (only present in autumn) that protect the leaves from the sun. The photosynthesis process of chlorophyll starts to dissipate from the leaves during autumn’s onset, so the excess sugars produced by these anthocyanins and light combines to produce red pigment.

The carotenoids, which are present in the leaf cells during the entire growing season, are covered up during the overabundance of chlorophyll during summer. When the chlorophyll begins to disappear without extended sunlight it causing leaf veins to close. This cuts off the water supply and traps sugars. That’s why early on in fall you’ll notice some leaf veins turning red in a green leaf. This is the start of nature’s color show. Simply put—as chlorophyll ceases production the other colors make their reveal. 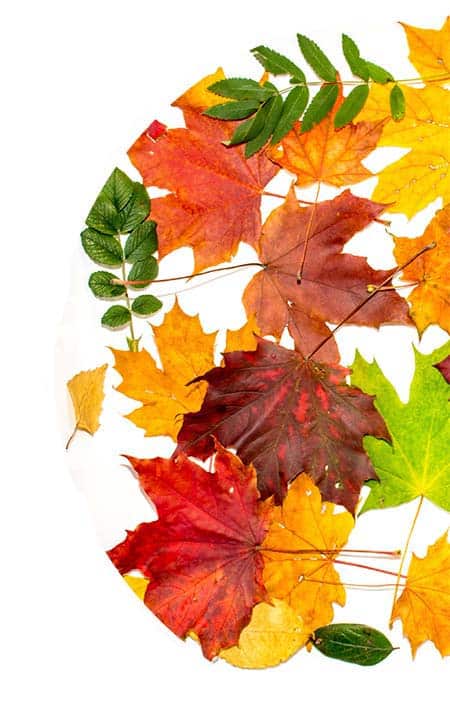 If both anthocyanins and carotenoids are contained in a species’ leaves during the lack of photosynthesis the fall leaves will be orange. When there’s less anthocyanin in this combination, the leaves will appear more yellow. And if neither of these pigments is present in a leaf, other plant chemicals such as tannins can affect the leaf’s color transformation. The varying intensities of each hue are a result of the chemical combinations and quantity in a tree’s leaves. While the golden glow of bronzes shines from Hickories are due to anthocyanin abundance and Flowering Dogwood’s purplish red come from a multi-chemical combo—the tannins in oak leaves are responsible for the oscillating browns to russets and the subtlety of the light tan Beech’s leaves that harmonize with the more dazzling hues.

With 150 different species of trees in New York, the Hudson Valley’s colorful fall display mostly comes from Mountain Ash, Paper Birch, Black Locust, Willows, fruit-bearing species such as Apple, Pear and Cherry, and many other varieties we’ve illustrated for your visual pleasure.

To add to the colorful diversity of autumn, particular species of trees have a characteristic fall color display. Maples are a bit diverse with the red maple turning brilliant scarlet, the sugar maple turning a bright orange-red, and a black maple glowing in vivid maize.

The timing of autumn’s color show varies by species because trees have their own schedule. For example, oaks start to show-off their colors long after other species have already shed their leaves.

And as much we try to explain it, really, it’s just pure magic.

How It's Made: Sheep to Shawl

HIKING WITH YOUR DOG