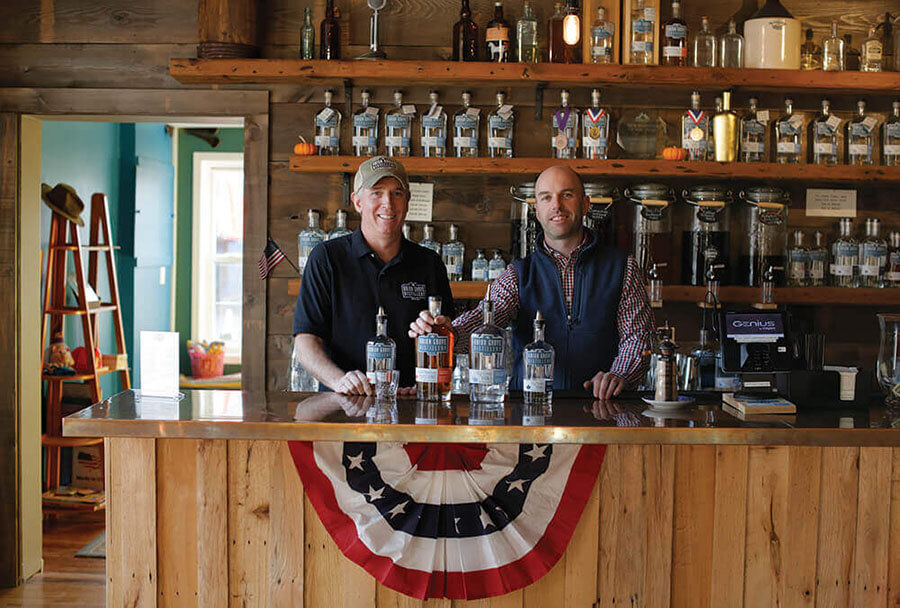 Bring a picnic and the kids, because the distillery has a separate kids’ space, plus a beautiful stone fireplace, a 100-year-old piano that’s perfectly playable, plenty of indoor seating, and an outdoor patio. 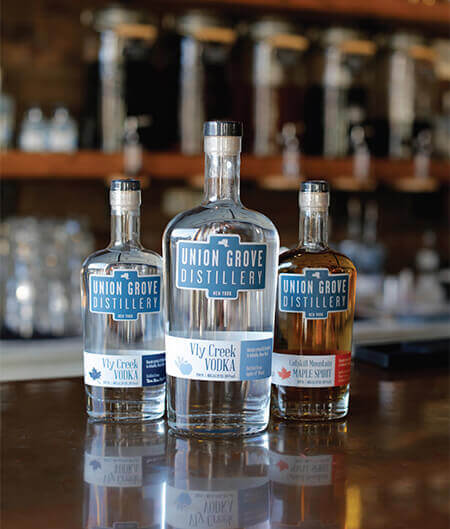 Up until about five years ago, Brian Mulder and Todd Pascarella had just barely dipped their toes into the craft beverage waters: Brian made some cider and wine on the side, and Todd dabbled in home brewing. But otherwise, the two friends were construction workers living in the Catskills with their families.

Eventually, they started talking about opening a distillery. The passing of the state’s farm distillery license made it easier for small craft spirit producers to establish and develop a business, while there was still plenty of space for new distillers in southeastern New York. Brian and Todd wrote up a business plan and started looking for locations while driving back and forth from ventilation jobs.

They found an old building on Route 28 in Arkville: originally built in 1920, it was a former roller rink turned public hall turned farm equipment servicer. The plumbing was shot and the structure was basically down to its shell, but if there was anything Brian and Todd knew, it was buildings. They renovated the space and prepared it for a February 2016 opening.

But here’s the thing: If there’s one thing Brian and Todd didn’t know, it was how to distill a spirit.

They’re forging new ground in the distilling scene while running a family-friendly tasting room at their Catskills production facility.

“Todd and I had never operated a still or ran a still or worked with a still in any capacity,” says Brian. “So we purchased a building and still and made our spirits. We really jumped in with both feet.” Union Grove Distillery opened February 10, 2016, and had cases of its first spirit, Vly Creek Vodka, ready for purchase. It sold. It sold again. It has won awards. Since then, Brian and Todd have produced a vodka made with aged maple syrup, as well as a maple spirit. They’re forging new ground in the distilling scene while running a family-friendly tasting room at their Catskills production facility.

There are a lot of people to thank for that, from family members to neighbors, but maybe we should start with the vodka. “We actually hit a home run out of the gate,” says Brian about Vly Creek, which is distilled from locally sourced apples and wheat and won Best of Category at the 2017 American Distilling Institute’s Annual Craft Distillers Conference. It’s produced in equipment from a Polish company called GENIO, which boasts a reduced-energy footprint and a more precise, modern method for distilling. 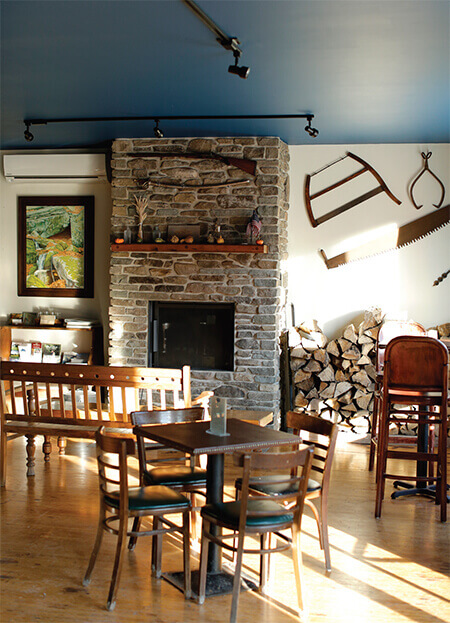 After using the equipment and seeing success, Brian and Todd were recruited to be sales reps for the company; thus, the distillery doubles as a GENIO showroom and training center. That equipment also produces Union Grove’s maple version of their Vly Creek Vodka, which is distilled completely from maple syrup created by Tree Juice Maple Syrup, another Arkville-based business. Tree Juice also supplies the syrup that’s used to produce Union Grove’s Catskill Mountain Maple Spirit. Aged for at least six months in oak barrels that were once used for bourbon, then maple syrup, the spirit is its very own classification and is one of the more unique beverages you’ll find.

The distillery also has a selection of infusions— from black tea to jalapeño to a pumpkin flavor that’s offered in the fall—that are quite popular.

“It became a small specialty but we couldn’t keep it on the shelf all summer,” says Todd. Summer is when Union Grove buzzes. Folks along the Route 28 corridor stop into the distillery for drinks inside a modern, rustic Catskill tasting room. Pick a spot at the timber bar capped by a beautiful copper top and order samples (three 0.25-ounce tastings), or ask for a craft cocktail that really shows off Union Grove’s unique offerings. 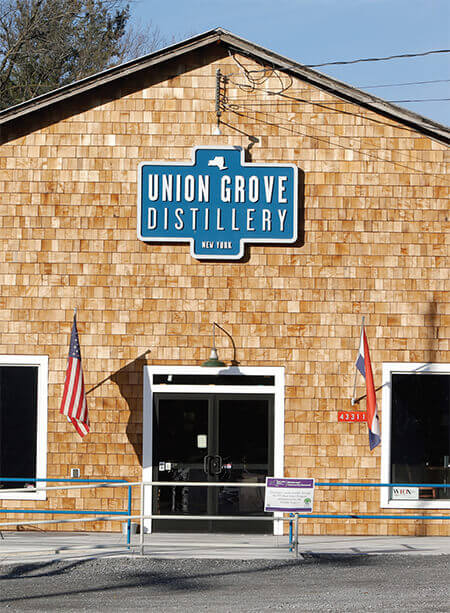 The distillery also has a selection of infusions—from black tea to jalapeño to a pumpkin flavor that’s offered in the fall—that are quite popular with visitors. A few local craft beers are available at the bar, too. And starting this summer, guests should be able to purchase and order rye whiskey, as Union Grove finishes up its first batches. A larger batch of rye is due in 2019. Gin is also on the table, but Brian and Todd are working out ways to make it unique to their style.

While the distillery doesn’t serve food, it occasionally partners up with food trucks and welcomes outside bites. So bring a picnic and the kids, because the distillery has a separate kids’ space, plus a beautiful stone fireplace, a 100-year-old piano that’s perfectly playable, plenty of indoor seating, and an outdoor patio that seats about 25-30 people.

The distillery is a family at its core. You may see Brian’s and Todd’s wives helping out on weekends, while Brian’s stepson sometimes tends bar and works at farmers markets. Todd has kids, too, but they’re ages 8 and 12, so it will be a few more years before they can begin working. The distillery also hosts events by clearing out a production space for large gatherings such as concerts, movies, burlesque nights, birthday parties, and bridal showers. Wedding parties like coming into the distillery on summer weekends, too. The proof (pun intended) is there: Union Grove is well-positioned to take advantage of the modern Catskills renaissance, and they invite you to join them in the fun.