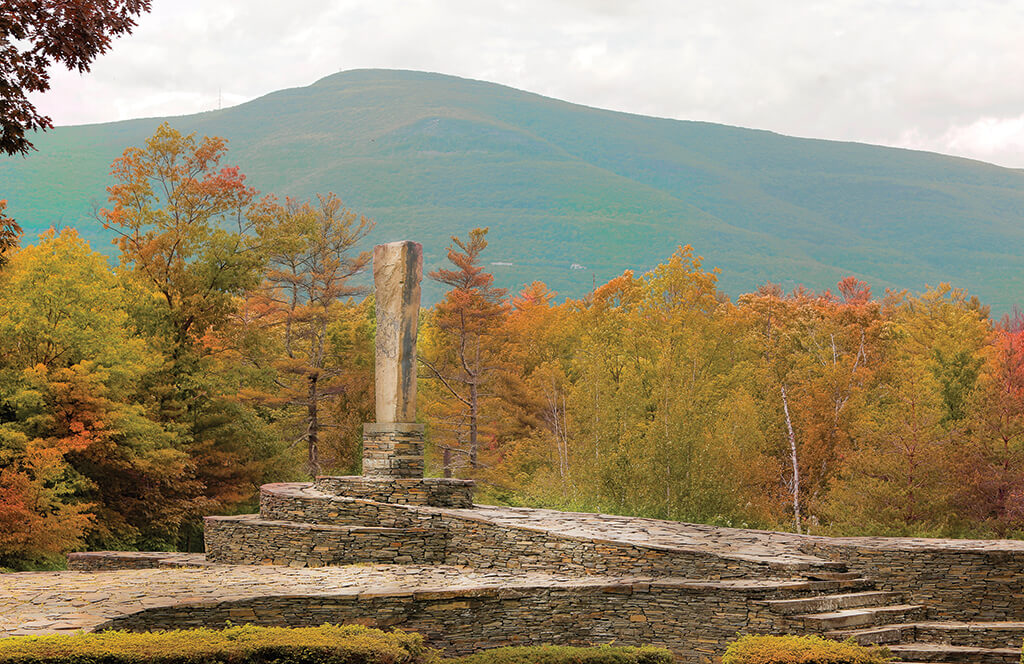 The stone walkways lead to a central swirling structure that rises three stories above ground to reveal a nine-ton naturally formed abstract monolith.

“One of the largest and most beguiling works of art on the entire continent and the greatest earthwork sculpture in existence,” is how Architectural Digest once described Opus 40. This vast environmental sculpture park and museum is located in High Woods, a small hamlet in the town of Saugerties. Fashioned from an abandoned quarry over a period of 37 years by sculptor and quarryman Harvey Fite (1903–1976), the site was the home of Fite’s studio, garage, blacksmith shop, and, eventually, Quarryman’s Museum. 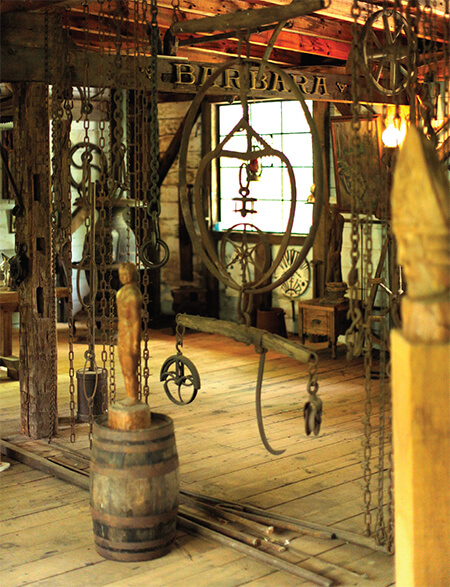 This marvelous sprawl of dry stone ramps, pedestals, and platforms spanning six-and-a-half acres of bluestone quarry offers a truly unique experience to every visitor. Gorgeously sculpted pathways that meander through the grounds, along with pools and fountains that spiral up from the bedrock, allow visitors a chance to climb, wander, meditate, and explore. The stone walkways lead to a central swirling structure that rises three stories above ground to reveal a nine-ton naturally formed abstract monolith. There is perhaps no better place to witness and experience the intimate relationship between nature and art than here at Opus 40.

As a professor of sculpture and theater at Bard College, his alma mater, Fite purchased the abandoned 12-acre quarry site in 1938 from the widow of the last quarry master. Here he built his house and studio and relocated from the Maverick Art Colony in Woodstock. His aspiration was that this rapture of natural materials would supply him with raw stone for an outdoor sculpture gallery, showcasing large, carved stone works of art that would embrace a subject he cared about deeply: “a world at peace and reconciliation between all people and cultures.”

Drawing inspiration from restoration work he had done in the Mayan ruins of Honduras, Fite began implementing rubble from the quarried area and using traditional quarryman hand tools to build terraces, ramps, and walkways to lead to individual statues.

In 2001, Opus 40 was added to the National Register of Historic Places. It has become a popular tourist attraction, wedding venue, and concert venue

After 20 years of crafting sculptures, one of which was titled Flame—a female figure with arms upraised to the sky—Fite realized that the scope of his work was surpassing his original vision. This one-and-a-half-ton sculpture was now too diminutive for the expansiveness and scale to which Fite’s work had grown. So in 1964, he replaced it with a nine-ton bluestone pillar that he raised out of a streambed, with plans of carving a sculpture once it was in place. This monumental task of placing this enormous stone into a hand-formed crater was executed by adapting the principles used by ancient Egyptians and other ancestral methods. The process was intricate and to most would have seemed impossible. But by utilizing a calculation of extreme engineering precision, Fite lowered the huge monolith, albeit asymmetrical, into place … held entirely by its own weight and balance.

His original plan to carve a representational work out of this humongous stone was overtaken by Fite’s realization that it had become an immense abstract sculpture in its own right! A natural piece of art! Over half a century later, this magnificent monolith still stands and is one of the park’s treasured marvels. 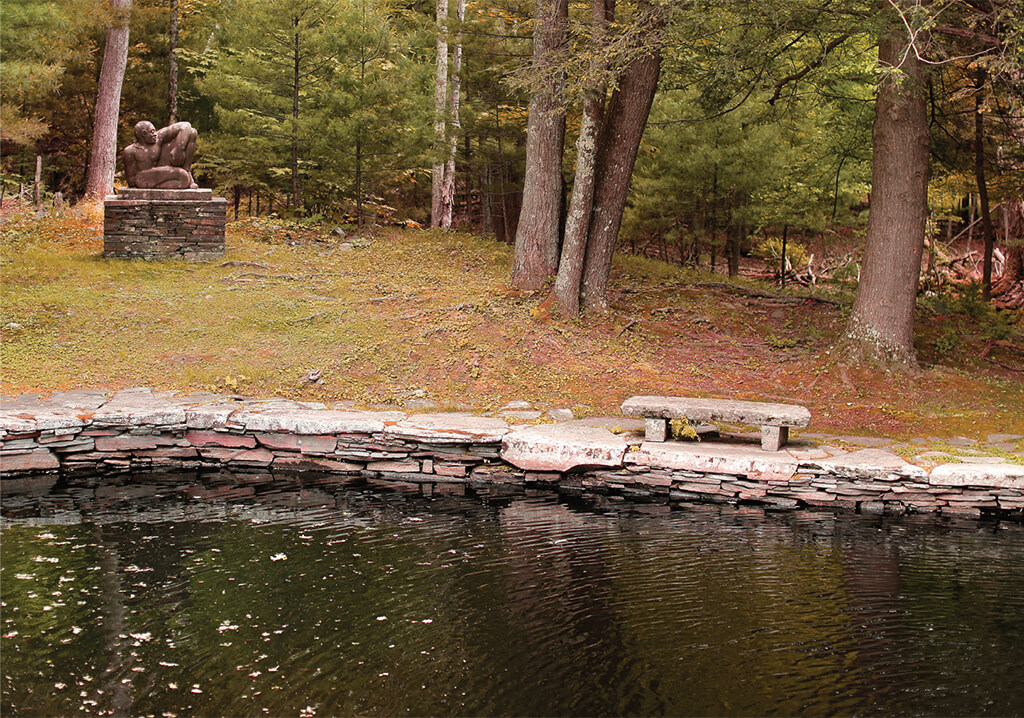 There is perhaps no better place to witness and experience the intimate relationship between nature and art than at Opus 40.

Fite relocated Flame to nearby grounds, along with other carved representational pieces: Tomorrow, a seated African or African-American male; Prayer, a supplicant child on her knees, with hands clasped in front of her; and The Quarry Family, figures of a man, a woman, and two children. He continued working on the more natural and abstract sculptural concept for the remainder of his life.

After three decades as a Bard professor, Fite retired and created a museum to display the venerable tools and traditions of quarrying. The anthology includes historic, hand-forged quarrying tools, along with farming, blacksmithing, and carpentry accoutrements. In May 1976, 37 years after the birth of his massive stone creation, the 72-year-old Renaissance man died in an accidental fall while forging ahead on his dream.

His widow, Barbara Fite, who had been an imaginative, artistic colleague and supporter of her husband’s goals and visions, created a nonprofit group to administer Opus 40. She opened the park to the public, which also showcases his other wood and stone sculptures throughout the 70-plus acre property.

In 2001, Opus 40 was added to the National Register of Historic Places. It has become a popular tourist attraction, wedding venue, and concert venue. Opus 40 provides a marvelous milieu throughout the year for theatrical productions, exhibits, and lectures, and has been a stage for various performers over the years, such as Sonny Rollins, Jimmy Cliff, Orleans, and Pat Metheny. 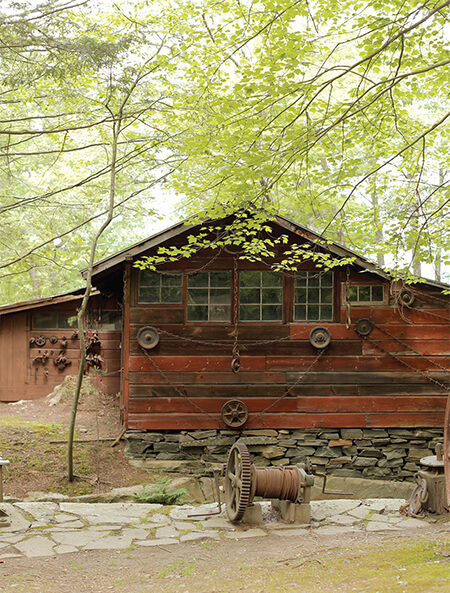 • After three decades, as he was being pressured to name his ongoing masterpiece, Fite bantered, “Classical composers don’t have to name things … they can just number them, Opus One, Opus Two, and so on.” Hence, Opus 40. Opus is the Latin word for “work” and 40 represents the number of years Fite expected to work to reach completion.

• The band Mercury Rev recorded the song “Opus 40” on their 1998 album Deserter’s Songs.

• The music video for Amanda Palmer’s interpretation of Pink Floyd’s “Mother” was filmed on the site in 2017.

TIME TO HIT THE SLOPES!

8 FUN THINGS TO DO THIS SUMMER