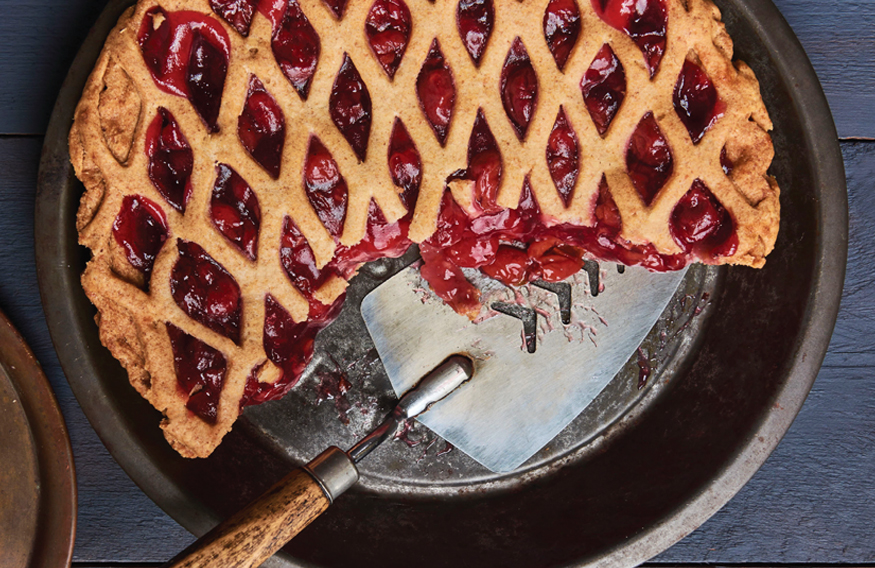 Way back in 1902, an English writer suggested that Americans were eating too much pie, and The New York Times responded indignantly. “Pie is the food of the heroic,” wrote the editors. “No pie-eating people can ever be permanently vanquished.” Happily, here in the Hudson Valley, pies are plentiful and exquisite and you’re never far from a source. And especially at harvest time, as the holidays draw near, our bakers outdo themselves with sweet offerings to savor. Looking for a heavenly dessert to serve to your personal heroes? Check out any of these outstanding stops on a Pie Tour of the Valley. Treat yourself, then order up a few in advance to put the crowning glory on your holiday feast. 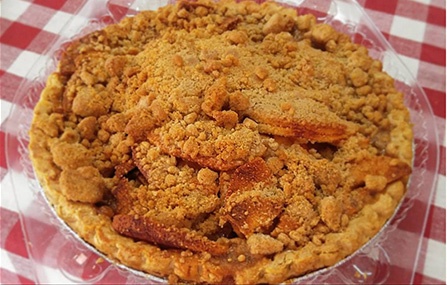 At Jenkins-Lueken Orchards, a favorite New Paltz stop, you can have a u-pick adventure while the weather holds out, and browse wreaths, Christmas trees, and plentiful foodie gift items after that. Pies are a point of pride. “Our best seller is the apple, regular crust and crumb. We make it from the sweetest apples, so you get minimal sugar but a very tasty, good-sized deep dish pie. We sell 100 to 150 a week in October.” You’ll also find pumpkin and pecan. 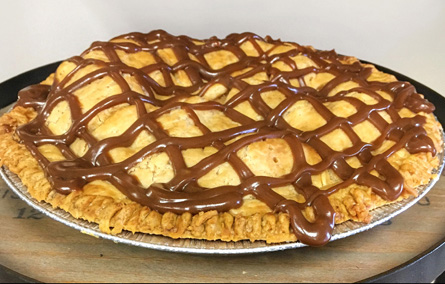 On the other side of the Shawangunks, in Accord, you’ll find Saunderskill Farms. They’ll fix you a delicious soup-and-sandwich lunch while you browse, and live music events are a regular thing here. Pies, though, remain a major draw. “People love the caramel apple walnut, as well as our classic apple, pumpkin, and pecan pies. We’ve been making pecan pie the same way for 20 years—we find a winning recipe and stick with it, and people just keep on coming back for more.” 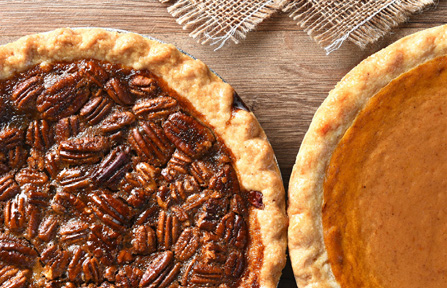 The Apple Bin is a four-season farm market and country store located in pretty Ulster Park. Should you awaken early craving pie, they’ve got you covered—they open at 7:30 each morning, with the exception of a few holidays. Specialties baked both on- and off-site include apple, pumpkin, and pecan. 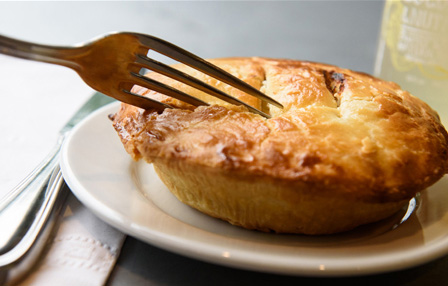 At Frida’s Bakery and Cafe in Milton, you can let your young’uns romp in a lovely play area with giant blocks and a pretend kitchen while you savor your tasty pie—or sign them up for a kids baking class. Along with fruit pies in the fall, Key Lime, and Mississippi Mud Pie, Frida’s makes rib-sticking pot pies from chicken and pulled pork year round. “We’re pretty proud of them,” says Frida’s. “They’re made fresh daily and really solid—people love them.” 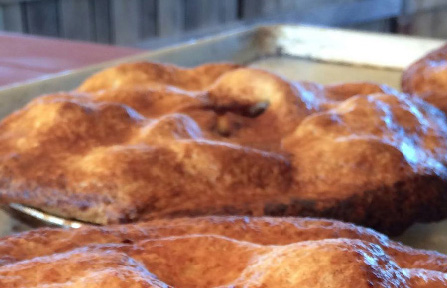 Twin Star Orchards is a dog-friendly u-pick operation and more. Their farmstand includes a hard cider tasting room, with their own brand of raw hard cider among others. On weekends, they also offer wood-fired pizzas and burgers to savor. When it comes to the pies, they are as real as it gets. “We do apple pies in season starting the second week of September, when the main harvest comes in,” says farmstand manager Lindsey Storm. “Our pie lady [Christina Zitzs] comes in and makes scratch crust; her kids come with her and we have pie-making nights. Our pies have no corn syrup, no added sugars—just an honest pie that’s extremely delicious.” 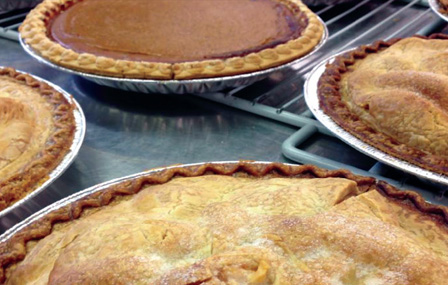 Wallkill View, located on the flats just west of New Paltz village, stays open through Christmas Eve to help you celebrate your holiday season with pie and more. “Apple is always a favorite, and then pumpkin starts around the end of August,” says a Wallkill View representative. “In summer we do bumbleberry—it starts as apple and adds blackberries, strawberries, rhubarb, raspberries….” Oh yeah. 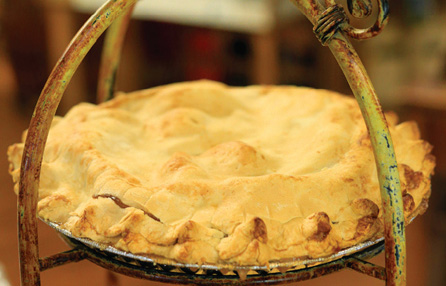 At the Catskill Mountain Country Store’s two locations you’ll find candy, toys, and homemade, gourmet goodies of all sorts—perfect for mixing some gift-shopping with your pie adventure. “Apple and apple crumb are usually our biggest sellers, but you can special order anything you want,” says a representative. “Chocolate cream, lemon meringue—just let us know and we’ll make it.”

Prospect Hill Orchards, set in the lovely hills of Milton, is a u-pick with all the rich flavor of Hudson Valley history—the Clarkes currently farming the land are the sixth and seventh generation. They are celebrating the farm’s 200th birthday the weekend of September 23 and 24, and are hosting a Johnny Appleseed Cider Fest on October 15 and 16. Apple pies baked from the Clarke family recipe are available starting in mid-September. “We do apple pies, a double crust and a crumb topping, and we also sell them frozen and unbaked so you can take one home and bake it up hot,” says Judy Clarke. “We also do a Walk Away Pie, a handheld size that’s easy to take on a hike or a picnic.”

Here in the Hudson Valley, pies are plentiful and exquisite and you’re never far from a source.

Meredith’s Bread in Kingston is the answer to many a prayer—their four different sizes of 14 different kinds of pie are available in regular, gluten- free, and unsweetened varieties. The gluten- free goodies are prepared in a dedicated kitchen and great care is taken to protect even the airflow; celiac sufferers can count on safety with their sweetness. “Pumpkin’s a big one, also strawberry rhubarb, cherry, apple, and blueberry crumb,” says Amanda. “You can come in and try a six-inch tart, sample different flavors ahead of the holidays.” 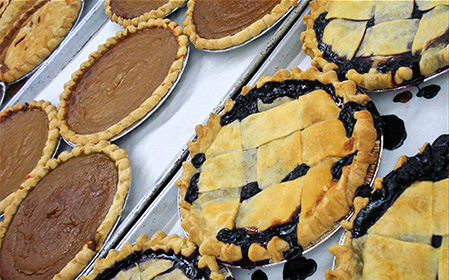 Over at Wright’s Farm in Gardiner, pies are a revered family tradition. “Our first pie was sour cherry, ‘cause that’s what Grandma Ann made, and they’re still Grandma Ann’s pies,” says a family member. Seasonal varieties nowadays include apple and blueberry (regular and crumb), peach, raspberry, black raspberry, strawberry rhubarb, and pumpkin in autumn, all in hand-drawn boxes you’ll want to keep forever. 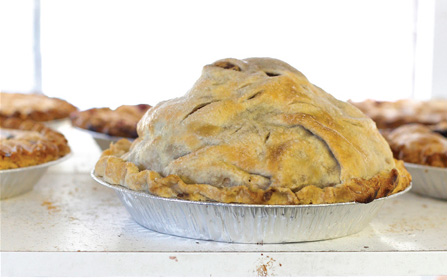 Tantillo’s, also in Gardiner, is another true Hudson Valley classic, marketing the crops of their fourth-generation fruit and vegetable farm. This time of year, they’re busy baking the ”mile-high” apple pie. “It’s pretty spectacular,” we’re told. “It’s got three and a half pounds of apples in a domed crust.” They’ve also got pumpkin, pecan, and many other classics.

SHOP LOCAL IN THE HUDSON VALLEY