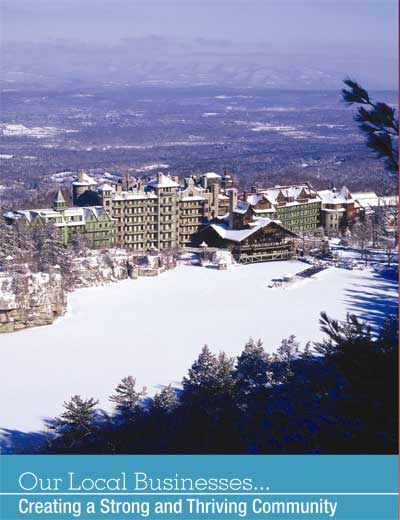 
Internationally famous, yet familiar to generations of locals who’ve worked and played there, Mohonk Mountain House forms the bedrock of a legacy that has grown over four generations, sprouting non-profit arms (Mohonk Preserve and Mohonk Consultations), while providing a getaway that’s down-to-earth homey and fairy-tale fabulous at the same time. Not many localities can boast of a historic Victorian castle beside a sparkling gem of a mountain lake, much less one with free Wi-Fi in every room, but that’s Mohonk.


Founder Albert Smiley’s goal was a place where guests would be renewed in body, mind, and spirit. His vision is recognizable 145 years later: there are no televisions in the rooms, and low-tech, outdoorsy and family-centric pleasures are emphasized. The latest addition, an eco-friendly full-service spa, opened a couple of years ago and was promptly ranked #1 by no less an institution than Conde Nast Traveler. Albert didn’t allow alcohol, but his descendants see no harm in a glass of wine, and not just any wine; Mohonk’s list is regularly recognized by both Wine Spectator and Wine Enthusiast magazines.

Bert Smiley, the fourth-generation president, started out on the garden crew at the age of ten. As Smileys do, he left the mountaintop for a while to explore, engage, and learn, and he had himself quite a time, switching his major from forestry at Syracuse to economics at Princeton, where he earned a Ph.D. and went on to a post-doctoral fellowship at the Princeton Center for Energy and Environmental Studies. Ten years of service at the Economic Analysis Group within the Antitrust Division of the United States Department of Justice followed before he came back to the mountain as president of Mohonk in 1990.

It’s a job he loves. “There’s no “business as usual” when running a resort, and that can be an inspiring and energizing thing!” he says. “One of the most wonderful aspects of this journey has been the people. I’m constantly inspired by the talents and energy of our entire Mohonk team—and the guests we meet are terrific.”

When asked who has been noteworthy over the past 145 years, Smiley says, “Five former Presidents of the United States have stayed at the resort, including Rutherford B. Hayes, Chester Arthur, Theodore Roosevelt, William Howard Taft, and William Jefferson Clinton. Naturalist John Burroughs came, as he himself put it, ‘to savor and interpret the wonders of nature.’ The Road to Wellville was also filmed here in 1994, and we hosted Anthony Hopkins, Matthew Broderick, Dana Carvey, John Cusack, and Bridget Fonda for six weeks.”

Local families who opt for Mohonk celebrations and day-pass guests just looking to soak in the mountaintop ambience are every bit as welcomed as the A-listers. “It’s a pleasure to have people come here to relax and renew and also to celebrate special occasions. Over the years, we’ve watched young guests grow up and return with their own families,” Smiley says.

“Our goal is to remain ‘the same, only better.’” The new 30,000 square-foot-spa wing, geothermal with a green roof, features an indoor heated pool, comprehensive fitness center, and a yoga/motion studio. The new spa also includes 16 treatment rooms, a solarium with a stone fireplace, relaxation verandas, steam and sauna rooms, and a full-service salon.

The heritage, however, goes deeper than simple good times. “From 1895 through 1916, founder Albert Smiley hosted the annual Lake Mohonk Conference on International Arbitration, for which he was nominated for the Nobel Peace Prize in 1912,” says Smiley of Great-Granduncle Al. “These meetings were the forerunners of the Hague Conferences, providing a context for the League of Nations and later the United Nations.” Mohonk Consultations, founded by the late A. Keith Smiley in 1980, hosts thought leaders every year; their 2014 conference is on local food security. Bert is active in communal affairs, as Smileys have been for generations, serving on numerous local and national boards.

At holiday time, Mohonk is dressed in updated-yet-classic Victorian finery. “Upon arrival, guests are welcomed by a 60-foot Austrian Pine sparkling with 1,500 LED lights,” says Smiley. “Hand-made evergreen swags, Victorian decorations, and many beautifully decorated Christmas trees are on display throughout the house. Families who want to create a festive atmosphere in-room can inquire about holiday decorations, including an ornamented ‘eco-tree’ and stockings hung above their fireplace, filled with goodies. Cozy wood-burning fireplaces can also be found in 124 of our 259 guest rooms.”

Cherished traditions include “a family Yule-log hunt, a trim-a-tree party, the nightly lighting of the menorah during Hanukkah, holiday craft-making, and caroling.” Snow tubing and cross-country skiing are popular when weather allows, and there’s ice-skating at the gracious pavilion.

The 145th birthday of this unique blend of tomorrow and yesterday—the jewel in the crown of the Gunks—is being celebrated this year with specials, updated menus and décor, and a revamped display of historic art. Whether you’re a neighbor or a visitor from afar, stop in for renewal and refreshment—the dream of the Smileys offers an enchanted oasis from the ordinary world below.