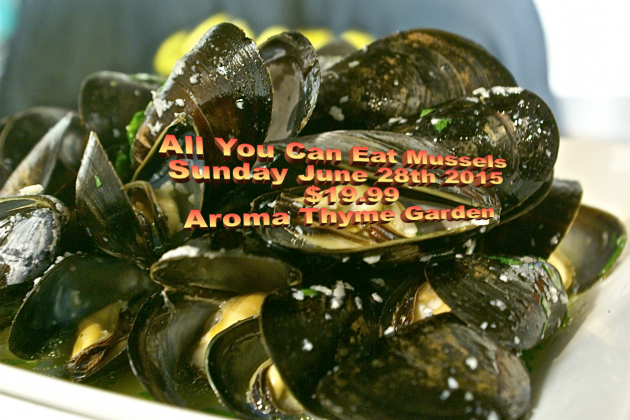 What: All you can Eat Mussels in the Aroma Thyme Garden

Details: All You Can Eat Mussels! And we are featuring Belgium Beer. It’s a perfect match. We are doing all you can eat mussels for $19.99 Sunday June 28th 2015. 1 pm - 5 pm in the Aroma Thyme Garden.
Beer is priced separately.

Did you know Mussels are farmed on the sea floor as well as in suspended systems are a "Best Choice" for sustainability because of the minimal impact to surrounding ecosystems or cumulative ecosystem impacts.

History and significance of Belgian beer

Beer in Belgium varies from the popular pale lager to lambic beer and Flemish red. Belgian beer-brewing's origins go back to the Middle Ages. There are approximately 125 breweries in the country, ranging from international giants to microbreweries. In Europe, only Germany, France and the United Kingdom are home to more breweries. Belgian breweries produce about 800 standard beers. When special one-off beers are included, the total number of Belgian beer brands is approximately 8,700. Belgians drink 93 liters of beer a year on average. Beer has been made in Belgium since at least the Middle Ages. It is believed today that beer was brewed at some monasteries during this period; however, no written proof exists. The Trappist monasteries that now brew beer in Belgium were occupied in the late 18th century primarily by monks fleeing the French Revolution. However, the first Trappist brewery in Belgium (Westmalle) did not start operation until 10 December 1836, almost 50 years after the Revolution. That beer was exclusively for the monks and is described as "dark and sweet." The first recorded sale of beer (a brown beer) was on 1 June 1861.

In Belgium, beer is more than just a frothy beverage - it is a culture. With over 450 different varieties, many Belgian beers have personalized beer glasses in which only that beer may be served. The shape of each glass enhances the flavor of the beer for which it is designed. This tradition may seem like behavior reserved for wine snobbery, but Belgians take their beer seriously - and with good reason. The country has enjoyed an unparalleled reputation for specialty beers since the Middle Ages. Connoisseurs favor Belgian beers for their variety, real flavor and character.

It is easy to see the depth to which beer has become one with Belgium's culture. What other country has a driving tour through the countryside called the Beer Route? After a day of castle hopping, visitors can stop by one of the local cafés to enjoy some chocolate with their beer, as their worries melt away. Whether you were visiting a brewery, sitting in a café or attending a festival, visitors will remember the first time they tasted their favorite brew.