A Collective by the People 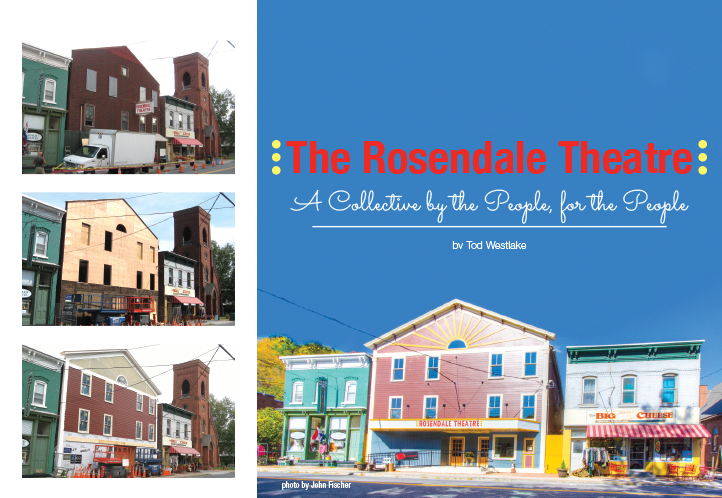 Rosendale is a town that has seen a lot of change during its existence.
Once a stop on the storied D&H Canal and famous for its naturally occurring cement, Rosendale is now an ex-urban oasis that has a little something for everyone. One of the keystones in the town's eclectic mix of businesses, eateries, and other commercial venues is the Rosendale Theatre. Operating as a movie house since 1949, the theatre has been a place where locals can leave behind the mundane world and enjoy a few hours of cinematic escapism.

But it was almost lost a few years ago when the Cacchio family — who originally founded the theatre — decided to sell it and move on. The good news is that the efforts to preserve the theatre turned out to be successful. Today the theatre is owned and run by the Rosendale Theatre Collective, the non-profit group that was formed when it looked like the community could permanently lose the theatre. After a little wrangling and a whole lot of fundraising, the group was eventually able to secure the purchase of the theatre, thereby ensuring that the venue would remain an important fixture in the local community.

Ann Citron is now the managing director of the Collective, and she has been an important part of the project since its inception. "I've been involved since the very beginning, since we all started to meet to brainstorm about how to purchase the theatre," Citron says about the purchase. "It's now owned by the community—it’s a non-profit, and the community fundraised for it."

Citron says that the process began when a few local residents got together after learning that the Cacchio family might sell the theatre. The fledgling group decided early on that it didn't want the theatre to become just another part of one of the big movie chains—or, worse, that it might close for good—so purchasing the property outright became the focus.

"We wanted to keep this anchor business in the community," Citron says, "and there were a number of people who were interested in being a part of this. That number grew and grew, and we eventually started fundraising."

The turnaround time between the initial fundraising efforts and the actual purchase was just ten months, so the group was able to bring about the transition in a very short period of time, a testament to what can be accomplished in a community when it puts its collective shoulder to the wheel. During this process, the group staged events and other activities that were designed to raise funds for the project. "It was really exciting," Citron says about watching everyone bring their respective resources into the project and hearing the different ideas people had about how to proceed. Ultimately, the efforts proved to be very successful.

But then came the less glamorous portion of the endeavor: actually running the theatre. To this end, the group broke the project down into different committees, harnessing the individual talents of the folks involved. "Not everyone can do everything, nor do they want to," Citron says. "So, we had a programming committee, and finance, and marketing, etc." One of the first things the committees did was to start looking at capital improvement projects to help bring the old theatre into the 21st century. This included plans for renovations, some of which has already occurred and some that will be addressed in the coming years. Grant money, the lifeblood of any nonprofit, helped to put this wheel in motion. "We received a grant through Assemblyman Cahill's office for renovations and capital improvements, so we've been using that money," Citron says. "And then we received a Tides Foundation grant about five months ago, so we had the money to begin phase one."

This included making the theater compliant with the federal Americans with Disabilities Act (ADA), which meant adding a wheelchair ramp and lift. The building has also undergone major improvements, including new siding and energy-efficient windows. And the interior has been partially re-insulated using modern materials, with the lobby receiving new carpeting and a coat of paint, as well as improvements to the upstairs office. Finally, the Collective also wanted a traditional movie house marquee in order to help make the theatre stand out a bit more. "That way people can easily see what's playing and give the theatre a beautiful facade," Citron says.

This translates into valuable foot traffic for the other businesses that are located along Main Street, with the theatre acting as an important anchor. The theatre recently held its grand reopening to celebrate the renovations that have already taken place. Citron says that the community response was quite good, with more than 150 people attending the reception. "There was live music, and people were celebrating," Citron says. "I think there is something to be said for being a part of something that will endure long after you're here, and that this really becomes a heartbeat in a community. People come down and they have dinner in one of our restaurants and then they see a movie. So, we are very keen on local economic development through the arts. That's a huge part of our mission. We want everyone to do well and all the businesses to really thrive.

Future plans for renovations include making the bathrooms ADA compliant and redoing the lobby so that it will function better. There are also plans to help reduce the traffic sounds from outside the building, install new lighting, and upgrade the movie screen. Lastly, the third floor of the building right now is simply open space, but the Collective plans to turn this into space that can be used by the community. "It's mostly just this big, raw, beautiful open space," Citron says. "At some later date, we will convert this to office space or rehearsal space or space for classes."

And things continue to go well for the theatre. The Collective just passed its third anniversary as owners/operators this past August. During this time, the group has worked to find out exactly what kind of programming would work best. In addition to films, the group has brought in different types of entertainment, including live theater. 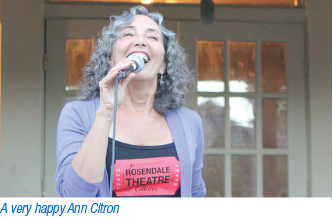 But the main focus will be on film. You typically won't see big Hollywood blockbusters at the Rosendale Theatre. Instead, the Collective looks for movies that are well-received critically, like the film The Butler. You will also get to see documentary films, such as When Comedy Went to School, a film about the Borscht Belt's important influence on the rise of modern stand-up comedy. "We do a little bit of everything—indie and Hollywood and docs and a little foreign. We really try to provide a mix," Citron says. Another important aspect of having a locally ownevd theater, according to Citron, is the fact that you are supporting your local community by voting with your wallet. When you spend money locally, it helps everyone, as those dollars circulate throughout the economy.

So, the next time you are looking for a little cinematic entertainment, take a look at the calendar section at rosendaletheatre.org or call 845-658-8989. "We're mainly a movie theater," Citron says. "But we also like offering other things so that we can bring in a wide audience and appeal to broad tastes."