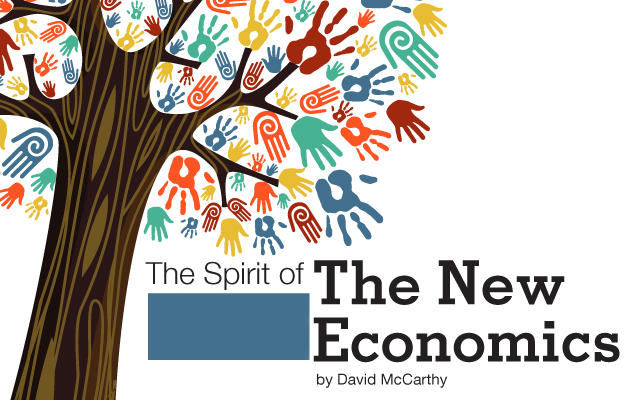 If you look at the tremendous economic turmoil in the world today — the poverty, the instability, the inequality, not to mention the environmental devastation that's only going to get worse — you may wonder if anything is going on in the field of economics that presents any real hope of solutions.

Turns out, there are folks who've been talking sense about such things for a very long time. What is now called The New Economics has deep historical roots, but it really emerged with seminal efforts of E.F. Schumacher in the 1970s. His groundbreaking book, Small is Beautiful, has a telling subtitle: Economics as if People Mattered. Schumacher was a contrarian in regard to the established economic theory of his time (and largely, ours). He disagreed with an emphasis on large-scale, centralized production, and with letting materialism overshadow human values. As well, he passionately brought concern for the environment into the economic conversation. As such, he broke not only with neo-classical economics (the folks who believe that free-market capitalism solves all problems) but with the socialists as well, with their emphasis on centralization and government control. He talked about localization, decentralization, and even "Buddhist economics." Sadly, Schumacher lived only until 1977, but his ideas have taken firm root. Writers like Hazel Henderson, Herman Daly, and many others have continued to develop this line of economic reasoning, forming an impressive (if mostly under the mainstream radar) body of thought well known to those concerned with the environment, social justice, and sustainablility.

Economics is no longer the exclusive domain of academia and government policy wonks.

Schumacher's personal collection of books and papers are preserved in Great Barrington, Massachusetts by a group originally called the E. F. Schumacher Society, and which was re-named in 2010 as The New Economics Institute. In addition to a highly regarded annual lecture series which now takes place in New York City, the group has pioneered work in land conservancy, and helped launch Berkshares, one of the most successful local currencies ever.

As a result of deep and authentic roots laid down by patient small-scale, local work, The New Economics Institute is blossoming as an organization capable of catalyzing and leading real movement for change on the regional, national, and international stages. An affiliation with the British-based New Economics Foundation has deepened their programmatic resources and extended the human network that is really at the core of these sorts of organizations. In June of this year, the Institute sponsored a conference called Strategies for a New Economy at Bard College. The conference was a tremendous success, selling out a month or more in advance and attracting hundreds activists, leaders, and thinkers from all over the world. On the opening evening of conference, world-renowned climate activist Bill McKibben set a tone of both urgency and optimism as he described extraordinary efforts taking place to build a worldwide movement to address the climate crisis (see www.350.org).

New Economics Institute President Bob Massie kicked off the first full day of the conference by expressing the excitement he felt at the energy of the participants, and pointed out that this new approach to economics truly is a movement, and that we can act as a movement. He emphasized that we are not just concerned with pointing out what is wrong with the failing economic models of the past, but with laying down a path toward an approach to economics that is based in wisdom, however long it takes.

The success of the June conference at Bard says a lot. One lesson to be learned is that economics is no longer the exclusive domain of academia and government policy wonks. Indeed, what has come to be called the New Economics is as much an activist movement as an intellectual one. It is concerned with work for economic justice, with financial and monetary reform (and particularly local currencies), with environmentally sound agriculture and land preservation, and with the overarching issues involved with transforming our mindsets into those that are going to work for all of humanity going forward into the future.

The New Economics is about going the distance in terms of honesty and depth.

This democratization of economics is a reflection of the fact that we can no longer expect (and actually never could expect) that solutions are simply going to be handed to us. We have to be part of the solution. New approaches to livelihood, community involvement, and finance are certainly ready to be explored. Are we ready to make a shift? The Transition Movement is directly related to these sorts of directions and is gaining a lot of participation here in the Hudson Valley. Tina Clark, a veteran Transition Trainer, spoke at the June conference, and she met with local Transition folk at Bard afterwards. I was fortunate to be in that group, and was struck by her incredible enthusiasm and patience for working with people. She emphasized that to do this work we have to soften our hearts. It's about engagement and cooperation.

This dimension of human openness and kindness is at the heart of the spirit of the New Economics. Are we going to live in opposition to each other, to nature, and even to reality, or are we going to find the honesty and the wisdom to see things clearly and live together on the planet? It may seem like feel-good talk to suggest that there even is a way that we could do that, and that may be so if we merely look at things superficially. But the New Economics—speaking of it here as a discipline—is about going the distance in terms of honesty and depth. It is about looking at the implications of human and ecological interdependence with clarity. Given the complexity of the problems we face, that's the only approach that's going to work. And with our honesty, we have a shot at transcending our learned dogmas and assumptions, not to mention our cynicism.

This spirit of the New Economics starts with personal responsibility. If you haven't started there, you haven't started—but there's always the possibility of starting. Once we have that sense of personal engagement, to enter into the spirit of the New Economics is to see the work before us with a feeling of optimism and possibility. The fact that there is a real community, a real movement, of people already engaging in this work is a tremendous source of confidence and inspiration, such that we could each find our place in it.

The Little Theatre that Could…