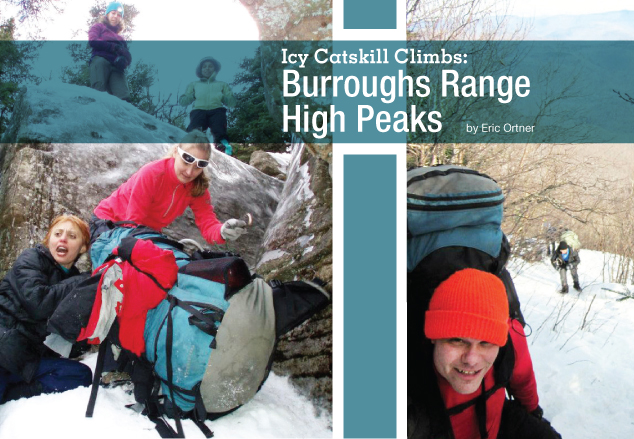 For most people living in the Northeast, November is the end of the camping season and the beginning of the ski season. But there are a select few hearty souls who know that the best camping occurs between the months of December and April because there are no bugs and the mountain views are spectacular. This is especially true in the Catskills, where the magnificent peaks are shrouded by leaves for most of the year.

The Catskills’ terrain is surprisingly deceptive to those inexperienced with the forest preserve’s 35 high peaks. When traveling highways like Route 28, the Catskill summits appear to be gently rolling slopes. I was once fooled by this illusion, which is created by the area’s abundant deciduous trees. However my reality was suddenly altered when I decided to backpack the Burroughs Range in late January of 2012 as part of my quest to climb all of the Catskill’s 35 highest peaks in under six months.

The Burroughs Range is located in Shandaken, NY and has two access points either via Big Indian-Slide Mountain Road to the west or Woodland Valley Road to the east. The range is named after the famed early conservationist and naturalist John Burroughs who frequented the area and wrote about his experiences there. The Burroughs Range is comprised of three of the Catskill High Peaks over 3,500 feet, including its tallest summit, Slide Mountain at an elevation of 4,190 feet. The other two summits are Wittenberg (3,780 feet) and Cornell (3,860 feet).

I had climbed Slide Mountain several times before I decided to winter camp on the Burroughs Range. The popular Phoenicia East Branch Trail, which I had ascended in the past, is a fairly gradual ascent. I foolishly underestimated the challenges that lay hidden below the Catskill foliage. My foolishness was further compounded by the unseasonably light winter of 2012. There was hardly any snowfall, and my past experience with winter camping had taught me to bring plenty of warm clothes. This all added up to a very heavy and large backpack filled with all of life’s necessities with no regard being paid to the weight of the burden that was to be carried. The necessities included two coats, two pairs of gloves, two hats, extra cooking pots, a camp stove and enough fuel for a week, tons of food, an incredibly heavy negative 20-degree sleeping bag, and a seven-pound, three-season tent—all adding up to about a 60-pound pack.

Eight of us started our journey from the Woodland Valley Campground. It was a cool clear January morning, but the light winter caused us to delay putting Microspikes (ice traction) over our hiking boots. There may not have been much snow, but the cold nights had left the Catskills covered in a thin layer of ice. So we immediately realized that spikes would be required as we started our first steep ascent up Wittenberg Mountain. The trail became more gradual much to our relief, but this respite did not last for more than a mile or two.

The path quickly began to climb and turned into a rather vertical rock scramble coated in a thin, but slick sheet of ice.

These are the moments when one generally realizes the fragility of existence—a feeling that would become all too familiar to me over the next day and a half. In addition to the perilous icy conditions, the 60-pound backpack I was attached to was starting to seem like a colossal mistake. Oh, why did I bring the whiskey, the extra food, the extra clothes, that friggin’ saw? I had vastly underestimated the rugged terrain of the Catskills. After two or three more rock scrambles the expedition broke for lunch. None too soon; I needed to get some of that weight out of my pack and into my stomach. We continued on up to the summit of Wittenberg, traversing more treacherous areas where missteps would easily result in serious injury. Then suddenly, out of nowhere the misery I was experiencing for the past several hours all became worthwhile. We were blessed with one of the most scenic views in the Catskills The summit of Wittenberg Mountain opens up to an amazing and flat stony vista overlooking the Ashokan Reservoir. The party basked in the warm sun and the accomplishment of completing our first of three summits.

Our journey was far from over, however, and we needed to start our decent into the col between Wittenberg and Cornell. This leg of the trail proved to be a great opportunity for sledding. Several members of the expedition decided to use the ice and gravity to our advantage and slide down the steep inclines on our rear ends. The fun and games were short lived since the descent to the base of Cornell Mountain is only approximately 500 feet, so we were soon faced with traversing our next peak.

Cornell Mountain’s ascent proved to be even more challenging than Wittenberg’s. After two or three more menacing scrambles where the group was forced to cling to trees in order to avoid catastrophe, we met our match, Cornell Crack. The Crack is a very distinct geological feature. It is a 20-foot rock wall with a triangular wedge carved out of it from thousands of years of glaciation. It has limited foot and hand holds making it difficult to scale even on warm days. However the two inches of ice that coated it in the winter seemed insurmountable in Microspikes. 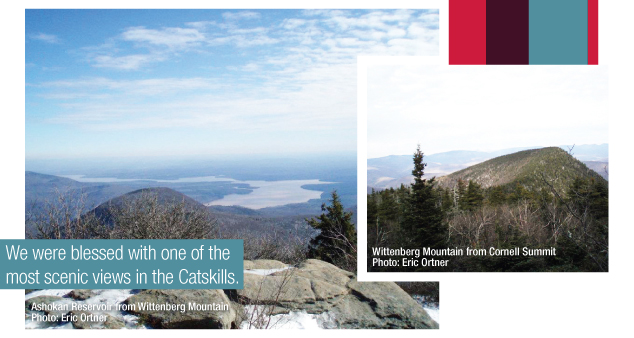 Fortunately, our expedition leader Sudah came prepared with ice climbing crampons. She made short work of the crack as she dug her toes into the ice and shimmied her way onto the summit of Cornell Mountain. The remaining seven of us were stuck, unable to travel any further. It was decided that a rope was required. This was the first time in my 15 years of backpacking experience that I ever met a challenge that required a rope, and here it was two and a half hours north of New York City. Once again on the Burroughs Range, I had established a whole new respect for the Catskills terrain. Sudah began to hoist our packs up to the summit. Then the remaining members of the party used the rope for assistance in reaching our second objective, Cornell Mountain.

It had been a long day and we all looked forward to setting up camp at designated areas on the col between Cornell and Slide mountains. The descent down Cornell, although steep, was relatively uneventful. We reached camp and set up our tents, then we began to focus on dinner, melting snow and ice for water, and the prospects of creating a fire to warm up on what was becoming a very chilly evening. Spirits were high as we drank the whiskey I had been lugging all day and we warmed ourselves around a small fire that struggled for existence in the extremely wet fire ring. After a cold night we broke camp and prepared ourselves for the ascent up the east side of Slide Mountain. Traveling along the col we enjoyed a clear day and a spectacular view of Slide Mountain sprinkled with a blanket of snow. Piece of cake, I thought to myself; I’ve already climbed this thing several times. Wrong! Slide Mountain proved to be the most menacing ascent of the entire journey.

Upon reaching the first steep section I realized I had met my match. The trail, which was basically perpendicular, was covered in a sheet of ice with nothing but a tiny 3 to 6 inch ledge for a foothold. There was no way I could safely make this trek with my heavy pack. Fortunately, there was a small bushwhack route to the left of the actual trail with plenty of trees to brace what certainly would be a fall to one’s doom. Once again my over-prepared backpack was a serious detriment. I slowly dragged my sleep-deprived body up the side of Slide Mountain. Small saplings, which promised to rip out of the thin topsoil, were the only things keeping me from meeting my maker. Somehow I survived this stretch of trail, and I vowed to start bringing a lighter backpack the next time I camped in the Catskills. I slowly clawed my way up the near vertical side of Slide and reached summit.

The summit of Slide is always sort of a disappointment. There you are on one of the highest points of the Northeast and there really is no view to speak of. Still, such a challenging trip leaves you with such a great sense of accomplishment that it is impossible to be disappointed with your location. We ate our lunch as we mingled with other groups of hikers on a beautiful sunny day. We then began to hike back down the mountain to complete our loop back to our cars safely parked on Woodland Valley Road.

All told our Burroughs Range loop totaled 14.81 miles with approximately 6,500 feet of elevation gain. Would I do it again? Probably, but next time I will bring a much lighter pack. I might also spot a car at the parking area on Frost Valley Road in order to skip the stretch of trail that runs along Route 47. This section is relatively uneventful unless you decide to make a side trip up to Giant Ledge, adding approximately two or three miles to your trip.

7 PRINCIPLES OF LEAVE NO TRACE

Swimming in the Hudson Valley

Night Life in the Hudson Valley