It's a Great Time for Home Improvement 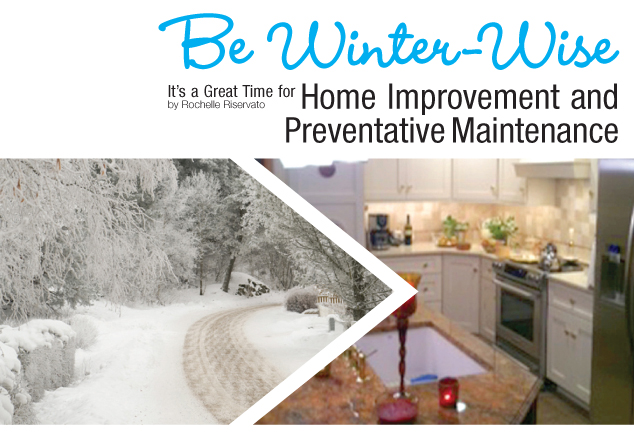 Although you may presume winter’s a time to lie back and hibernate from home chores and improvements—that’s not the case. Winter may even be the perfect time to get special deals or save valuable time by getting a jump-start on springtime projects. Preparations will expedite your planned nice-weather endeavors so once the crocuses start emerging through the soil your project can promptly begin. There are so many preventatives you should engage in—mainly because winter sometimes serves up many conditions that wreak havoc on your home. Tending to these possibilities before they become a reality is definitely called for. Here are some ways that you can make winter a productive time of year while you are basically homebound.

According to Mike of Mike’s Earthworks, prepping a site for an upcoming building event, such as taking down trees for a driveway or structure, is something that can be done in winter. “We do this year-round,” said Mike. Off-season prepping can be a really astute move for homeowners.

Winter is also a great time for indoor projects such as kitchen and bath renovations or spruce-ups. Said Jason from Ingrained Woodworking, “January, when the holidays are over, is a great time to tend to bathrooms and kitchens.” He added that replacing interior doors or doing interior carpentry such as crown moldings, chair-rails, stair railings, or even built-in bookcases are excellent winter projects. It’s an optimum time to paint while the family isn’t traipsing in and out of the house allowing pollen, dust and other outdoor debris in. Jesse from Cabinet Designers believes that the most important winter project can be closets. “Winter is a time for a change of wardrobe and a nice time to transition to reorganization with organized closet shelving systems.” He also added that after the holidays, the nice lull in winter gives homeowners a chance to start the design process of a kitchen that can be done in the spring: “Although we do kitchens year-round, a family can always start grilling outside once the weather allows while we complete the design concept planned during the winter season. He said bathrooms can also be planned and remodeled any time of year. 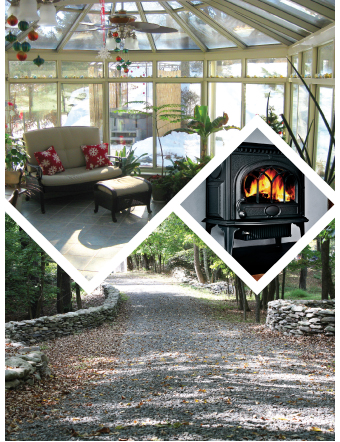 For those who loathe the claustrophobic feeling of a wintry cabin-fever, Chris, owner of Four Seasons Sunrooms, said these outdoor sanctuaries are able to be built year-round. “I have, literally, had people who were ill from lack of sunlight and Vitamin D that had sunrooms built during the winter.” And with all the medical research on the wonders of Vitamin D, a sunroom enables the sun’s rays to healthfully beam down on people and pets, as well as a garden of flowers and plants if you’re so inclined to love four-season botanicals. It’s like bringing the outdoors in—presenting a warm and cozy environment in the middle of the winter. Chris also mentioned he has a brochure dealing solely with the health issues that the lack of sunlight can cause. “It’s also a mental boost; I had some customers tell me I saved their sanity!”

Another way to turn winter into a warm and cozy season is to add a supplemental form of heat to your primary one. John from Fireside Warmth advised, “The many styles and sizes available on wood and coal burning stoves will not only provide major savings on overall heating costs—they can add a whole new dimension on interior décor to any room in the home.” He also mentioned that they last 20 to 30 years.

Since there’s always a spring rush for outdoor projects, Sean at Authentic Stone Works explained that winter is a time that people should think spring and plan ahead on any project involving specialty stonemasonry such as patios, walls, fireplaces, and other custom stonework to avoid the springtime rush. “I can meet a client in winter and design a project with a structural integrity that’ll stand the test of time—along with a design that mirrors the client’s vision.” This way a homeowner can be scheduled for their exterior enhancements when weather permits.

An Ounce of Prevention Eliminates that Pound of Cure:

When it comes to preventatives and maintenance, winter is the premier time Jack Frost presents many a quandary. There’s snow removal, the urgency of preventing ice dams, gutter and roofline defrost, and myriad other tasks that you can either attempt alone or call in the experts. But one thing is for certain—you must start with some preventative maintenance. Aaron from Rice Plumbing explained that it’s vital to remove garden hoses from the outside and store them indoors. Why? “Water can get trapped and crack the frost-free faucet on the inside. It cannot drain itself and might freeze and break.” He also suggested keeping your thermostat above 52 degrees as heating systems burn more fuel in attempting the climb from 52 degrees to a comfortable 67 degrees on cold days. “You’ll end up burning more fuel trying to get the temperature up—in addition, at a temp lower than 52 degrees your pipes can freeze,” he said. Rice Plumbing works throughout the winter with a 24-hour emergency service.

When it comes to safety, whether you heat with gas, oil, wood, coal or corn, both Aaron and Tonya from A&M Hardware agree that a furnace, boiler or gas heating system needs an annual inspection. Aaron said to always check your flues and chimneys when cleaning boilers. Tonya suggests preparing for electrical outages by stocking up on flashlights, batteries, lamp oil, and gas for a generator, if you have one, which is something she definitely recommends for winter.

Speaking of annual inspections, The Mad Hatter’s owner, Flynn, explained that although they service year-round, most people try to have this vital, safety maintenance done prior to winter. “We try to get people to do it before winter arrives. Besides getting the advantage of our off-season discount, it’s also a safety issue—and chimney maintenance will protect your furnace or stove as they’ll no longer work once blocked from build-up.” Flynn explained that chimney blockage can lead to a major blow-back of soot and creosote into a home’s interior, which is a much more expensive and tedious process.

When it comes to a more invisible type of pollution homeowners can prevent, Sue at Sanitall said, “Indoor pollution is worse in the winter months. Houses are bottled up with closed windows making a perfect environment for dust mites, pet dander, and mold due to a lack of air circulation and heat.” The use of a super heated dry steam vapor system that’s used in hospitals, schools and other industrial applications is the “greenest” way to kill and remove indoor pollutants and bacteria with no toxic chemicals or Volatile Organic Compound (VOC) off-gassing. And their use of HEPA vacuums pick up microns invisible to the eye.

An ounce of prevention is definitely worth a pound of cure when it comes to discovering if a home’s electrical and mechanical systems, roofs, boilers, and many other parts that make your house a home are working correctly or starting to fail. Using the latest infrared imaging technology, problems in efficiency can be identified for a wide range of applications, including detection of moisture. Eric at Thermal FootPrint, which is an impartial, third party consultant, said, “We’re certified infrared thermographers and because we do not perform repairs you’ll get an unbiased straightforward report.”

Danger! Eliminating the hazard of slipping on snow and ice or embedding your car in a mound of snow is a topic Kim Williams of Williams Lumber and Home Centers spoke about. “Keeping your walkways and driveway clear of new fallen snow is a great way to prevent injury. Use salt to prevent ice build-up and make sure the salt you use is appropriate for the surface being cleared.” Williams said when it comes to expediency and convenience a snowblower is great.

Whether you go with the blower or an ergonomic back-saver snow shovel that Gary at Agway recommends, it’s prudent to start snow removal as soon as possible for safety issues. Gary said not to let your gutters freeze up to reduce damage to roofs, gutters or sidewalks where the drain spout is located. He recommended the use of urea, an organic nitrogen product that not only melts the ice in the gutters, it protects blacktop, shingles and cement. And it’s better than rock salt he explained. However there are cases where some type of salt is essential and A&M Hardware’s Tonya gave tips on which salt is best for what purpose and surface. “Rock salt is good for driveways and walkways up to about 5-degrees below zero.” However, she said it’s not safe for concrete; needs the sun to be really effective; and dries-out and cracks precious pet paws. Tonya advises the use of Magnesium Chloride, packaged as Safe Step, as it’s the best thing for pet paws; good for all surfaces; doesn’t need the sun to work; and is effective up to 15-degrees below zero. Another recommendation is Calcium Chloride flakes or pellets. It’s safe on all surfaces including wood, concrete and greenery; doesn’t need the sun for results; and is effective up to 25-degrees below zero. It’s also okay for pet paws, but not as safe as Safe Step. 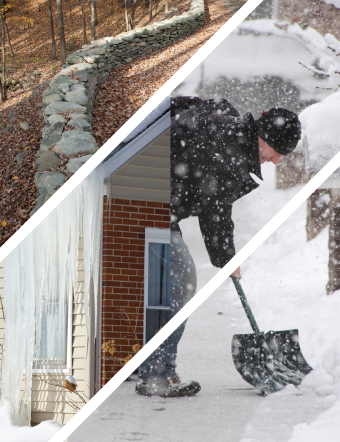 When it comes to “ice dams,” Herzogs’ Paul Gallo explained what this term actually means. “Ice dams are any build-up of ice that occurs in eaves or corners on the cooler side of the house.” This build-up can be very destructive as the ice lifts up shingles, making soffits and the interior of the home vulnerable to leakage. He added, “It’s very important to remove the roof snow about two to three feet up from the gutter with a roof rake. This implement is invaluable as it extends and eliminates the need to over-reach or stand on a ladder in the snow.” Another beneficial remedy that Gallo proposes is the gutter cable, which is a heat-producing cable that comes in various sizes. They plug into exterior, grounded outlets and are thermostatically controlled. “You just turn the cable on before the snow arrives or while snowing and they’ll melt the snow so it doesn’t turn into ice—as it won’t melt ice once it’s formed.” He advised to have this preventative measure installed by a professional before the first snowstorm.

Steve at S.A.P. Exteriors also had some winter roof precautions: “People can save their roof by not going up on ladders and chopping-up ice with axes and hammers. They may not even know it, but come springtime after the thaw, and after they’ve had their kids chop away, they may find there’s a leak from a hole in the roof made by chopping. I see that a lot.” However, Steve said many people call to take care of snow and/or ice removal or damage on their roofs during winter. “We’re insured; we know what we’re doing; and it’s safer for the homeowner.” But when it comes to the greatest prevention of all—he said the best way to prevent any roof damage is to have a tin roof installed as you’ll never have any snow or ice problems again.

Heritage Energy’s marketing coordinator, Kiley, explained that besides getting on a payment plan to relieve some of the burden of the rising cost of oil, which is out of the company’s control, it’s also a good idea to have a contract with your fuel company and an annual inspection of your mechanicals. However, what she thinks is the most important issue during winter that homeowners should address is to make sure driveways are clear so deliveries can be made safely and there’s a path to the fill. “If you know you have a bad driveway and there’s a delivery and storm approaching—call and give our drivers a heads-up,” Kiley advised.

Preparing For a Warm Home