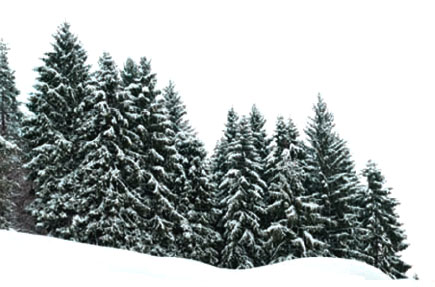 When other trees, bushes, and crops die or hibernate for the winter, evergreen trees remain green. It’s no wonder they are used at this time of year to symbolize life. A great family tradition can be started by buying living balled trees and planting them each year—a grove of holiday memories.

Found throughout the Canadian Maritimes and remote parts of northern New England, the fir was the first plantation-grown Christmas tree in the Northeast. Its soft, dark green foliage with flattened needles about three-quarters of an inch in length has a distinctive “balsam” aroma. Its sturdy branches and excellent needle retention have made it a longtime favorite Christmas tree.

First studied by Scottish botanist David Douglas in the 1820s, this conifer is widely distributed throughout western North America, from the interior lake country of British Columbia to the mountains of Mexico. Found in the central Rockies, the hardy “blue” strain is widely used as a Christmas tree in the Northeast. Its lush, blue-green foliage with needles about one inch in length is very attractive. Its sturdy branching and outstanding needle retention make this evergreen a holiday favorite.

This tree is a genetic variation of the traditional Balsam fir and is native to West Virginia, Pennsylvania, and New York. It can also be found in remote stands—its range extends as far north as Sheet Harbour, Nova Scotia. Although similar in appearance to the traditional variety, its needles tend to be longer, about one inch in length, and vary more in color. Its foliage, however, can often retain the bottle brush appearance of Fraser fir, its southern counterpart. Relatively new to the Christmas tree industry, its popularity continues to rise.

Found throughout the central Rockies, this spruce borrows its name from the Centennial State and has stout, three-sided needles about three-quarters of an inch in length. Its foliage can vary in color from dark green to indigo blue, as pictured. Its sturdy branching and good needle retention make it a desirable Christmas tree while its excellent form and outstanding color make it the premier ornamental evergreen.

Also known as “Southern Balsam,” this stately fir, native to the Great Smokey Mountains of western North Carolina and eastern Tennessee, is closely related to its northern counterpart. Its soft, emerald green needles, with silvery undersides, are about three-quarters of an inch in length. Its bottle brush texture, sturdy branching, and outstanding needle retention make it a superb Christmas tree whose popularity has grown rapidly in recent years.

Spanning the entire width of North America, this spruce is a decidedly Northland tree found throughout the lake-studded Canadian Shield and northern United States. Its delicate, blue-green foliage with needles about one-half inch in length is very appealing. Given proper care, this tree also exhibits good needle retention and can be found most often in a choose-and- harvest plantation. Its excellent form and color make it an exceptional Christmas tree.

Native to the great Baltic conifer forest of northern Europe, this tree has shiny, dark green foliage with needles about one-half inch in length. Often found at a choose-and-harvest plantation, the rich foliage of this spruce can exhibit good needle retention with proper care. Its value as an ornamental landscape tree is also widely recognized. 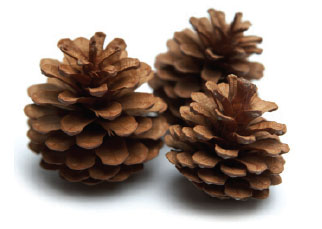 Different species of pine trees dispense their seeds in different ways. With the white pine, the seeds are dropped from the cone in late summer of the second year after fertilization. The cone drops to the ground shortly after. Some pinecones open naturally while others may remain on the tree for ten or more years, waiting to be exposed to the intense heat that only fires bring.

Pinecones are a natural choice for country or cabin decor as well as for holiday decorations. Here are a few tips to follow: After collecting the cones, lay them out on foil over a cookie sheet and bake for about 45 minutes in a low-temperature oven (about 200Ñ‹). This allows the sap to dry, the seeds to fall out, and it will kill any insects living inside the pinecones. After they have cooled you are ready to use them in a special decoration or craft.

THE GARDEN: MADE IN THE SHADE

If Gardens Could Talk