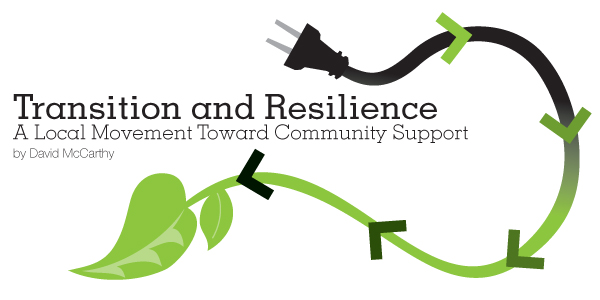 We have a choice, I suppose, about the looming mega-issues of our times. It may be tempting to give in to feeling powerless or to merely disassociate from the really big stuff. You know: stuff like climate change, the future of energy, and social fragmentation. And then if you do want to do something...well, what? Do you have that nagging feeling that changing your light bulbs just isn’t going to cut it?

The Transition Movement is a refreshing and engaging social movement that is growing by leaps and bounds here in the Hudson Valley. It is designed to address these tough issues by building communities that will consciously change and even thrive under changing conditions down the road. The basic idea is that people connect on a local level and build community while developing projects and skills that will help make the transition to a post-fossil fueled world.Transition groups are now meeting in Kingston, New Paltz, Marbletown, Woodstock, and Saugerties. The Marbletown Group (transitionmarbletown.org) was recently formally established as the 108th Transition Initiative in the United States. There are now over a thousand groups worldwide.

As environmental/social movements go, the Transition work is fairly recent, starting around 2004, but it is deeply grounded in older (and ongoing) work such as sustainability, and especially permaculture. The cofounder and most visible leader of the Transition Movement (which downplays hierarchy by design) is an Englishman named Rob Hopkins. His TED Talk called Transition to a World without Oil is well worth watching on YouTube, and he’s written widely on the subject. Hopkins has stated that his ideas started flowing when he tried to apply the principles he had learned in the study of permaculture, which is grounded in agriculture and care of the land, to broader concerns about economic activity, especially energy use. An “Energy Descent Action Plan” that was developed in a course he was teaching in Kinsale, Ireland evolved into an actual course of action when it was adopted by the Kinsale Town Council as a roadmap for transition to a sustainable future for the town.

The Transition Movement emphasizes the notion of building resilience, which is the inherent quality of natural systems—including human social systems—to adapt and respond to challenges. What does that look like in practice? It starts with conscious community building, using our natural human solidarity as a fundamental value. Then with a flexible framework and progression, the groups develop projects to put solutions into place. All along the way, it is very much about meeting new people—and yes, having fun.

In many ways, the Transition Movement is an active middle path between the extremes of doom and gloom on the one hand, and complacency and denial on the other. It is an antidote to future shock by consciously anticipating the kinds of changes we can reasonably expect, such as the effects of climate change. And, it encourages the resourcefulness and cooperation we are going to need to find our way to a more environmentally responsible way of life, starting right in our own neighborhoods.

Spa Rejuvenation in the Winter