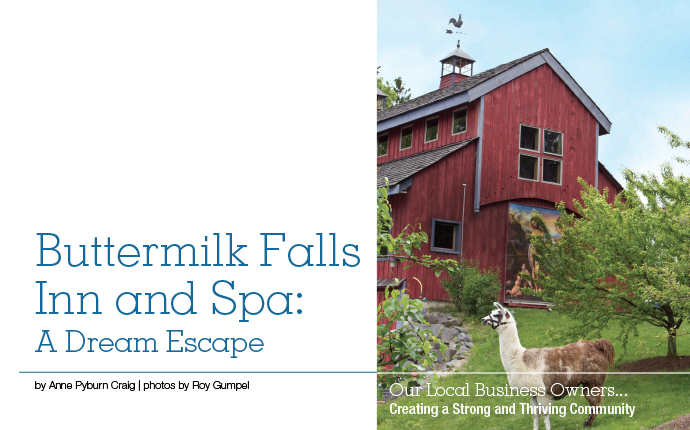 Unless you live in Milton and understand its gentle beauty, you just might just drive by this gem of a town and not notice some of its secrets, such as peach orchards, vineyards and wineries, and magnificent river views. But now that Robert Pollock has opened the Buttermilk Falls Inn and Spa, more and more people are making Milton their destination.

The Kennedy kids decided to collaborate in 1982, when their father lost his job, and formed a company distributing industrial safety products. From there, Kenco grew organically by popular demand.“We didn’t have a store; we were traveling around to different factories,” remembers Bill Kennedy. “We were constantly asked for outer work clothes and footwear. We had a mail order business, and people would show up at our house to buy things at all hours. We had inventory stashed everywhere. We were bringing people into the living room and selling them gloves.”

Buttermilk Falls is a visitor’s dream of a Hudson Valley experience. The inn is an 18th-century treasure, beautifully restored and sited on a 75-acre estate with panoramic Hudson River views, and that in itself would be enough to make lots of people happy. But proprietor Robert Pollock didn’t stop anywhere near there. A state-of-the-art solar/geothermal spa experience, in itself, might well have also drawn a following—but Pollock hasn’t stopped there either. And food for the inn’s kitchen and its affiliated restaurant being locally and sustainably sourced would have brought nods of approval; Pollock maintains Millstone Farm, with an organic kitchen garden, fruit trees, and heritage chickens producing breakfast eggs, on-site. Enough, you say, to cause a stir? Wait, there’s more. Millstone Farm is populated not just by chickens but by peacocks, llamas, miniature donkeys, angora goats and a herd of rescued alpacas. That’s right, rescued alpacas. Oh, and the place is pet- and kid-friendly.

Somewhat ironically, Pollock was drawn to Milton by the sleepy isolation of the place. Like many who come to visit the Hudson Valley, he fell in love and dreamed of making it his home, and his success in the competitive world of downstate real estate made that dream attainable. He tried Cornwall for a few years, but it was a bit too crowded. Then, in Milton, he discovered his dream incarnate, complete with exceptional natural beauty waterfall views. And when the neighboring property came up for sale, he did what many a country dweller has longed to do and bought it himself, ensuring that it would not become a subdivision.

But this wasn’t just any random tract of land next door. It contained a vintage inn, and one of Pollock’s passions just happens to be hospitality. It only took three years for a friend to talk him into reinventing Buttermilk, and the inn and spa opened in 2004. “I do realize the contradiction,” he says. “I purchased the property to keep strangers away, but now I happily welcome 54 guests at a time. Interesting how things work out.”

Indeed it is—but this twist of fate may have been inevitable, given that Pollock is plainly a people person. “I knew from the beginning that we wanted our spa and restaurant to be available for the local community, as well as guests staying at the inn,” he says. “Our spa was originally housed in one of our carriage houses. As the local business began to grow, we quickly saw the appeal to the local market for a high-end day spa, something that could offer a truly unique experience. Our million-dollar, state-of-the-art, eco-friendly spa opened its doors in 2006. We then realized that we could incorporate a unique dining appeal with our on-property farm and opened Henry's at the Farm in January of 2011.”

General manager C.J. Hartwell oversees day-to-day operations and sets a tone that somehow blends regal and down-to-earth, whether the occasion is a wedding being covered in the society pages or a day spa “staycation” for some office folks from Wappingers Falls. On page after page of online reviews, you’ll find CJ joyful about the raves, and it’s clear that Pollock’s vision of “a beautiful location, close to nature, with sustainable practices but with all of the amenities a metropolitan guest would enjoy” is in good hands.

Indoor-event space for catered extravaganzas in the newly renovated barn is the newest wrinkle at the inn, but Pollock is nowhere near done, saying that further improvements to the spa are in the works. “Our latest endeavor is a state-of-the-art bakery and cafe,” he says. “Construction is almost complete, and Frida's Bakery should open its doors sometime this summer."

Meanwhile, why not stop by for a Sunday brunch or one of the many events and celebrations CJ’s got planned—and a stroll among the peacocks and rescued alpacas?