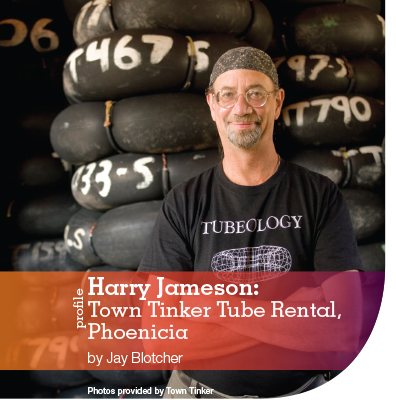 There are certainly more dangerous ways to enjoy yourself in this world. Thrill junkies might prefer bungee jumping off a bridge or ziplining over a canyon. But whitewater tubing down the Esopus River combines a tour of local nature with just the right amount of adrenaline.

Now in its 34th season, Town Tinker Tube in Phoenicia is a Mid-Hudson Valley tradition and a must stop for first-time summer visitors to the area.

Owner Harry Jameson is a lifetime Phoenicia local, and he fondly recalls memories of childhood summers spent tubing. “We would grab our tubes, fishing poles, and provisions and have somebody drive us up to where we started in Shandaken,” he recalled.

“We would spend all day on the river, tubing & fishing, and end up in Boiceville sunburnt, tired, and ready for a ride back home.”

Jameson had aspirations other than running a tubing operation as a boy. Being a draftsman was a favorite one. However, that dream ended when he had a field trip to IBM and he saw “a lot of people sitting under florescent lights that looked like they hadn’t seen the sun for years. Very scary!” He decided that an office job was not for him. But there were numerous career paths still ahead: fan builder, Navy operator of jet fighter flight simulators, and finally field engineer for an aeronautics company. However, Jameson soon wearied of the corporate world.

“I decided to hang up my suit and tie and move back to the Catskills.”

Casting about for his next career, Jameson recalled his tubing childhood. He began investigating the feasibility of his own operation. It was 1980, and he was 26. He gathered nearly 200 old inner tubes from Ulster County junkyards and dumps and bought an old barn in Phoenicia to serve as his headquarters.

“I made a sign that said, ‘We Rent Tubes,’ and the Town Tinker Tube was born.”

If Jameson had any doubts about his fledgling business, they were soon dispelled. His first year in business saw rentals of 1,000 tubes. (An all-day tube rental was $3.) The second year, he bought a billboard and radio advertising. Sales shot up 400 percent. Eventually, amenities were added, such as life jackets, wetsuits, helmets and transportation by a fleet of retired school buses redubbed Town Tinker Tube Taxis. 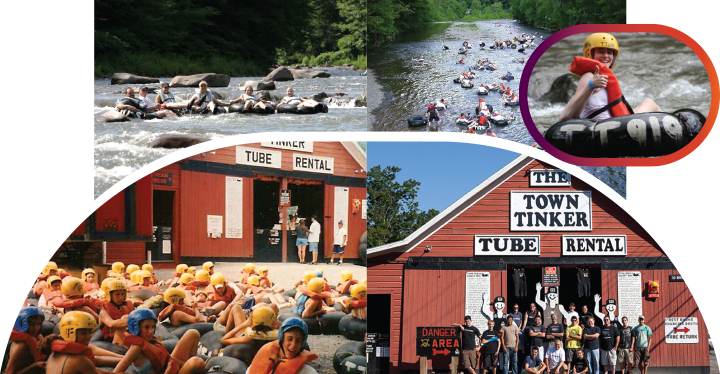 The third year, the New York Times introduced the world to Esopus tubing. Sales jumped to 12,000 rentals. Jameson was suddenly in competition with six other businesses.

The Esopus was clogged with tubers and townspeople began complaining about the chaos in their once-sleepy town. However, a tubing committee was formed — with Jameson at the helm — and issues were resolved.

Harry Jameson has brought innovations to the tubing tradition. A new inner tube model featuring seats was created in 1987 for a very pragmatic reason: “The seat offered much-needed protection for the rear end from the rocks in the Esopus.”

By this time, tubing became a pastime beyond the initial demographic of fun-loving teens and young adults, nature lovers, and stoners.

Jameson was renting to scouting troops and families. And he had survived the flood of “copycat competitors” drawn by the Times frenzy.

While fun is the priority, safety is equally important. Jameson personally trains all staff and makes sure that they pay special attention to newbies who don’t realize the turbulent power of the Esopus River.

Jameson, an unabashedly cerebral man, cites Buddhism as the philosophy that guides his tubing operation. “It’s all about the Zen and going with the flow. One year my whole marketing campaign was based on just that. I experimented in my tube rides over the previous year by letting the Esopus take me through the channels and rapids, rather than trying to steer my way, to see what happened. I found that the Esopus, being millions of years old, is much wiser than the young grasshopper.”

Ultimately, tubing king Harry Jameson sees himself as an entertainer. “I gear them up with their tubes, life vests, wetsuits and helmets, give them a safety briefing, take them for a bus ride, and two hours later they are back in Phoenicia happier then when they started.

"A job that makes people happy is a great one to have.”

Pizza Bliss at a slice of italy, kingston