So Much More Than a Camp 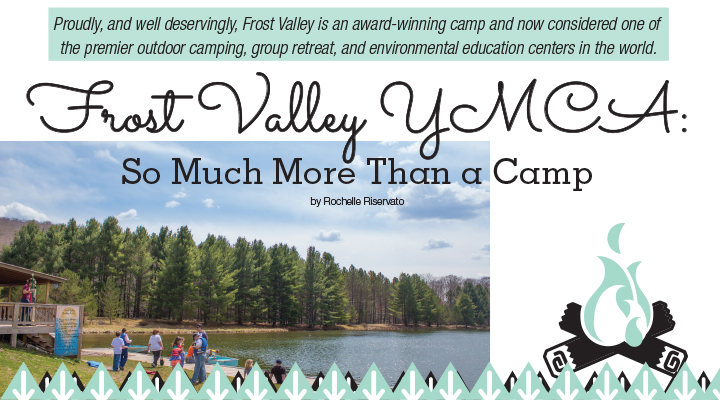 Frost Valley YMCA provides a warmhearted, bountiful atmosphere…certainly not what the word “frost” may bring to mind. In fact, it’s just the opposite, offering a warm and compassionate atmosphere for thousands of children and families throughout the tri-state area.

The Frost Valley YMCA, as with all YMCAs, has built its reputation by putting Judeo-Christian principles into practice through offering programs that build healthy spirit, mind, and body, providing folks of all ages and abilities with enriching, even life-altering, outdoor experiences. Frost Valley delivers year-round access to programs for kids and adults alike — overnight and day camps, retreats, conferences, environmental education, day care for children from the Catskill’s tri-county local community, and even an outdoor sporting program for hunting season.

According to Edward Jenkins, director of marketing and communications, “Foundationally, Frost Valley’s different programs run 362 days a year, with nine weeks of that being our summer camping programs. We serve over 30,000-40,000 kids and their families per year—3,500 at our summer camps; 16,000 in our educational programs; and another 16,000 at conferences and church, business, and family retreats.”

Jenkins also explains that Frost Valley offers three-day field trips for kids from NYC and New Jersey, which he said is the camp’s primary audience. The camp’s staff is comprised of enthusiastic outdoor environmental educators from all over the world, who inspire and build unique programs that blend the wonders of the outdoors with experiential learning.

Jenkins, with five years of experience working at different YMCA camps, says, “My background in psychology and communications allows me to work hands-on with the kids and gives me an understanding of what the parents are looking for when they’re sending their most precious possessions, their children, for one to four weeks during the summer. It’s hard for parents to let someone else steward and take care of their children, but their fears are allayed when their children, hopefully, return a little better in many ways than when they first came.”

Frost Valley’s annual hallmark family event in August is designed to give children a summer camp experience, but with the entire family. “Coming up as a family takes away any trepidation parents may have for sending their children away; they learn to understand on a first-hand basis just what a wonderful place it is,” says Jenkins.

Frost Valley is not without national and worldwide recognition: In February 2013 Frost Valley YMCA received the Eleanor P. Eells award, which is the American Camp Association’s highest honor of distinction. A November 2012 press release cited this award stating: “Frost Valley's organizational commitment to its entire community is a cornerstone of its selection for the award. From the inception of the Ruth Gottscho Dialysis and Children’s Kidney Program in 1975, the nation’s first program to offer children with kidney disease an overnight camping experience, to the launch of East Valley Ranch, a girls-only equestrian summer camp experience, Frost Valley's commitment to serve through camping has been a pillar of the camping world.”

Jenkins explains with pride, “It was an honor receiving this award from the American Camping Organization, as they are the accredited organization for all camping, whether YMCA or non-YMCA, in the United States. It is a lifetime achievement award for Excellence in Programming.”

The second recent award was the North American YMCA Development Organization (NAYDO) Eagle Award bestowed upon Frost Valley in April 2013. This distinction is a prestigious Lifetime Achievement award honoring YMCAs who have been exemplary in their philanthropic endeavors. According to a press release, Frost Valley was nominated for the Eagle Award by Camp Manito-wish YMCA. Director of Development and Alumni Relations, Ellie Orbison, wrote: “It is my pleasure to nominate Frost Valley YMCA for the 2013 Eagle Award. Frost Valley exemplifies quality financial development practices and is lifted up as the leader in the YMCA camping movement as the model we should all be following to achieve success.” Jenkins comments, “It’s for both philanthropic awareness and the way those dollars are used, which is one of the highest honors any organization can receive.”

And it’s no wonder Frost Valley is recognized for its philanthropy upon discovering their service to so many of the families tragically affected by Hurricane Sandy. So what did Frost Valley do? They went “dark” on all advertisements and activities from October 2012 to the end of the year and concentrated on providing free weekend respites for those impacted in the metro areas. Jenkins explains, “Although we weren’t hit hard, after Hurricane Sandy the phone started ringing, and we learned that many of the people we serve were the ones hit. Being a non-profit organization and to show how much we love what we do, in late October we cleared all our advertisements off the Internet and newspapers, cleared our schedules, and virtually went dark for the remainder of the year.”

A week after the hurricane, the free program was launched. Frost Valley welcomed hurricane victims to the camp for weekends of free food and board, giving those impacted by the disaster some space away from what they were experiencing back home. “We wanted to give people a respite from what they were dealing with down there and we did this for six weekends,” says Jenkins, adding, “We also had a Thanksgiving Celebration and said ‘if you can’t have Thanksgiving down there, we’ll give you one.’” During this time, Frost Valley served over 100 families. And it didn’t go unnoticed, for when the camp’s “Volunteers Work Weekend” took place, many of those same “Sandy” families came up to show their gratitude for what was given to them during their time of need.

Frost Valley’s benevolence is practically endless. They have a “Heart in the Valley” program for children with heart transplants, as well as a camp for children undergoing kidney dialysis; these camps are complete with both Frost Valley’s own year-round medical staff and additional physicians working through a partnership with the Children’s Hospital at Montefiore and a few other organizations. Jenkins says, “We’re the first camp in the country to offer a kidney camp program for kids on dialysis in order for them to have a mainstream camping experience.”

In addition, Frost Valley’s hallmark partnership is with the Young Adult Institute in New York, called Mainstreaming at Camp (MAC) where campers with developmental disabilities are brought in and mainstreamed with regular campers without disabilities. “It’s a great experience for both sets of campers,” cited Jenkins. “It helps them to humanize something they may not understand.” 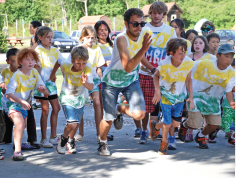 One thing really stands out about Frost Valley — and that’s the concern for the people rather than revenue.

For example, the camp incurred an expense of $400,000 providing free weekends for victims of Hurricane Sandy. Jenkins comments,“That’s the great thing about this place, as a lot of CEOs would have said do whatever you can to make up that money, but our CEO said ‘pull-it—we’re a complete mission for the rest of the year—don’t worry about the cost, just do it.’”

Frost Valley is, undeniably, an organization that relates to and respects humankind. It’s obvious that they don’t only try to instill the core values of “Caring, Community, Diversity, Honesty, Inclusiveness, Respect, Responsibility and Stewardship” to those who come to the camp, but they also follow the values they teach in a most exemplary way.

The Gift of Giving