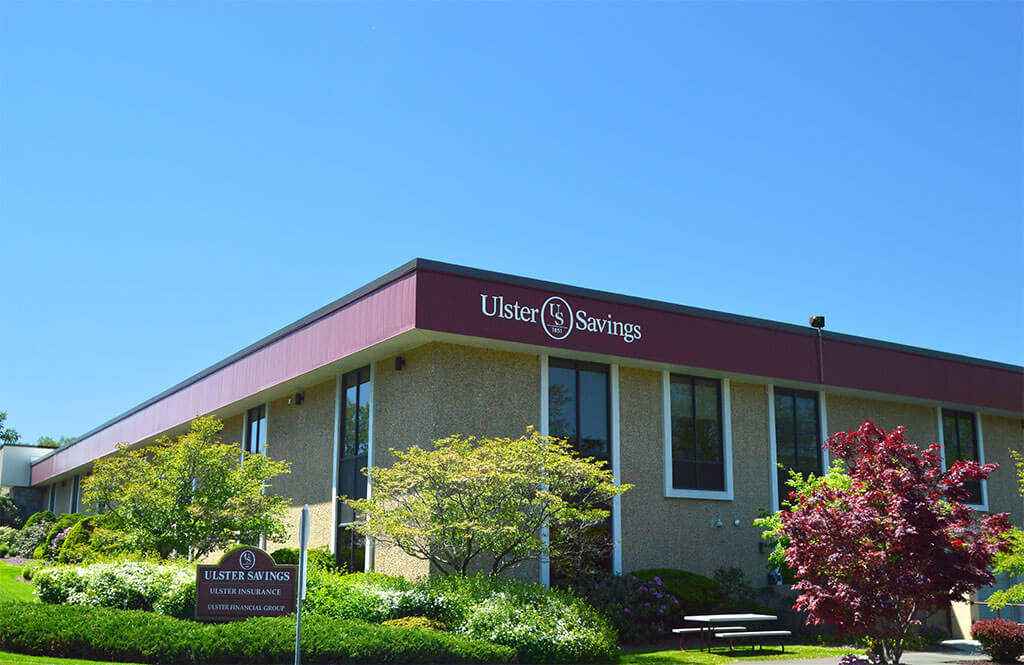 Not all those Paycheck Protection dollars were snatched up by the already wealthy. In the Hudson Valley, Ulster Savings Bank helped save over 3,000 local jobs, processing over $35 million in loans. The smallest loan amount was just $300, and 52% of the loans were for $30,000 or less. Only 3% were above $350,000. If Main Street will have a shot anywhere, it’s in places like this, with community-minded bankers devoted to pulling out all the stops to keep the wheels turning. 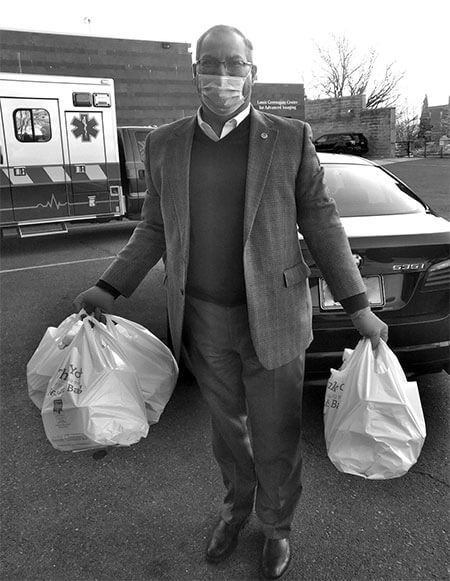 “We have no shareholders. The community is the shareholders. So we pay a good part of our profit back out, no matter what is going on.”
–Bill Calderara, President and CEO

In addition,Ulster Savings has also donated $324,000 to local nonprofits. “We wanted to get money into the community immediately, so we proactively granted funds to food pantries and essential services. And we know who would normally be having a fundraiser and had to cancel,” says bank president and CEO Bill Calderara. “We’re a mutual savings bank, and this is what we were founded to do. We have no shareholders. The community is the shareholders. So we pay a good part of our profit back out, no matter what is going on. We have very strong risk management, so we’re financially very strong—but I think the single most important factor in our resilience is that mutual bank DNA.”

In January 2020, as the emergency loomed, Ulster Savings was already mobilizing. “We didn’t want to believe it, but we’ve been around through three depressions, 28 recessions, and more recently Ebola and bird flu,” says Bill. “We had a pandemic plan. We pulled it out and went over it, started pre-ordering things like cleaning supplies and personal protective equipment. We were still hoping we didn’t need it, but as it turned out, we never came close to running out.”

“We have a strong set of core values: We are here to be a major driver of positive change. We can change the trajectories of people’s lives. We believe in having the customer’s back.”
–Bill Calderara, President and CEO

An updated pandemic plan was presented to the bank’s board in February. Onsite staffing would be reallocated, with employees rotating in and out, and the IT group would work through the night, deploying enhanced computing capability to home offices “at hyperspeed,” Bill says.

Deep cleaning and disinfecting were ramped way up. Not a single job lost in the process!

But beyond the internal precautions, the bank’s leadership thought deeply about what customers’ lives would look like and how to help. Some of the results: ATM, overdraft, and a long list of other fees have been waived for the duration, cash and transaction limits lifted.

“Rather than waiting for your deposit to come through the Federal Reserve, we monitor them and as soon as we see funds available we pull them down, “says Bill. “It means people get their checks two or three days earlier, in return for a little work on our end.” “It’s so very cool when a local savings bank gets all George Bailey in a time of hardship. 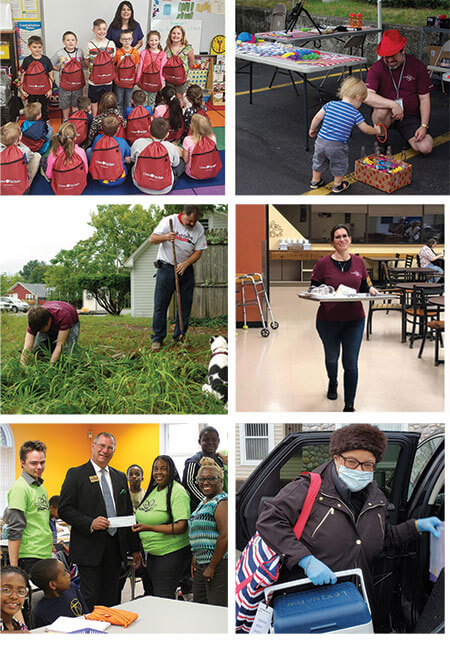 Right on, @ulstersavings!” tweeted an admirer in mid-March. Very cool it is, but Bill says those tendencies, reminiscent of the humble hero George Bailey from It’s a Wonderful Life, have been woven into the bank’s DNA over 169 years, pandemic or no pandemic. “Our founders put up their own capital to start a bank to help the community, with no expectations,” he says. “We have a strong set of core values: We are here to be a major driver of positive change. We can change the trajectories of people’s lives. We believe in having the customer’s back. We pull together to get things done, and we believe in creating a workplace we can all brag about. That’s not on the website; it’s not a marketing piece. It’s our center, and as decisions arise, it’s our guide.”

“Rather than waiting for your deposit to come through the Federal Reserve, we monitor them and as soon as we see funds available we pull them down. It means people get their checks two or three days earlier, in return for a little work on our end.”
–Bill Calderara, President and CEO

Ulster Savings employees have donated well over 800 hours to nonprofits this year, while also pitching in to lend a hand in whatever department needed it most, and have access to payroll advances and interest-free loans. (Most haven’t needed them, says Bill, but they’re available just in case.)

The crew is also finding ways to lift each other’s spirits. “Friday is Jeans Day—we raise about ten thousand a year doing that,” says Bill. While the banking team normally adheres to a professional dress code, on Fridays they trade a $1 donation to a charity that’s chosen each month for the comfort of denim.

“So the half of the crew at home decided to mix it up and go formal business attire, while the half coming in to work...well, somewhere out there there is now a picture of me at my desk in a bathrobe.” 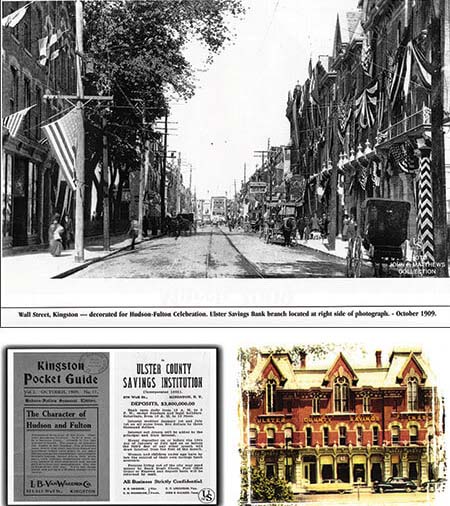 “We’re going to do everything we possibly can for our customers, our community, and our teammates, and keep making discoveries about what that looks like.”
–Bill Calderara, President and CEO

Branch offices remain open by appointment, but US has got ten inventive and pushed the envelope of socially distanced, safety-first transactions. “We’ve had to rethink all kinds of stuff,” says Bill. “Closing on a home loan, for example; many things can be done distantly, with electronic signatures and so forth, but for some things you need notarized signatures and witnesses. So we’ve created drive-through closings in a small circus tent. You don’t need to leave your car; attorneys in protective gear pass documents through the window and wave goodbye.”

They’re nowhere near done innovating, says Bill, nor will they ever be—whether it’s a collaboration with another business to shorten loan turnaround times, waiving ATM fees even for non-customers, or setting up “walk-through” banking at the Phoenicia branch, which lacks a drive-up window. “We’re going to do everything we possibly can for our customers, our community, and our teammates, and keep making discoveries about what that looks like,” says Bill. “The best advice I could give? If you’re in business and forced to close, use the time to go over your business plan with a truly open mind. It’s time to re-think, re-plan, and be ready to fit your services to people’s needs. For example, a caterer we work with changed to daily takeout meals. And if you’re an individual, it’s a great time to set up a sound budget. A lot of people improvise, but you need good clear information to make good decisions.” If you’re not sure where to begin, US offers 100 modules of financial literacy education free to all on their website, in both English and Spanish.

“Financial literacy is something we’re passionate about,” Bill says, adding that there’s a whole other operation offering online courses on the subject for students pre-K through 12, along with teacher training. “You need a solid foundation of understanding. And if you need individual consulting, we’re here—on the phone, online, on Zoom, by appointment. We’ve teamed up with a commercial lender and we’re offering weekly webinars on how small businesses can stay organized through the forgiveness phase of the PPP program. We want to help you simplify.” The community, says Bill, has been heart-wrenchingly grateful. “We get these notes at the drive-through daily, calling us heroes,” he says. “It’s so appreciated. It lifts us up. So yeah, we’re here, we’re doing fine, and we’d love to have you come and join us. That’s who we try to be. We’re US, and we’d love for you to be part of that.”