The Little Theatre that Could…

Shadowland Theatre has a very interesting history, transitioning from a 1920’s vaudeville venue and movie house to the only leading professional nonprofit Actors' Equity Company in the Hudson Valley.

With only 90 miles between its upstate Ellenville location and New York City, it’s been called the “Best Theatre” in Hudson Valley Magazine’s “Best in the Valley” award program in 2001, 2005, and 2007; the 2006 “Cultural Business of the Year” by Ulster Development Corporation and Ulster County Chamber of Commerce; “Best Theatre 2006” by the Times Herald Record; and “Best Drama of the Year” by The Daily Record in New Jersey for its production of The Good German. Shadowland is alive and strong, achieving its goals every season of enhancing, educating, and entertaining audiences.

With the onset of the Industrial Revolution, more and more of the population moved to towns and cities and worked regular jobs. This afforded them something they lacked back on the farm —extra money and leisure time. These luxuries fashioned a need for affordable amusement, and vaudeville filled the gap in an era when phonographs, film, radio, or television didn’t yet exist. Interestingly, according to Wikipedia, 19th century New York City entertainment was class-segregated with opera being for the upper and middle classes, minstrel shows and melodramas for the middle class, and variety shows only frequented by working class men and the lower middle class. When the May 10, 1849 Astor Place Riot presented a horrifying, deadly clash between the upper and lower classes, entrepreneurs developed vaudeville to seek profits from a much wider, class-melding audience, and Shadowland Theatre proved to be perfect for this form of entertainment.

The art deco-styled Shadowland opened on July 3, 1920. According to a 1920 issue of The American Contractor, an original description of the Shadowland’s building proposal stated:

Archive photos taken when construction was complete reveal a façade in a style common in the 1850’s and 1860’s. The 50- by 80-foot structure became the auditorium, which was built behind the existing older building that became the entrance.

In 1927, enrichment of the live shows came about with the installation of a Robert Morton theater pipe organ, which was a major enhancement to theaters exhibiting silent films. As sound cinema became more appealing, Shadowland presented films that are now classics to our modern-day movie aficionado. The Cinema Treasures’ website notes that a 1941 promotional film sponsored by Ellenville merchants was shown. Called Ellenville on Parade, this film urged residents to buy locally and support local merchants, much the same as a popular current-day initiative. 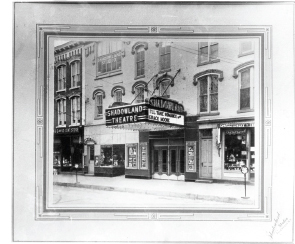 The Private Purchase of Shadowland:

After a grave destruction from a 1939 fire, Shadowland was rebuilt but shut down in 1980. In 1985, Robin Smith and husband Peter Casperson were seeking an upstate abode. Being actors, Smith and Casperson were asked by their the real estate agent if they were interested in buying a theater, which at that time was used for movie screening and owned by then-Ellenville Mayor Ed Jacobs, who was seeking a purchaser for his venue. Smith, Casperson, and members of the Actors’ Cooperative, along with teacher and founding artistic director Ron Marquette, set up a stock option plan to buy Shadowland.

And so it was done. Bought. And, the group breathed live theater back to the venue on July 3, 1985, with a black tie gala. Their first play was Light up the Sky, followed by Cat among the Pigeons, Trixie True Teen Detective, and Noel Coward's Private Lives, which completed their first 1940s-themed season.

One of the actors stated they would come off stage and serve ice cream to the audience from a little ice cream parlor. However, with the hectic and demanding lifestyle of being both actors and theater owners, the group eventually had enough of the frenzy and donated the theater back to the community.  And from there, the Shadowland Theatre continued to move forward.

Back to the present. Shadowland’s present and fourth Artistic Director, Brendon Burke, is now celebrating his tenth year in that position. He is largely responsible for Shadowland’s ever-successful mission to offer residents and visitors of the Valley a heaving anthology of professional theater with a mix of classics and contemporary plays at affordable prices. During the past few years, he’s also been instrumental in a magnificent multi-year makeover of the theater that has restored the elegant art deco building to its former glory—creating a tiered, 186-seat venue with clear sightlines of no more than 35 feet from the stage and state-of-the-art technologies with outstanding acoustics.

Additionally, this magnificent restoration has allowed the Equity Company to achieve and extend its multifaceted mission into a year-round operation. “Most of the donations for the capital campaign came from this community, and most of the work was done by Ulster County companies,” Burke said.

In addition, the theater has also acquired another 5,300-square foot building with a storefront, donated by a fan, which is being used for rehearsals and youth classes. According to Burke, “We are now focusing on taking this space and transforming it into a stage for just the children—it will be a 99-seat public venue specifically for children’s theater.”

Now entering its sixth year, The Young Actors Academy has witnessed continual growth from its first semester with only 16 students, and it now averages 50-60 students per semester. However, because the 2013 fall semester included productions — complete with costumes, props, lighting, sets, and sound effects — expenses increased, and the need for scholarships heightened. Benefactors had been found to sponsor three students per semester, but there is a need for up to eight scholarships per semester to fulfill the need of the students waiting for this opportunity. With a goal of introducing youngsters to theater at a young age, it is hoped that more scholarships can be set up to help sponsor children for each 10-week semester in 2014. Says Burke, "We have excellent relationships with the local junior and senior high schools and with SUNY New Paltz and SUNY Ulster." Burke believes the Young Actors Academy contributes not only to students’ appreciation of literature and the theater, but also to something more: “it improves their lives overall—they become better students and better individuals.” 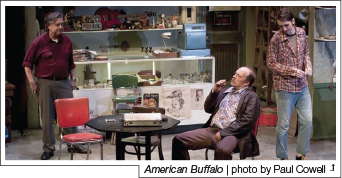 The 2014 Shadowland Season Begins with Return to Golden Days:

Burke comments, “It’s our 30th season, a remarkable achievement for a small theatre, and that’s due to the support of the community and our loyal audience.” His appreciation for the tremendous audience loyalty empowers him to continue producing and offering plays that are relevant, “affecting real people in our time with diversity for both theater enthusiasts and even non-theater folks. . . . but they must be performed with excellence.”

On February 22, a series of four “Matinee at The Shadowland” classic movie programs gave audiences, young and old, a chance to experience what attending a movie theater during the golden age of cinema was all about. In addition to a feature film, each Saturday matinee program featured original trailers, animated cartoons, a comedy or musical short subject, and a chapter from one of the great movie serials, Flash Gordon with Buster Crabbe.

Below is a list for upcoming 2014 spring and early summer shows. Please visit the Shadowland website for more information.

There are senior, student, and group discounts available, as well as "pay what you can" for all performances that are not sold out, which is part of the board's commitment to accessibility. Tickets may be obtained from the Shadowland Box Office, 157 Canal Street, Ellenville, by calling 845-647-5511, or by visiting shadowlandtheatre.org.

The Romance of Relocation Pt II