The Art of Loving Chickens

It never gets old. Finding the eggs each day is always a thrill. And finding is the key word here, because the hens rarely lay their eggs in their tidy little nest boxes.

The eggs are often strewn about the henhouse and pen—inside the wood chip bag, next to the waterer, under their walkway, or simply in the middle of the floor—waiting for us to pluck them up and fry them for breakfast. Or bake them into a quiche for lunch. Or whip them into a quick omelet for dinner. Sometimes we just place the eggs in a bowl on the kitchen counter and admire their colors: pale blue, speckled brown, cream.

There’s no need to refrigerate these gems. In Europe, fresh eggs remain on the kitchen counter until eaten; it’s only in America with our germ-a-phobic nature that we must refrigerate eggs.

In my house, there is definitely an answer to the age-old question, “What came first?” Why, the chickens, of course.

It was sort of a rash decision. My son asked if he could raise chicks for his 6th-grade science project, and I replied sure, why not? Off to Agway we drove and picked up 12 precious, fluffy chicks, along with a heat lamp and some food.

I didn’t quite understand the ramifications of this impetuous act until my husband arrived home from work, saying, “What the hell, Colleen! Where are they going to live?” Well, I hadn’t really thought about that. They were currently living in a cardboard box in my son’s room, and they were just so darn cute.

My son’s charm (and a lot of sweet talk from me) helped to win this battle, and my husband set out to build a chicken coop the following weekend. Hubby was sort of happy to use his pile of scrap wood for the foundation, and, for the roof, he salvaged leftover aluminum siding from our demolished above-ground pool. He barely even grumbled when he had to make a trip to the hardware store for new lumber for the sides of the coop; this henhouse wasn’t quite budgeted for, and wood is expensive! But the stench (yuck!) emanating from our son’s bedroom made sure the process went quickly.

Soon enough, the chicks moved into their spacious new home, and I found more chicks to buy! I needed, yes, needed, chickens that would lay blue eggs, just like Martha’s Stewart’s Araucana chickens. I found them via craigslist and conducted my first business venture with a 9-year-old 4H master. This turned out to be the first of many chicken business ventures, all of which have ended up costing us money. One would think that we would get some monetary return from the eggs, but, trust me, our precious eggs cost more per dozen than I dare allow myself to think. The food, the supplies, and the cost of replacing chickens all adds up. 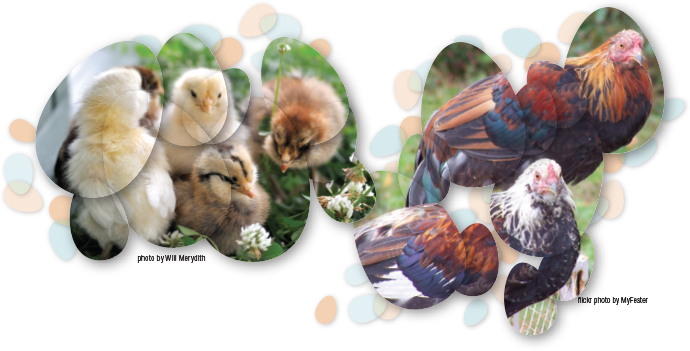 And, yes, the chickens do need to be replaced. Chickens sort of come and go in rural Ulster County. Our dog killed two of those original chicks, and we have lost others due to fishers, hawks, and raccoons. One chicken even froze to death. Plus we had to slaughter four roosters because they became absolutely vicious. This turned into practically a full-day affair, and the meat from these layers ended up being stringy and tough—hardly worth the emotional investment. I will stick with buying my chicken nicely packaged from the grocery store. Besides, we now have our own personal chicken “dealer” who will pick up unwanted roosters; we don’t really ask him what he does with them.

For now, we just enjoy the chickens we have. I never dreamed they would be so entertaining. We moved our old outdoor table and chairs right next to the coop so we can just watch them as we sip our morning tea. And by we, I mean my husband and me. My husband is as enamored with them as I am; he calls them his "girls," and he often reminds me about how they circle him when he goes anywhere near them. (They flock to me too, or anyone else who might be a source of food.) My son forgot about them as soon as he moved onto his next obsession, but he is still pretty good at catching baby chicks if necessary. 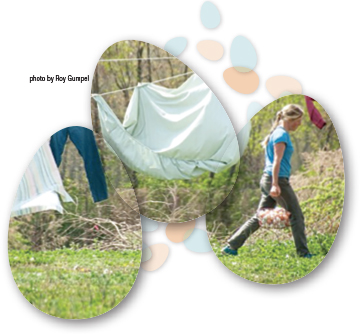 There have been waves of baby chicks since those original chicks warmed their way into our hearts. The first time it happened, one of our hens suddenly stopped coming into the henhouse at night. Odd, but chickens live by their own set of rules, so I didn’t think too much about it during these few weeks. Then one evening at dusk, I went out to close the henhouse and there she sat, right in the middle of the dirt pen. I gave her a gentle nudge toward the door of the henhouse and explained to her that, for her own safety, she needed to sleep inside at night. She responded with a quick movement to the left, and underneath her fat little body cheeped eight little babies. A miracle. She hoarded her eggs to become a mommy, and she taught me the meaning of what it really means to be a “mother hen.” Nothing was going to hurt her babies, and nothing did. We still have some of those babies, who, in turn, have given us more chicks.

Nature, so simple and yet so grounding, is at work in our henhouse. That’s our return, and it’s all so worth it.

Ways To Cozy Up Your Nest

Wake Up Call for THE GARDEN

HOW TO: Plant a Simple Garden