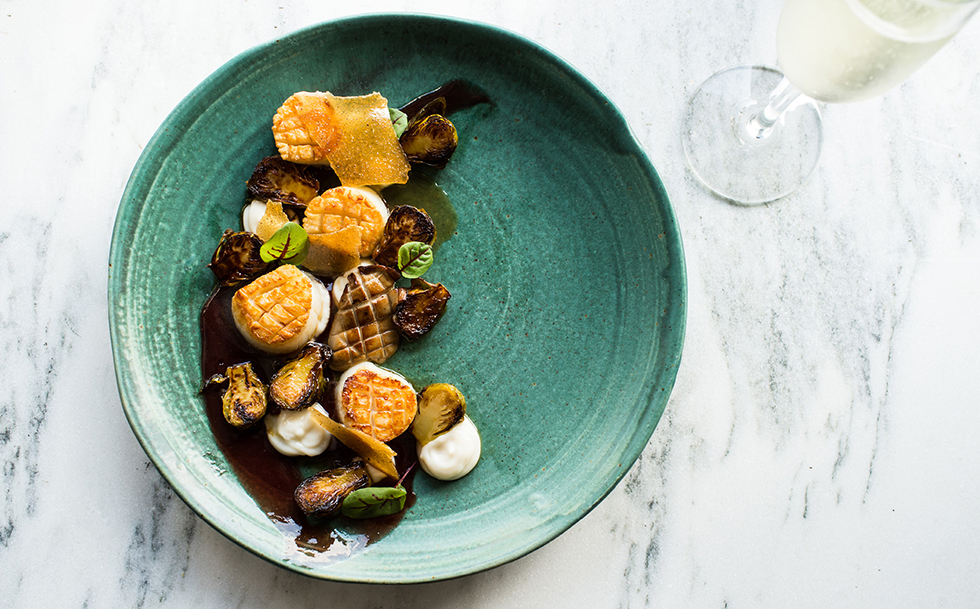 Standing out among the bistros and cafés of Uptown Kingston that specialize in regional cuisine, Redwood does not hide its modus operandi: This place is California.

Having opened in May 2016 at the site of the former Frogmore Tavern, Redwood reflects the cuisine and style of the Golden State. The food is a mix of global influences—Mexican, Japanese, and Argentinian among them—with inventive takes on fresh ingredients. The service is cheerful and laid-back with no fussiness about formal attire. And the space is cool and inviting with a sunny California feature: a roof deck.

The idea to open Redwood came from co-owner Kelly Jenkins Polston, who grew up in Kingston before departing for the University of California, Berkeley in 1989. She stayed out west after graduating, opening a fine-dining restaurant and a bar, and raising four sons with her husband Scott Polston.

When Kelly and her son visited Syracuse University in 2014 to explore options for his college education, she decided to swing by the old hometown. It was the first time she had been back to Kingston. Needless to say, she was shocked.

“It had grown so much, and it was so beautiful, and the weather was amazing,” says Kelly. She told Scott about it, so he took the other three boys on a trip to the Hudson Valley in 2015. And they liked it enough that the family bought a house in the Kingston area with the intention to flip it a year later; but, that didn’t happen. Their restaurant and bar back in California both sold, and, simultaneously, they heard that the Frogmore was for sale. 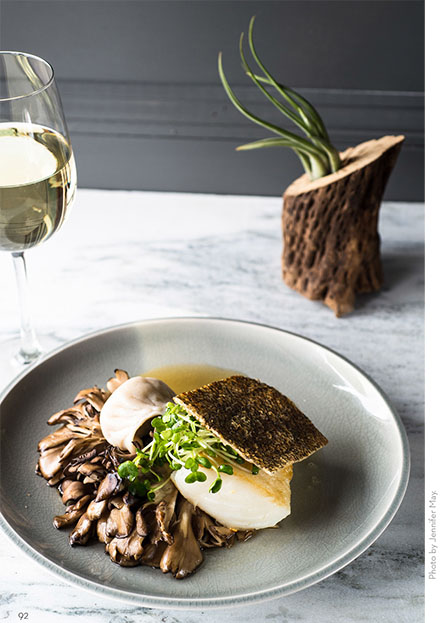 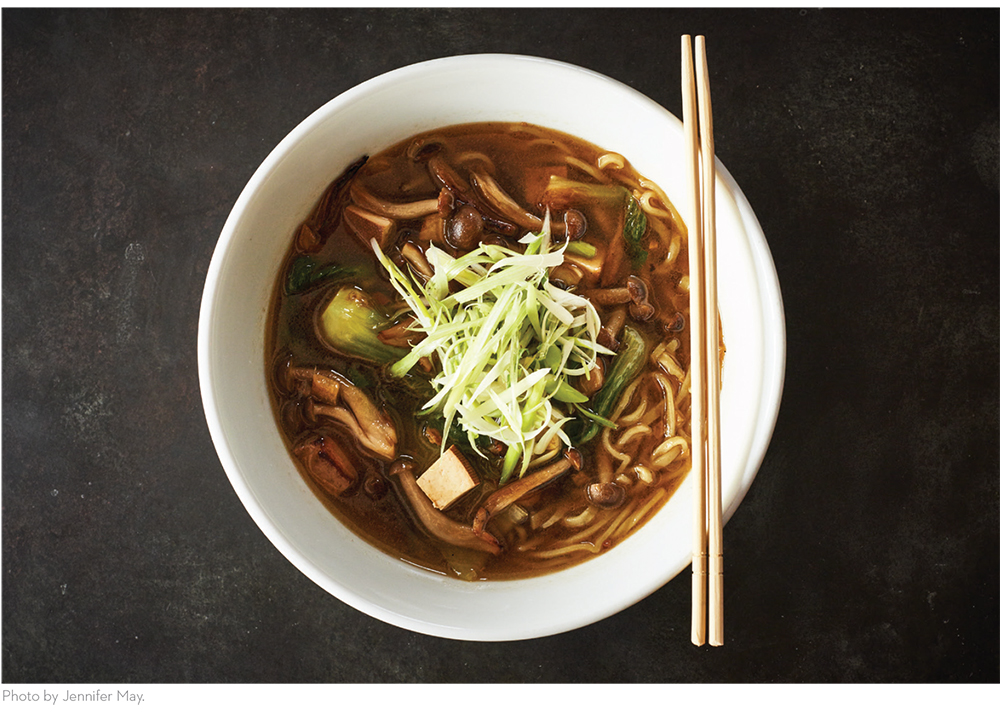 “We really believe that you can have fine-dining quality and execution and it can still be a fun and chill place.”—Kelly Jenkins Polston, co-owner

“It went very fast,” laughs Kelly. They closed the deal in March 2016 and immediately started a small renovation, taking out a wall and booths, adding a long banquette, making an open kitchen, and changing the color scheme to a soft blue and white, which enhanced the coolness of the dining room. They hired executive chef Sean Tompkins in April and opened the restaurant May 31.

“We have a handful of dedicated people working very hard, long hours,” says Kelly. “It’s a tight-knit little group in there.”

A year later, the group is fulfilling its mission: To serve modern, locally sourced food with a California flair.

The menu changes seasonally. Springtime entrées include chilled lobster with grilled peaches, pickled cherries, and a charred romaine mixed with a cherry vinaigrette and feta. Meats are adventurous: rabbit roasted in honey and lavender 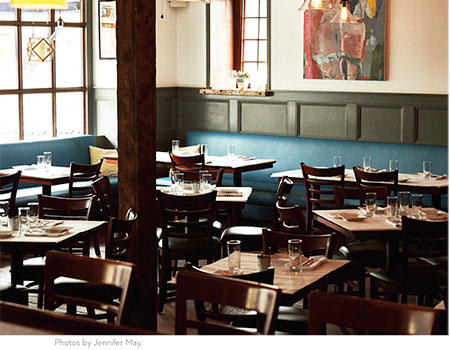 and wagyu beef served with chimichurri and yucca fries, combining Japanese and South American influences. California-inspired salads like the Sonoma—greens with pistachio praline, cherries, manchego cheese and a fume blanc vinaigrette —are bright and crisp.

Redwood makes everything in-house—except the table-service bread from Bread Alone—including its ramen noodles featured in its spicy vegetable and pork ramen dishes. Produce is sourced from various local farms and collectives, including Sky Farm in Millerton. Having ingredients mere miles away from the 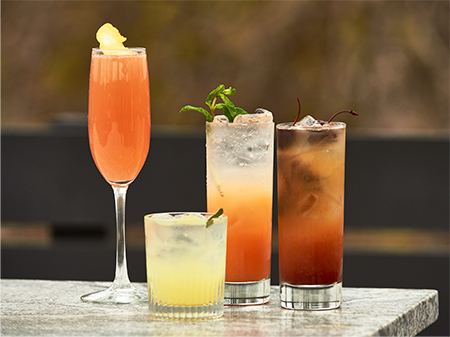 restaurant is something Kelly wasn’t used to in California. “It was hard to eat like that in California,” she says. “The farms are far away.”

The summer menu is likely to include lobster melon salad, which can be enjoyed on Redwood’s rather large and impressive roof deck, called Up-Top. With plenty of oversized shades to block direct sunlight, guests can comfortably dine on the deck, or they’re just as welcome to lounge with a drink. Choose from the 12 taps that feature both Kingston-made and West Coast beers (Keegan Ales, Firestone Walker, Lagunitas), or order one of Redwood’s 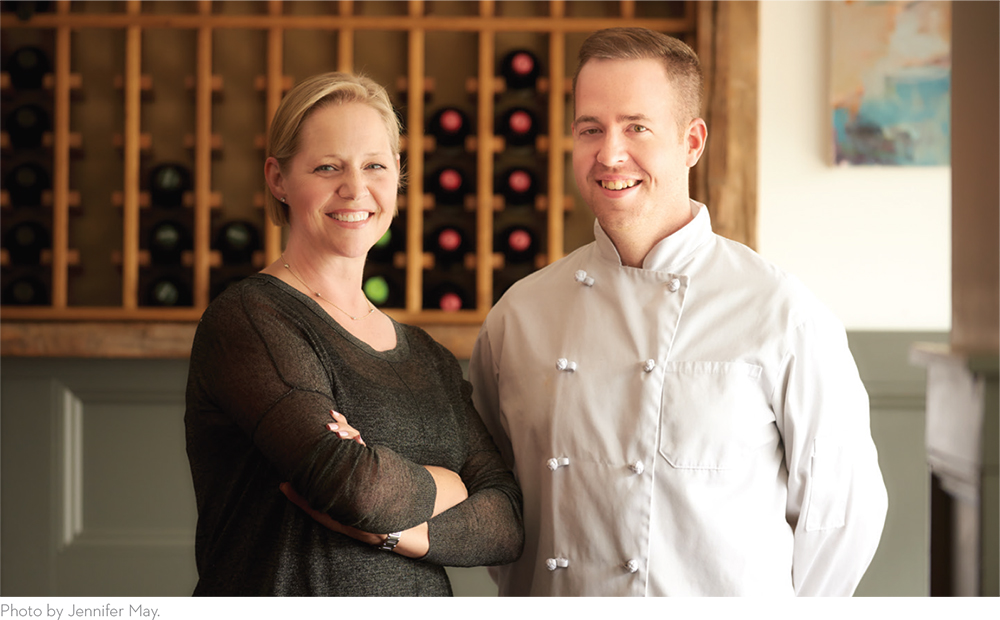 homemade cocktails, like One For Ernie, made with local Warwick Gin, prosecco, spiced cranberry syrup, and fresh lime. Then sit back and enjoy; seating at the Up-Top bar offers gorgeous sunset views, reminiscent of a Northern California winery or Southern California beach bar.

“We really believe that you can have fine-dining quality and execution and it can still be a fun and chill place,” says Kelly. Redwood also serves brunch starting at 10am on Saturday and Sunday. Entrées include traditional favorites like eggs Benedict and French toast (with local camembert and a blackberry syrup); but there’s some California zest on the menu, too, like chilaquiles—a traditional Mexican tortilla dish—with lobster, corn, poached eggs, and salsa verde.

Kids can get their own breakfast meals, courtesy of Kelly’s young sons who developed the kids dinner menu (a healthy salad, tacos) and kids brunch menu (French toast sticks). Redwood also hosts parties for all kinds of occasions in its banquet room (seats 80),

from wedding rehearsal dinners to Woodstock Film Festival events. One year through, the restaurant is clearly part of the Uptown diaspora.

“We’re kind of a tight-knit community in Uptown,” says Kelly. “We’re super excited the place has [fallen] into our lap, to be part of the community, and getting into it when we did.”

Dinner is served 4–9pm Sunday and 5–10pm
Monday, Friday and Saturday.
Brunch starts at 10am Saturday and Sunday.

A Burger For Everyone