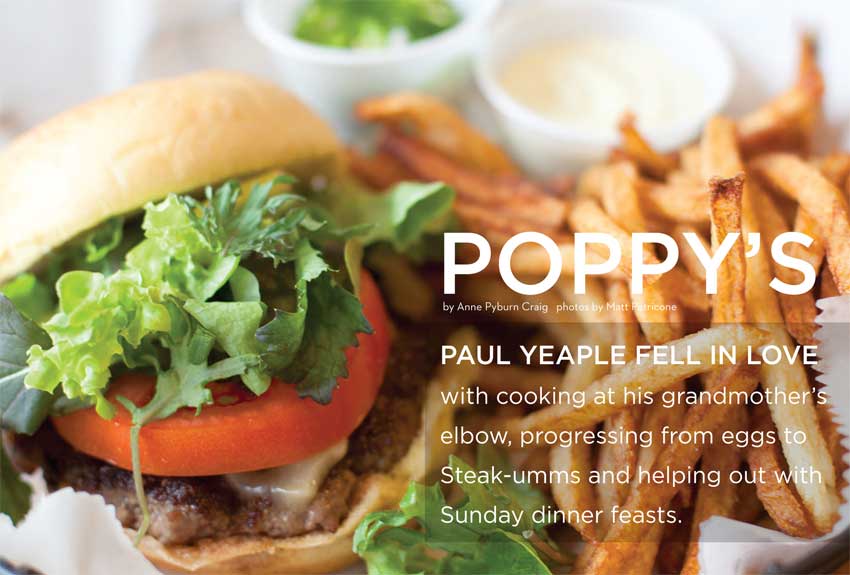 PAUL YEAPLE FELL IN LOVE
with cooking at his grandmother’s elbow, progressing from eggs to Steak-umms and helping out with Sunday dinner feasts. 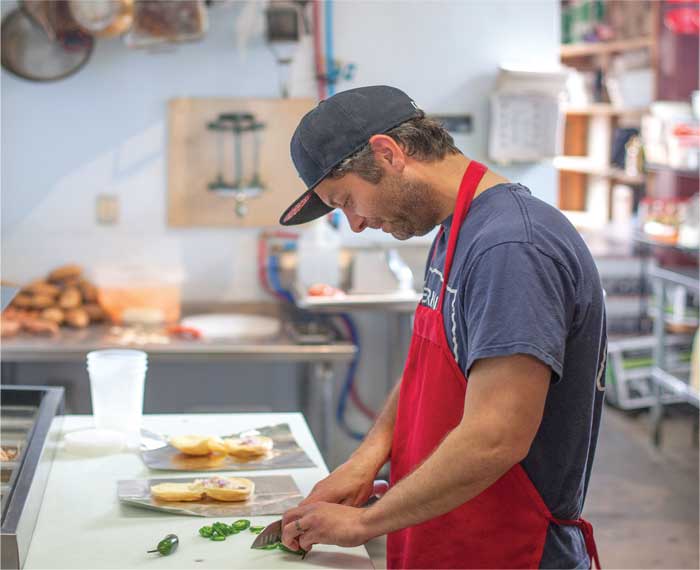 “I can still remember the first time we made real mac and cheese,” he says. “Kraft stood no chance after that.” He also remembers trying to calculate how many tables his childhood house would hold “just in case I ever had the chance to open it as a restaurant.” College led to a stint in the banking industry, but it never held his interest the way food did. And he wanted to be his own boss. “I knew I had to begin anew. I was 35. I quit my job and went to culinary school.”

That was in 2005. Four years later, Poppy’s Burgers and Fries was born. “We opened our doors on January 29, 2009. The world’s economies were melting, apparently, so I figured it was a good time to open an upside-down business. Most businesses try to buy the cheapest raw materials and sell them for as much as possible. I wanted to serve local food for as affordable a price as I could. The locavore movement had already begun. The Hudson Valley was already providing upscale restaurants in NYC with our local produce and meat, but there was nothing available upstate. I wanted local people to enjoy the bounty of their valley as well—at a price they could afford. That bounty has grown exponentially since and will continue to for some time.”

Beacon, says Yeaple, was the ideal site for his baby: “I chose Beacon because it was very affordable, with a wonderful Main Street and the largest contemporary art museum in North America. And I wanted a lifestyle very much like NYC, where I didn’t have to drive very much to get everything I needed done. Beacon’s that kind of town. Almost everything you need is on Main Street. There’s a great energy and sense of community that’s only gotten better since I opened.” His love affair with food is guided by a down-to-earth philosophy. “Any animal I eat has to be loved and respected for what it gives me. I take no dominion over it; I am just thankful for the chance to feed myself and my family. I believe the best diet is one rich in real foods. There is no other food category besides meat and produce, and I’m definitely not going to eat produce with pesticides on it. Not because I’m a hippie, but because that’s just stupid.”

Hippie or no, he speaks of beef production with a fierce compassion. “If we’re gonna eat meat, the animal has to be treated humanely and with respect for the bounty it gives us. It can’t be tortured or packed into a warehouse. Mostly because that’s mean, but also because a well-treated animal that’s healthy and unstressed tastes better, is healthier for you, and isn’t filled with bad mojo.”

“With every meal I make, I think about Grandma and how much joy surrounds a good kitchen.

I worked in a restaurant in Brooklyn, and the woman who ran it wouldn’t let you in if you had a bad attitude. I’ll never forget that.” 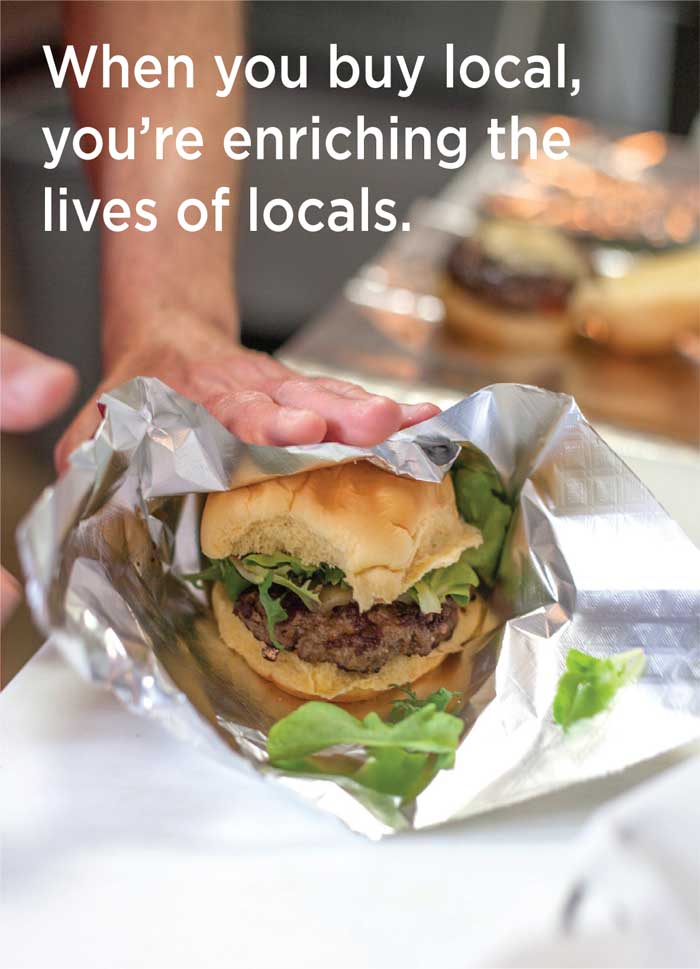 And you won’t find long-distance veggies in Poppy’s kitchen either. “Why would I ship in produce from South America? The valley provides us with so much. The biggest, most important reason is that we will all do better if we keep our dollars here. When you buy local, you’re enriching the lives of locals. If people near you are doing better, you’re going to do better. Keep your dollars close by and eventually they will be spent back on you; give your money to Mr. Target and you just made someone rich in China.”

It’s been an intense six years, full of adventure and challenge. In 2010, Yeaple took his feisty temperament and culinary ability nationwide on the Food Network series Chopped. “It was scary. I was worried that if I did poorly people would just come into the restaurant and point and laugh and then not actually buy anything. I was so nervous before the date that I thought about pulling out. What fun is that, though? Glad I didn’t.” He won. The uninspired banker has reinvented himself and couldn’t be happier, despite endless challenges and surprises. “There is no preparation for entering the restaurant business,” he says. 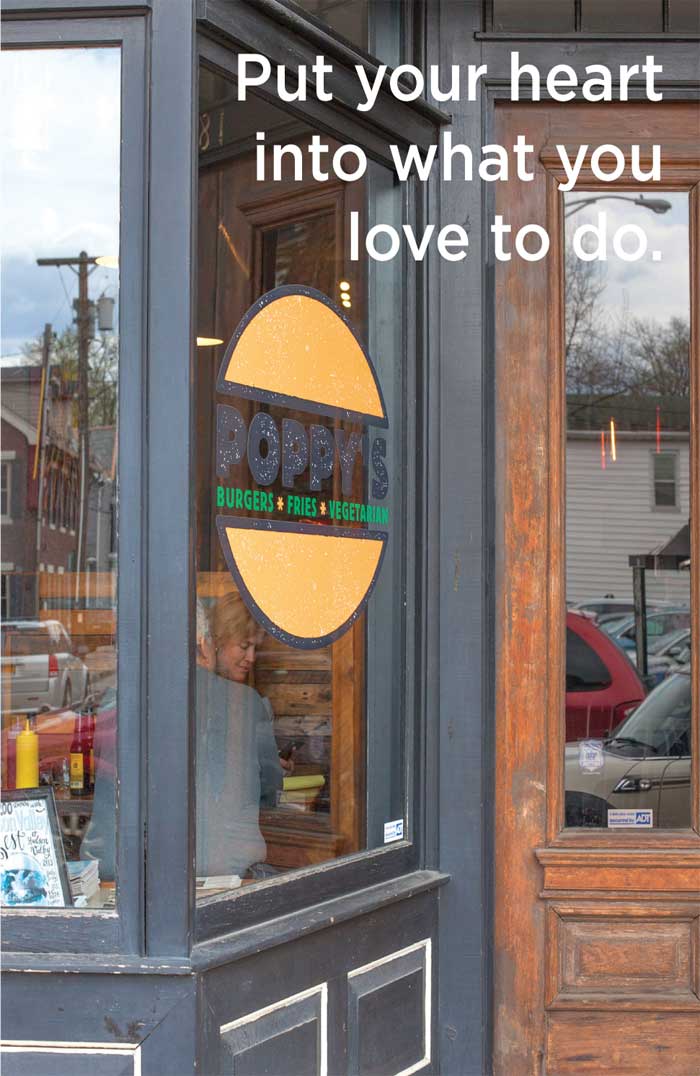 “You go into it, and you either sink or swim, period. Many people fail in the first year, not because they don’t have a good idea, but because they just don’t seem able to keep up with what it takes. If you’re not fully into it, this industry will eat you alive. I’m barely surviving, and I’m as hard as the mountain I live under.”

Yeaple’s good idea keeps him going through horrid winters and momentary setbacks. “Poppy’s is all heart and soul. It started with one premise: Make that burger in front of you the best ever, every single order, as best as you can. Put your heart into what you love to do, because if it works you might change that person’s perception forever. With every burger I make, I think about Grandma and how much joy surrounds a good kitchen. I worked in a Mexican restaurant in Brooklyn, and the woman who ran it wouldn’t let you in if you had a bad attitude. I’ll never forget that.”

Poppy’s did a major renovation two years ago, adding a bar and more beer options, switching from take-out only to table service, and expanding the menu to include green salads and a vegan rice bowl. Yeaple says the future is about “more beer, more burgers, and more hours. We’re trying to be more convenient and serve more people. We’d love to stay open later and be open every day. We’re also trying to open more Poppy’s. 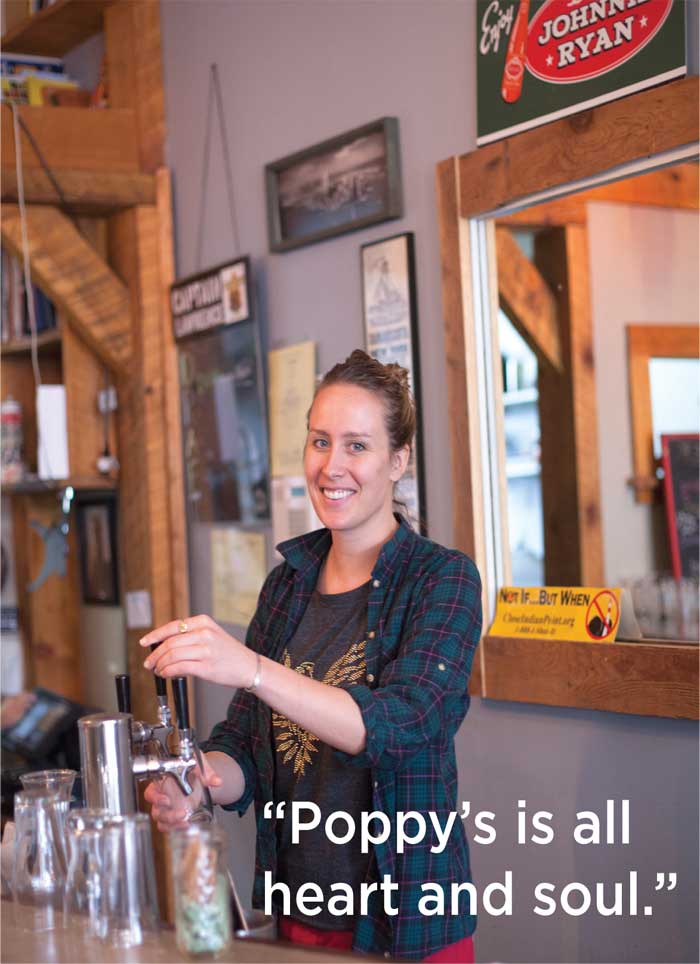 We think everywhere needs the best burger ever.” Meanwhile, as part of the Hudson Valley’s farm-to-table scene, Paul Yeaple is a man in the right place. Running Poppy’s offers not just a greater sense of a right livelihood, but (perhaps surprisingly) more glamor. “When I was a VP, working for a giant corporation wearing a nice suit and all that, no one was really impressed. Now I smell like grease, but when I tell people I’m a chef, their faces light up. It’s about as close to being a rock star as I’ll ever get. Melissa Leo, who had just won the Oscar for Best Supporting actress, came in a couple times and said it was the best burger she ever had. How awesome! Easily the best thing ever is to hear someone say that was the best they ever had. It’s so motivating. It makes me feel I’m doing the right thing. Someone always seems to say it just when I need it the most too. I feel like the universe is behind me. Thanks, Grandma!”