IF THE STARS SEEM BRIGHTER IN THE WINTER, IT’S BECAUSE THEY REALLY ARE—THE WINTER NIGHT SKY ACTUALLY HAS MORE BRIGHT STARS.

As the autumn fades, so does the Milky Way, but the Hudson Valley’s dark winter skies offer up plenty of jewels in its place: several of the year’s best meteor showers, the brightest galaxy in the Northern Hemisphere, many beautiful double-stars, and a nebula that resembles our own solar system in its infancy, billions of years ago.

To make the most of the descriptions below, you’ll need access to a star map. If you don’t have one, monthly magazines like Astronomy (astronomy.com) and Sky & Telescope (skyandtelescope.com) publish highly usable charts and maps to get you started. Alternatively, you can go straight to the Internet, at either of the above sites, and easily generate an accurate sky chart for your location tonight.

The Brightest Galaxy in the Northern Sky
Beautiful Double-Stars 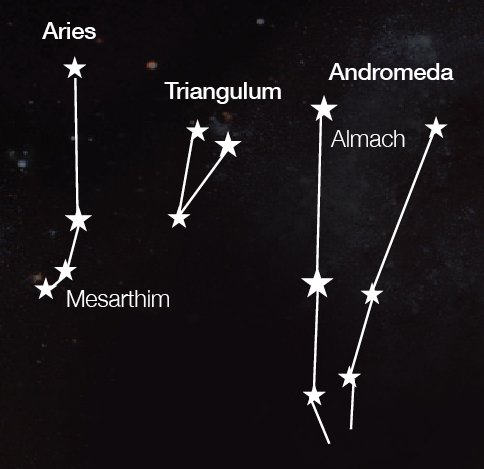 A small constellation in the northern sky, Triangulum is well placed at this time of year for observations of the Triangulum Galaxy (M33), a small spiral galaxy. Only 5 percent as massive as our own spiral galaxy, The Milky Way, it’s a dim fuzzy object in 8-inch scopes and requires good dark skies to show any detail. Compare and contrast with the Andromeda Galaxy, the vast bright spiral galaxy to the west.

Once you spot the Andromeda Galaxy (M31) with your binoculars or telescope, try viewing it with the naked eye. You may need to use “averted vision”: shift your eyes slightly to the left or right and use your peripheral vision, which is far more sensitive in low light situations. You should be able to make out a faint fuzzy patch, the photons from which have traveled in a straight line for 2.4 million years to end their journey on your retina—M31 is literally the furthest thing you can see with your naked eyes.

At the tip of the Andromeda’s brightest limb is Almach, a lovely orange/blue double. And finally, below Triangulum, in Aries, is Mesarthim, another lovely double, orange/green, sitting 207 light years distant. 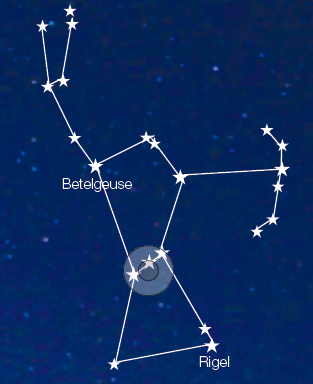 Right after the Big Dipper, Orion is the most well-known and easily recognizable constellation, in part because it’s one of the few constellations—with its shoulders, torso, belt, and sword—that has the appearance of an identifiable shape. Orion sails across the southern horizon from winter through spring.

Even in small telescopes, the Great Orion Nebula (M42) provides marvelous views, with every increase in light-gathering power yielding richer detail and exposing its wonderful three-dimensional cloud structure: newly-minted pinpoint stars hang silent among filaments of hydrogen that stream across space for trillions of miles.

The cloud is a stellar nursery, resembling our own solar system billions of years ago. At the center of the nebula sits a formation of four stars (from west to east: A, B, C, and D) known as the Trapezium: it’s these young and very hot stars, with others, that make the nebula glow.

Betelgeuse is the red star in Orion’s top left (eastern) corner. In fact, Betelgeuse is an M1 red supergiant—about 650 times the diameter and 15 times the mass of the Sun. If Betelgeuse were to replace the Sun, its size would engulf the orbits of Mercury, Venus, Earth, and even Mars. An ancient star approaching the end of its life cycle, the supergiant’s size fluctuates wildly and it may soon explode as a supernova that would be as bright as the crescent Moon.

On the bottom right (western) heel of Orion lies the brilliant blue Rigel. Rigel is also supergiant, though much younger than Betelgeuse. It shines a remarkable 40,000 times more luminously than our own Sun; there are a million stars closer to us than Rigel, but none shine nearly as bright.

Compare the colors of Betelgeuse and Rigel on your next outing under the stars. Their color tells you their age. Young stars are blue/white. Old stars are red/orange.

On November 18 the Leonid Meteor Shower peaked. Unfortunately this year, the moon is present, washing out the sky more than we’d like, but the Leonids have often produced truly spectacular showers, with thousands of meteors raining down per hour. You never know. (Normal peak rates are 15-20 fast meteors per hour.) Best results are to be had right before dawn. Look south for Leo’s famous backwards sickle shape, which marks the lion’s head and encloses the shower’s radiant.

On December 14 the Geminid Meteor Shower peaks. The Geminids are the most reliable shower of the year, producing bright, colorful, moderately swift meteors that sometimes break apart as fireballs. The shower is thought to be intensifying every year and recent showers have seen 120 to 160 meteors per hour under optimal conditions. The best viewing time is in the early hours, around 2 to 3am local time.

On December 23 the Ursid Meteor Shower peaks. Radiating from the Little Dipper (Ursa Minor), this shower generally produces rates of 10 meteors per hour, but has been known to have short bursts of 100 meteors per hour.

Relaxation in the Hudson Valley