Land conservation isn’t exactly a new concept, but few had the idea back in 1869 when the twin Smiley brothers purchased 280 acres and a ten-room inn in the heart of the Shawangunk Mountains. Since then, local conservation has included the creation of state parks and other preserves, such as Minnewaska State Park Preserve, Sam’s Point Preserve, and Catskill Park, but there have been very successful private efforts as well, one of the most important being the Mohonk Preserve, celebrating its 50th anniversary this year.

Since 1963, the Mohonk Trust, which became the Mohonk Preserve in 1978, has steadily grown into the 8,000 acres it now encompasses. In addition to preserving land and its associated wildlife, the Preserve is an authoritative voice when it comes to the protection of our natural beauty here in the Hudson Valley and throughout the Northeast. With more than 13,000 members, it is an organization that has been way ahead of the curve when it comes to outreach programs and the ethical use our unique lands. Their four main areas of focus—environmental education, land protection, land stewardship, and conservation science—make the Preserve one of the region’s most treasured organizations.

The Preserve is now adding to its footprint by incorporating 534 acres of land around one of the most iconic structures in New Paltz, the testimonial gateway and original entrance to the Mohonk Mountain House, which can be seen as you drive west from the Village of New Paltz on Route 299.

Gretchen Reed, who is the Director of Marketing and Communications for the Preserve, says that the Preserve is partnering on this project with the Open Space Institute (OSI), an organization that has been responsible for helping preserve more than 2.2 million acres in North America. “We have purchased a number of properties from Open Space Institute,” Reed says. “We purchased the Giant's Ledges property in Rosendale from them last year (2012), and this year we’ve entered into an agreement to purchase a portion of the Mohonk Preserve Foothills from them.” OSI, interestingly, purchased the foothills land in 2011 from Smiley Brothers, Inc., owners of the Mohonk Mountain House. 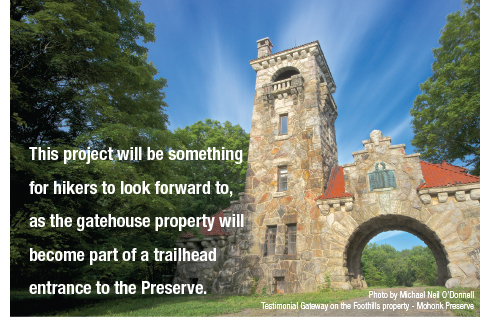 This project will be something for hikers to look forward to, as the gatehouse property will become part of a trailhead entrance to the Preserve. In addition to the Visitor Center and West Trapps trailheads on Routes 44/55, visitors will be able to access the Preserve just outside of the Village of New Paltz.

Years ago, when visitors would come up to the Mohonk Mountain House from the city, the gatehouse would be the first Mohonk-related structure they would pass. “That ended relatively early though,” says Reed, adding that the gatehouse became functionally obsolete after the mass production of the automobile got going in earnest. “We have photos of it when it was the horse-and-carriage entry to the Mountain House…and it is, once again, going to be a gateway to the ridge, just to a different portion of the ridge.”

The structure itself, though, like many old buildings that fall out of active use, needs to be stabilized and preserved as part of an overall trailhead connectivity project. The project will also incorporate an area known as Humpo Marsh, an important area for migratory birds and other wildlife. And there are also grasslands that will be preserved, providing habitat for numerous species. With grasslands in this area disappearing at an alarming rate, this kind of long-term thinking will mean future generations can enjoy this diversity and, more importantly, that our avian friends will be with us for a long time to come.

Part of this process involves grants from the Hudson River Valley Greenway and New York State Conservation Partnership Program, the proceeds of which have been used to develop plans to integrate the Mohonk Preserve Foothills with the Preserve's exisitng carriage road and trail network. “The trail connectivity planning is looking at the entire property, including all the existing carriage roads and trails on the property, to determine which ones are the best ones to continue to use and how we can create the best circulation plan,” Reed says. “And then, in a complementary plan, we’re doing a comprehensive assessment of the actual trailhead, which will involve parking and initial access to the property.”

All of this, however, will take into account the delicate ecosystems in the area, so the Preserve will continue to do what its name indicates. Currently, the Preserve manages more than 75 miles of trails and carriage roads, and it attracts more than 150,000 visitors annually. All of this is maintained by dedicated staff and volunteers. Some of these trails and roads are more difficult, designed for experienced hikers, while others are gentler, and well suited to those of us who are rediscovering what it means to be active.

Raising money, or course, like most non-profit groups, is something the Preserve engages in on a consistent basis. Recently it undertook a $5.5 million capital campaign in order to fund this and other projects, and many donors in our community have generously aided this cause. “In our ongoing capital campaign called 'Conservation for the Next Century,' we have a land protection component, in which we have identified a number of high-priority, environmentally important lands that we would like to acquire,” Reed says. “And we were very fortunate that in December of last year we were awarded a $500,000 grant from the New York State Conservation Partnership Program, which will help fund the $2.5 million acquisition of the Foothills Property. And then we also have an ongoing capital campaign called ‘Conservation for the Next Century.’ An important component of that campaign is land acquisition, of which this is a portion.”

The Preserve has also participated in the reintroduction of species that had previously been extinct on the ridge. Peregrine falcons were reintroduced in 1975, as well as the fisher, a member of the weasel family, and the wood rat. “That’s really the key—connectivity,” Reed says. “Connectivity is important not just for recreation and educational opportunities, but also for wildlife, to maintain connected open spaces. That’s another important thing we consider in terms of our land protection goals. We’re working with our other partners … to create these connected areas of open space for wildlife.”

Visit mohonkpreserve.org to read about all the Mohonk Preserve offers, from its educational outreach programs to its conservation efforts and guided hikes. The website also includes an interactive history timeline that allows web visitors to see how the Preserve started out and how it has been expanded over the years. You might be interested to know that there have been a number of scientific endeavors associated with the Preserve, including students from SUNY New Paltz using it as an outdoor environmental lab, studies on the gypsy moth, and precipitation collection. Much has taken place at the Preserve during its 50-year history.

Better yet, stop by and visit the Mohonk Preserve’s Visitor Center at 3197 Route 44/55, Gardiner. The Visitor Center is open year-round, free of charge, and it offers opportunities to take a self-guided outdoor stroll, explore the indoor exhibits about local flora and fauna, learn about the Center’s green geo-exchange heating and cooling system, or examine the three-dimensional topographical model of the region. Here you can also become a member or purchase day passes to enter any of the Preserve’s four trailheads. Individual membership is $55/year and $45/year for seniors and students; additional biking options are an extra $15 and technical rock climbing options are an extra $35. Active duty military service members receive special discounts. Day fees are $12 for hikers and $17 for climbers and bikers.

Each autumn, the Preserve also offers special events. For instance, the Pfalz Point Trail Challenge 10-Mile Benefit Run will take place on September 22, and the annual New Paltz Climbing Film Festival is scheduled for the weekend of October 11-12. More details about these and other events are available at the website.

If all of this sounds like something you’d be interested in, it’s a simple process to become a member. And the Preserve is always seeking volunteers if you’d prefer a more hands-on approach. If nothing else, you’ll become well-informed as to the difference between the Mohonk Preserve and Mohonk Mountain House. People often confuse the two because the Preserve and Mohonk House are adjacent to one another, creating nearly10,000 acres of natural land, and this doesn’t even include the 2,220 acres located within Minnewaska State Park Preserve, which also abut the Mohonk Preserve. Reed says, “What started with the preservation of some land that was owned by the Smiley family has now extended into Rosendale, Gardiner, and down into New Paltz. But, yes, we are obviously linked by both name and heritage.” And a reciprocal agreement allows Mohonk Preserve members to pay an additional $10 to park at the current gatehouse of Mohonk Mountain House and visit its resort grounds and carriage roads.

This autumn, witness for yourself the beauty of the Mohonk Preserve’s forests, streams, and meadows. The Preserve has something for people with all abilities, and autumn is the time to relish fall colors and connect with nature during the season’s cool mornings and warm days.

So, be sure to visit the Preserve during these glorious autumn days in the Valley, and consider joining their efforts to save the land for life.

From Soup to Nuts