At Columbia Costumes & Beauty, everyday is Halloween. While the store is certainly a non-stop party in the month of October, people interested in masquerade and shape-shifting keep Columbia just as busy other months of the year. And no wonder. Whether you want to transform yourself into an alien, superhero or monster, or just want to perk up your appearance with the help of some make-up, Columbia has the goods.

Starting as a store for beauty goods in 1973, Columbia did a steady business for years. In 1985, costumes and wigs were added to the inventory, bringing a more adventurous clientele out of the woodwork.

Costumes and beauty products were a career shift for owner Laura Spaey, who had prepared for a career in agriculture, after graduating college with a degree in biological sciences. Following a stint in England where she studied anthroposophy and biodynamic agriculture, Spaey was a garden instructor at the Waldorf School in Sacramento, California.

Spaey originally returned to New York state with a five-year plan: to alleviate the workload of her ageing parents by taking over a portion of the store hours at Columbia. She would eventually take over the entire business and began growing it. Three decades later, Spaey has no regrets. 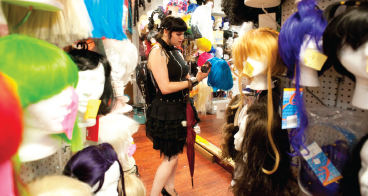 “My folks had given a lot to me and it was my chance to give back.”

Spaey recalls the turning point in the business came during a sidewalk sale, when a co-worker added wigs to the inventory. “People came in for more,” Spaey said. Simple costumes were added to the racks, such as devil horns and tails. Spaey built out her offerings from there, attending the annual Halloween Costume show.

“It has been a lot of fun, finding new merchandise, looking for specifics for my customers.” She enjoys sparking the enthusiasm and imaginations of people across the region who walk through her doors with the desire to transform themselves.

“Our plan on running the business is to get adults to dress up,” Spaey said. “We have always made sure to carry enough of a variety of supplies that each customer can be unique.”

Accordingly, there are masks that range in category from animal to horror to fun to traditional Venetian styles. Costumes include everything to become a creature of the night to a sexy superhero to a fairy tale favorite. An extensive line of theatrical make-up also includes wigs and prosthetic noses in addition to mascara and face paints.

“People are steadily amazed by what we carry and the quality of our stock.” 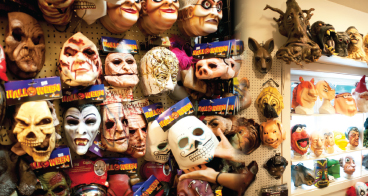 Learning on the job as the new owner-manager, Spaey simply followed her intuition on which costumes to stock, dividing the offerings between traditional Halloween garb and current costumes popularized by films and TV shows.

The breakthrough moment for Columbia was attained “when people started bringing their friends,” Spaey said. She has never had to look back. The costume and accessory inventory is augmented seasonally with a global search for small manufacturers. Steady business comes from high school drama departments in the area, as well as community theater troupes.

However, Spaey has learned one important lesson about the nature of her costume business.

“No matter how many people shop early, most will procrastinate. I've learned to be patient. But every customer leaves my store both happy and looking unique, so my staff and I couldn’t ask for more.”