Discover the Area's Hidden Past 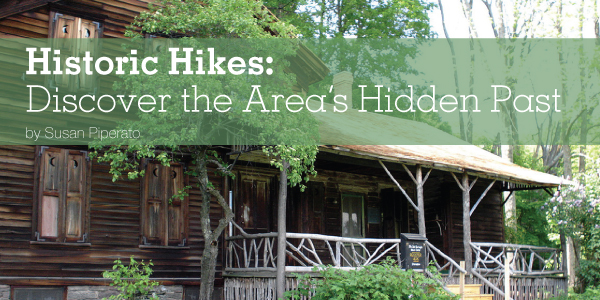 Spring is the season for discovery, when everything comes alive again and the world seems new. Three hikes—in Ulster, Dutchess and Greene counties—offer a chance to explore nature’s fresh bounty and the region’s bountiful history too.

The John Burroughs Sanctuary, a national historic landmark located in West Park, Ulster County, provides a satisfying hike, views of nature, and literary lore. At the center of this 170-acre preserve is Slabsides, the log cabin that was hand built in 1895 by naturalist and writer John Burroughs less than a mile from the family home at Riverby. For 25 years, until the end of his life, Burroughs wrote at Slabsides—named for the rough, bark-covered strips of lumber covering its outer walls. Visitors to the humble, one-room cabin included Teddy Roosevelt, John Muir, and Henry Ford. The cabin, placed on the US National Register of Historic Places in 1968, still holds Burroughs’s original rustic furniture, writing desk, and books. Although the cabin itself is only open for tours twice a year, visitors are always welcome to peer through the windows and picnic on the porch.

The sanctuary’s slightly hilly terrain is easily navigable for children, but not so level that it becomes humdrum for the avid hiker. And there is plenty to see aside from the cabin, including two large ponds where beavers can be observed, and a celery swamp planted by Burroughs that still produces edible stuff here and there. 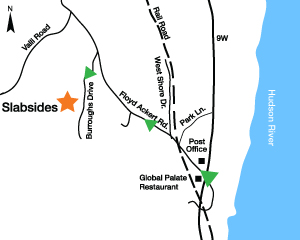 Trail construction is constantly being improved thanks to funding from New York and a sizable group of volunteers. In 2011 a stone pathway was built around and over immovable bedrock, and a 70-foot boardwalk was built through the celery swamp and finished off with a 55-step stone stairway.

The sanctuary is open year-round with free admission, and an open house is held twice a year in May and October. This year’s open house takes place on May 19 from noon to 4:30pm and features nature walks and talks, as well as tours of Slabsides.

To visit Slabsides, from Route 9W in West Park, turn west onto Floyd Ackert Road (between The Global Palate restaurant and the post office), cross the railroad tracks, and follow Floyd Ackert Road about a half mile to the foot of Burroughs Drive on the left side of the road. Park there and head up the hill on foot, or drive up the hill and park at the green gate on the right, then walk through the gate and up the gravel road for a fairly level 0.3 mile toward Slabsides. For more information on programs and a downloadable map, visit research.amnh.org/burroughs. 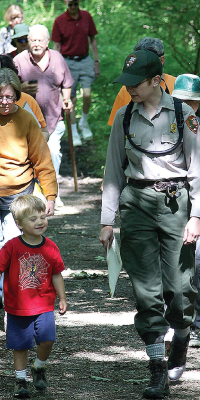 If trails could tell stories, Hyde Park’s Roosevelt, Val-Kill, and Vanderbilt trails would be well worth listening to. The 10-mile historic road network connects the national historic sites of the FDR estate; Top Cottage, FDR’s retreat; Val-Kill, Eleanor Roosevelt’s retreat; and the sumptuous art deco Vanderbilt estate. Exploring the entire loop of trails is possible in about three-quarters of a day, but it’s easy to pick up one or two of them for a few hours.

Riverfront Park on Route 41 is a good starting point for a hike as it’s halfway between the Roosevelt and Vanderbilt sections of the trail. There is plenty of parking space, plus a picnic pavilion and playground, and an old railway station to check out.

The Vanderbilt Loop starts about 0.2 mile north of Riverfront Park, accessible via a short road shoulder walk. The 2.4-mile trail takes you on a dirt path away from the park and then along a ridgeline overlooking the Hudson back to the park. The upper segment of the trail near the Vanderbilt Estate’s meticulously landscaped grounds is mostly paved and offers amazing views of the Hudson River from several points.

The Roosevelt Trail begins 0.6 mile south of Riverfront Park and also requires a road shoulder walk to get there. This 1.2-mile section of the trail cuts through the woods on its way to Springwood, FDR’s home that’s now the FDR National Historic Site, and just south of the house are plenty of spots for great Hudson River views.

From the FDR National Historic Site, cross Route 9 to head out on the 2.5-mile Val-Kill Trail and 1.5-mile Val-Kill Loop. This is where Eleanor Roosevelt walked and picnicked with her grandchildren, visiting foreign dignitaries, neighbors, and the Roosevelts’ beloved Scotties. “If beauty were good for the soul, then I wish I could have taken the whole world to walk with me this Saturday at Hyde Park,” she wrote after one of her walks. Many of her “My Day” columns, and even her draft of the Universal Declaration of Human Rights, were written following her walks.

The trail to and from Val-Kill, that “shack in the woods” that FDR joked that he had built for his wife, features an antique fieldstone wall to follow along past deeply wooded areas and see wildflower meadows, groves of white birches and hemlocks, and a vernal pond that appears with spring rains and disappears in the summer heat. Watch for salamanders. The climb up Dutchess Hill from the FDR National Historic Site to the fieldstone Top Cottage—which FDR designed for his favorite childhood play spot and where he entertained Britain’s king and queen—is well worth it. At the peak of the hill, which is the summit of the trail network, you’ll not only be able to stroll Top Cottage’s grounds but you’ll be able to see the village of Hyde Park.

Roosevelt Farm Lane is part of the network that connected the Roosevelt Home, Val-Kill, Top Cottage, the Home Farm, and FDR’s tree plantations, and can be accessed from any of those sites. The Roosevelt family farm, known as the “Home Farm,” stretched along the east side of Route 9 from the current site of the Hyde Park Drive-In Theater south for nearly a mile.

Until 1945, the flat, fertile lands along Routes 9 and 9G were used for growing crops, while the rocky, wet interior land was only suitable for growing trees. To the east, along Route 9G, FDR leased land to a series of farmers, but 21 acres of the interior of the land were heavily planted with trees by FDR—Norway spruce, tulip-poplar, and red and white pines—between 1912 and 1944.

After FDR’s death in 1945, the property was subdivided, with some of the land along Route 9 developed for commercial use. But the core of the land remained largely undeveloped. It was acquired by the Scenic Hudson Land Trust Inc. in 2001, and transferred to the Home of Franklin D. Roosevelt National Historic Site in 2007.

Dogs are welcome on the trails, but bicycles are only permitted on certain stretches.

The grounds of Val-Kill, Top Cottage, Vanderbilt Estate, and FDR National Historic Site are accessible year-round, from sunrise to sunset. The FDR National Historic Site is open throughout the year as well, from 9am to 5pm. The three other sites are open April through October. Guided tours of each site are available throughout the day, the last tour is 4pm. Tickets are $8, with children under 15 admitted for free. For more information, call 845-486-1966 or visit historichydepark.org.

Here’s one hiking and biking trail that more than lives up to its name: The 19-mile Catskill Scenic Trail winds through a bucolic valley dotted with small towns and farms, from Grand Gorge to Bloomville, along the Delaware River at the western end of the trail, and from Roxbury to Grand Gorge at the eastern end. Springtime is the best time for this hike, when the woodland is a world of unfurling leaves and all the farms’ fields are fertilized and sprouting the green shoots of the harvest to come.

It’s possible to go for miles without seeing anyone else, except for a lot of grazing cows. Although there may be some muddy spots on the trail leftover from the spring thaw, you’ll be rewarded by wildflowers and a landscape so soft and green that it vies with Ireland’s.

The trail can be accessed at several points, but the Catskill Revitalization Corp. recommends using the designating parking area at the historic train depot at the intersection of Railroad Avenue and South Street in the Village of Stamford.

Although there is only a 400-foot change in elevation over the entire trail, Stamford is at its peak and it is downhill in both directions from there. The restored train station serves as an information center as well as the office of the Catskill Revitalization Corp., which owns and manages the Catskill Scenic Trail and the Delaware and Ulster scenic railroad. But Stamford also has a romantic side: It is situated at the bottom of Mt. Utsayantha, which means “beautiful spring,” and is associated with a tragic legend.

Utsayantha was a local American Indian maiden who was said to have borne a child by a white father, angering her father, the chief, so much that he killed the white man by splitting his head open with a tomahawk and drowned the baby in a nearby lake. The despairing Utsayantha followed her father to the lake and drowned herself as well. Upon discovering her body, the chief carried his daughter up the mountain and buried her there. Her gravesite was thought to have been placed in 1862, but many still doubt its authenticity. Tourist development of the site, however, began in 1882 with the construction of a carriage road, observation building, and wooden fire tower. The structures were refurbished through the Mt. Utsayantha Project in 2006, and the monument placed there in 1926 still stands.

Head east from Stamford for a 5-mile trek along the Delaware River to Grand Gorge, where you can see beavers making dams and building lodges—and where you’re likely to find a tree or two felled across the trail. Further along the trail, you’ll pass some strange rock formations along the eastern branch of the river as you head toward the village of Roxbury.

Or go west for a 4-mile walk to Hobart—Maple Street is a good source for both cafes and used bookstores. From Hobart, the trail passes through a farmyard featuring some rather bold turkeys and past the Belle Terre rehabilitation center on the way to South Kortright. From there, it’s on to Bloomville. You’ll cross several bridges back and forth across the river—and pass some prime fishing spots—before reaching the Sheffield Farm Dairy Plant, which was the site of the first milk pasteurization center in the US. Then cut across Route 10 and take a short path downhill to reach the Agway Road parking lot and the trail’s end.

GET OUT FOR SOME WINTER FUN