From past to present

Fine dining is abundant throughout the Valley. We are gifted with restaurants that house expert chefs, local foods, grass-fed beefs, and high-style ambiance.

Take a moment to realize how fortunate we are here. Whether you are in the mood for fresh fish, organic vegetarian fare, gourmet Mexican, French, Italian, Japanese, Indian, or Mediterranean—the Valley has it all. It’s difficult to imagine life without these restaurants. No diner to get a quick, hearty breakfast and soak in the local culture. No indulgence of allowing someone else to prepare a gourmet meal for you. Nowhere to even stop for a bagel or coffee? Over the course of human evolution, we’ve combined food and lifestyle to accommodate the needs of the era.

Restaurants are almost as old as civilization. Remnants of a tavern were found in the ruins of Pompeii, Italy, buried under ash from over 2,000 years ago. These ancient eateries provided food and spirits to travelers who were obliged to take whatever foods were made available at a fixed time and price. They were not fine establishments offering variety or ambiance, nor did they demand any etiquette.

By the 16th century, Englishmen dined out often. Local taverns offered meals, wine, ale, and tobacco, and served as an informal clubhouse, generally for men only. Such tavern-restaurants existed in many other countries; for example, establishments in Germany and Austria served delicatessen, sauerkraut, and cheese, and in Spanish bodegas tapas were served.

For the first modern-style restaurant that allowed people to eat what, when, and how much they wanted, we must turn to France. In 1765, a soup vendor named Boulanger opened a shop offering diners a choice of dishes, primarily hot soups and hearty broths. The sign above Boulanger’s door read “Restaurants”, meaning “restoratives”, referring to Boulanger’s meat-based consommОs that were intended to “restore” a person’s fortitude. The term restaurant, which previously referred to “soup” or “hot broth,” was eventually adopted by many other nations.

A Parisian restaurant founded by Antoine Beauvilliers in 1782, called the Grand Taverne de Londres, became noted as the first to introduce the novelty of listing dishes on a menu and serving meals at individual tables.

After the French Revolution, guilds that (since the Middle Ages) were licensed by the king to control specific foods were abolished. It became easier to open a restaurant. Cooks and servants from the estates whose aristocratic owners had fled took advantage of the entrepreneurial opportunity. Individually portioned and priced foods were made readily available to a broad and hungry public for the first time.

Restaurants created a general feeling of well-being, safety, and community following such a chaotic period in French history. Dining was a privilege that was no longer held only for the wealthy. The top restaurants of the day boasted immense menus, including choices of up to 12 soups, 65 entrees, and 50 desserts. With the development of the restaurant, artistic flare in plating was born, adding an artisan touch to the trade. This rich enjoyment paved the way for the spread of the modern restaurant.

Travelers from France excitedly brought the news of these restaurants to an American public that was already heavily influenced by French culture. In 1794, a former cook to the archbishop of Bordeaux, Jean Baptiste Gilbert Payplat, opened his own French-style restaurant in Boston. He became known as the “Prince of Soups,” recalling the original meaning of the word restaurant.

Over the centuries, restaurants have grown to offer a diverse array of dining experiences. Here in the Hudson Valley, local farms are feeding an expansive gourmet culture. Chefs throughout the region use local and organic products, including cheeses, apples, mushrooms, and meat.

Adding to our home advantage, many local chefs are graduates of the Culinary Institute of America (CIA) in Hyde Park. Chefs learn culinary craft at the CIA and then develop their own sense of style with food. This creates a culture of exquisite restaurants in the Hudson Valley, and has raised the bar for more educated diners and chefs.

There are a myriad of amazing local restaurants throughout the Hudson Valley. It is truly a gift that local chefs care enough about food, health, and community to form relationships with our farmers and create cuisine that is indigenous to the Hudson Valley. This is a remarkable culinary region—a feast from the spirit of the land.

Chop off top of artichoke and trim sides and stem.
Submerge in white wine and lemon juice.
Add salt and pepper and fresh thyme and cover with foil.
Braise for 15 minutes at 325º till tender.

Mix all ingredients and toss with artichokes and rocket greens. 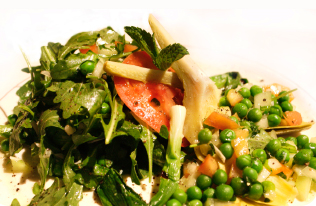