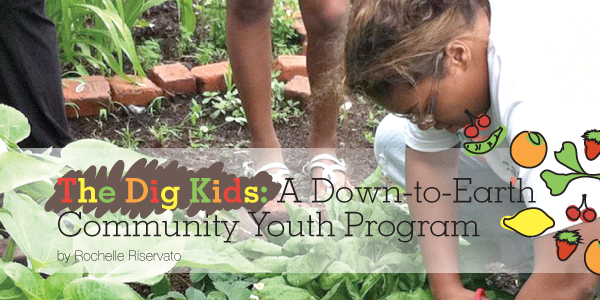 by Rochelle Riservato // Photos courtsey of The Dig Kids

“The Dig Kids: An Urban Farming Program” for Kingston youths was created by the Kingston Land Trust with a $3,000 grant from the Columbia Foundation and a $1,000 donation from Family of Woodstock. The Kingston Land Trust was founded in 2008 by Arthur Zackiewicz and Steve Noble. Executive Director Rebecca Martin spearheaded this project, which is also funded by the Robert Wood Johnson Foundation with $360,000 over four years.

About The Dig Kids Program

Throughout the five-month, May to September, program five youth Garden Mentors are paid a stipend to work after school each week—totaling 10 hours a month at their main garden site at the Everette Hodge Center on Kingston’s Franklin Street. Youths must be 14 to 19 years to participate—and each selected Dig Kid can choose a Junior Gardener 13 years or younger to mentor throughout the program.

Martin noted that teenagers are typically expected to do something for nothing and although it’s important to let youths know the value of volunteering, she said, “Paying the teenagers is more than an incentive; it’s also a way for them to learn to take care of themselves as many teens today work to help pay their family’s bills.”

According to Martin, The Dig Kids got off the ground with the assistance of Megan Weiss, coordinator of Kingston Cares, a Family of Woodstock program. Weiss located the five teenage gardeners who live in Midtown. Weiss said that she loves her connection with the Kingston Land Trust and this program. Giving much credit to Weiss, Martin said that Weiss was instrumental in introducing The Dig Kids program to the community youth, working with families to ensure youth participation, and assisting with planning, supervision, and transportation.

“When I first started working at the Everette Hodge Center six years ago, the current garden area was covered in weeds and was not being used at all,” said Weiss. “The first year, I worked with a few children to remove the weeds and plant a few flowers and continued to spruce up the area, but never would have realized the potential of that small garden area without the collaboration with the Kingston Land Trust.”

Weiss added that when Martin came to her with The Dig Kids idea, “I knew we’d be creating something that would change the community for generations to come.

“I absolutely LOVE this program,” said Weiss. “The program teaches youth to be aware of what they’re eating and where it comes from and provides them with skills that will prepare them for job opportunities. They pass by the garden they created every day and it serves as a constant reminder that they have the power to change the way their community looks with their own two hands. The children are proud of what they grow and are experiencing many foods (such as kale) for the first time. It’s truly a joy to be part of this program!” 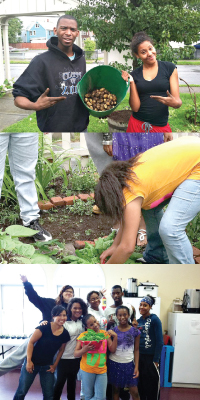 In addition to growing vegetables and tending gardens, The Dig Kids learn culinary skills, visit farms, and sell some of their crops to the community under the stewardship of another major player in the program—farmer Jesica Clark, whose past experience working with the Phillies Bridge Project successfully turned a quarter-acre vacant lot into a thriving organic farm called The South Pine Street Farm located at 27 Pine Street off Greenkill Avenue in Kingston. The Farm is a program of the Queens Galley in partnership with Binnewater Ice Co. and the Kingston Land Trust; the produce is used in the Queens Galley soup kitchen.

Said Clark, “The lot was actually a struggling community garden for the last couple years. I was asked to take it over and transform it into something more cohesive and productive while still having it be open and available for the community.”

Another fantastic addition to the farm is the Midtown Farm Stand that was built with materials and labor by Hugh Cummings of Hugh-Name-It-Builders of Kingston. Last season the farm stand sold fresh vegetables on Monday, Wednesday, and Friday from 4 to 7pm, with plans to do the same for the 2012 season. The Midtown Farm Stand gives residents the option to purchase seasonal organic vegetables at a better price because transportation and other associated costs are eliminated.

“We’re probably the closest source of farm fresh vegetables to that part of Kingston,” said Clark, who also delivers seasonal vegetables to local stores and restaurants in a farm-to-table effort.

Clark said The Dig Kids was an inspiration to her own work as a farmer because the youths showed such enthusiasm: “Growing up in the city, myself, I wish I had something like this when I was younger.”

Expecting more participants for the second year, as word has rapidly spread and recruitment will start earlier this year, Clark’s goal for 2012 is to start training for the next generation of farmers and gardeners and “giving second year participants more responsibilities and more learning opportunities with an eye-out for program expansion—both within Kingston as well as other cities.”

Martin said, “The kids also learned how to nurture, not just what they grew, but each other and themselves. And as they picked their crops, they learned how to cook with them.”

The pilot year was a huge success according to Martin, who identified the participant youth as Syndi Alonso, Sandi Alonso, Jessica Palmitier, Brenda Olivo, and Matthew Brownlee. Eighteen-year-old Kingston High graduate Sandi Alonso said, “I loved this; it was so much fun. It was hot outside, but we did what we had to do and I even got a farmer’s tan, as farmer Jesica called it.”

The oldest participant, 21-year-old Matthew Brownlee, had never had any previous gardening experience and the closest he was to a fresh veggie was in a grocery store produce department—however, after the program Brownlee is planning to continue this endeavor as a possible future. In fact, organizers are hoping to make him an assistant to Clark at the Pine Street Farm.

Last year’s Dig Kids program celebrated their first harvest season by parading from the Everette Hodge Community Center’s garden to the gates of the South Pine Street City Farm. Their guests enjoyed a barbecue of donated burgers and hot dogs from Fleisher’s Grass-Fed and Organic Meats prepared by program volunteers and the Maple Ridge Bruderhof community, who also helped serve up garden veggies and kid-made pickles.

Family of Woodstock’s Weiss acknowledges Kingston Land Trust Director Martin as the driving force behind The Dig Kids and urban farming throughout our area.

“If the budget allows it,” said Weiss, “we will reach out to even more youth to offer them this exciting opportunity and encourage the senior Dig Kids to become leaders and role models within the program.” Weiss’s office is located at the Everette Hodge Community Center’s garden site, enabling her to become actively involved in identifying kids she knows would enjoy the program—even those who don’t even know they’d be interested in farming.

Said Weiss, “I’ve worked hard to build trust with the children and families in the community and I’m glad to be able to connect them with such a spectacular program.”

Donations for The Dig Kids 2012 program are currently being accepted. Please contact Rebecca Martin, executive director of the Kingston Land Trust at 845-877-5263 or email rebecca@kingstonlandtrust.org for more information and how you might be a future donor or sponsor, or Jesica Clark at 845-380-9183.

The Dig Kids program can also be found at: kingstoncitizens.org; kingstonlandtrust.org; and cceulster.org.

Banking on the Community

The Gift of Giving