Now that autumn is here, it’s time to give your garden that last little push prior to putting it to bed for winter. And, for die-hard gardeners like myself, there are plenty of rewarding tasks to do before the snow starts to fly.

One of the easiest ways to squeeze out a few extra weeks of bloom is to plant some late-season flowers. Of course, the most obvious of these are the ubiquitous, showy mounds of color provided by MUMS and ASTERS. Though both are perennials (at least in general terms), I usually treat them as annuals for use in containers and for plugging gaps in gardens and borders. As perennials, these garden stalwarts can handle frosts, but often look fairly ratty by the time their blooms have faded. If one intends to treat them as true perennials in the garden, please note that the 10-inch tall aster you purchase in the fall can morph into an enormous plant the following year. As for the mums, they too can come back far larger than expected, and should also be pinched back once or twice during the following growing season to prevent them from blooming too early or from becoming too leggy.

Another widely available late season bloomer is the PANSY. Low growing, showy, and a bit whimsical, pansies are available in some of the season’s most bewitching colors, including orange, purple, burgundy, and even black. Indeed, Monet was mad for black pansies and planted great swathes of them in his gardens at Giverny.

Of course, one can also add splashes of seasonal color by strategically placing displays of PUMPKINS, GOURDS, MILLET, and CORN STALKS about the garden. Be warned, however, that this can have surprising and/or unpleasant consequences in areas known to be frequented by bear. One year, I gave some clients quite a scare by covering their deck with lavish groupings of these seasonal goodies—only to receive a frantic call one morning requesting that I haul it all away because it attracted the attention of a foraging bear. It never occurred to me that my autumnal decorating represented a feast for the unexpected ursine visitor.

I am very busy this time of year doing clean-ups for my clients; however, a fall clean-up does not necessarily mean that the garden should resemble a moonscape afterwards. I often choose to leave certain perennials and grasses standing that provide visual interest and food for wildlife. Among the perennials included in my list of PLANTS TO LEAVE STANDING for their interesting seed heads are RUDBECKIA (black-eyed Susan) and sedums such as AUTUMN JOY. I also always leave decorative grasses standing. These will turn lovely shades of gold and russet, providing color, movement, and even a musical rustling sound throughout the winter.

During my clean-ups, I always remove spent annuals and cut down any perennials that look shabby. Most of these go into the compost pile; however, do not add any plant material to your compost pile (at least if you intend to use the compost) that is diseased. Fall is also an ideal time to DO ANY NEEDED TRIMMING OR PRUNING, as the branch structure of trees and shrubs is most evident after the leaf fall. Do not, however, trim forsythia or other spring-blooming shrubs at this time (except for damaged or dead branches) as you will be removing the spring blooms. This is also not the right time to shape boxwoods or other dense shrubs in hedges as this might encourage late season growth that will only be killed by the coming frosts. 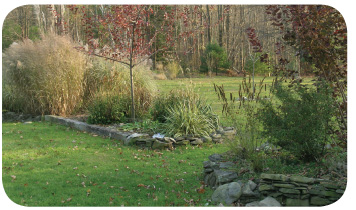 Fall is also a great time to plant trees and shrubs, provided that you do so early enough in the season, allowing six to eight weeks for them to become established prior to the ground freezing. On this note, one word of caution: Many nurseries offer excellent sales this time of year, but beware purchasing trees and shrubs after the leaf fall, as it is difficult to judge the specimen’s health without the leaves being present. I made this mistake on more than one occasion last year.

On leaves and mulch: 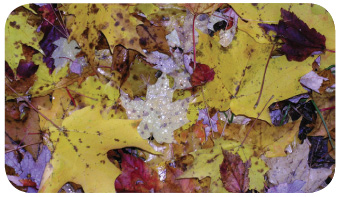 After the garden is tidied up, now is an excellent time to ADD A LAYER OF MULCH. It seldom is a bad time to add mulch, as it provides so many benefits. During the winter, mulch helps to insulate roots from winter’s chill as well as prevent excessive moisture loss from drying winds if the snow cover is lacking.

Why not leave a layer of fallen leaves on the garden as mulch? This is a question that often arises this time of year. I always REMOVE LEAF LITTER FROM GARDEN BEDS unless it is in a very naturalized, woodland garden setting. Fallen leaves do make a great mulch provided they are shredded first. If whole leaves are left to rot where they fall, they form dense, damp mats that do not readily break down and play host to molds, fungus, and slugs. In addition, the volume of leaf litter in some areas will smother plantings and deprive them of light.

Other points to consider:

Of course, it goes without saying that fall is the time to PLANT SPRING-FLOWERING BULBS. Of the many types of bulbs available, I often avoid tulips, as they tend to poop-out after a few years and everything from voles and squirrels to deer find both their blooms and bulbs delectable. Instead, I plant loads of DAFFODILS and ALLIUMS (decorative onions). These are untroubled by pests and put on a reliably smashing show each spring.

Autumn is also a good time to cover the trunks of young trees with one of the many commercially available types of TREE WRAP. This process protects trees from developing splits or cracks in their bark caused by rapid temperature fluctuations.

Finally, fall is a great time to begin planning for next season. I trust you are all looking forward to curling up in front of the fire with a cup of hot cocoa and a few good gardening books, magazines, and seed catalogues. NOW GO OUT AND PLANT SOMETHING—WHILE YOU STILL CAN. 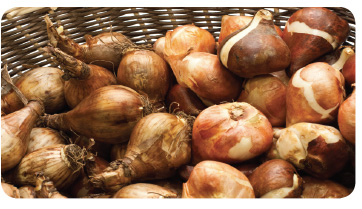 Eric Stewart is a garden designer, writer, and fine artist who is based in Accord. He may be reached at Greenman Garden Design, 845-687-9166 and greenmangarden.com or via email at elsgreenman@aol.com.

15 QUESTIONS TO ASK when hiring a contractor

THE COLOR OF MOODS