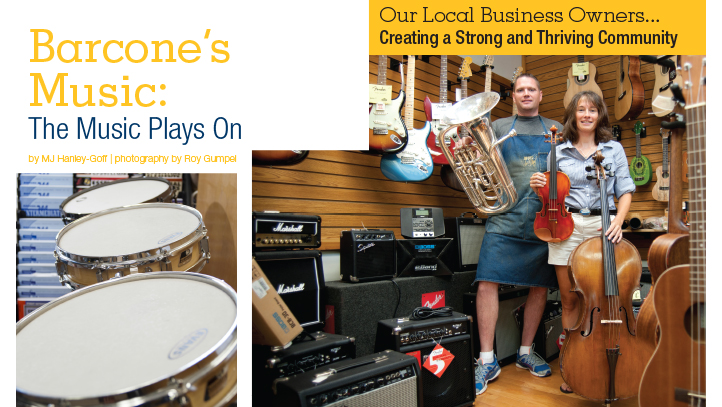 Barcone’s Music. Any musician in the Hudson Valley knows this store. It is the place to rent equipment, get advice, buy reeds, and test out some of the best-made instruments in the industry. Barcone’s can meet just about anyone’s musical needs, and they do it with friendliness and integrity in this family-run business.

Though Barcone’s Music Shop just lost father Tim Barcone to a too-soon death, the store lives on, and Tim’s presence is giving family members and staff the strength to do so. You can hear in his daughter Melissa’s voice how much she misses her father: “It was very sudden…he was only 61,” she explains of the heart and soul of Barcone’s Music shop on Broadway in Kingston. “The summer,” she says, “is the music shop’s busiest season, and all she and her family can do is keep going.”

Begun by Tim’s grandfather, Henry, the family’s music business started out in New York City. “Henry introduced musical instruments to the public school system in New York City,” says Melissa. “And this got my grandfather started here in Ulster County. He drove up from the city with 40 instruments and gave them to Ben—my grandfather—to start his own business in Kingston.” Ben’s son, Tim, joined the family business as a repairman in 1965 and opened his own shop—what is now Barcone’s Music—in the early 1970s. Even though Tim was also interested in biology, it was repairing instruments that gave him his greatest joy; the business provides services to an astounding 90 school music programs in eight counties. The love of music has been passed down to daughter Melissa and her brother, Tim Jr., who now run the business. The next generation isn’t far behind as Melissa’s kids also play instruments and her son Ryan, 11, is already showing interest in the family business.

A glance at Tim Barcone’s obituary on the Gormley Funeral Home website provides pages of testimonials to a man who “didn’t just repair instruments, but rather gave a piece of himself to each instrument he fixed.” One particular remembrance was from a former customer and the one that Melissa says sums up the kind of man her dad was:

“I only met Mr. Barcone one time and that was on June 7, 2013 (just a few days before he passed away). He made a lasting impression on me. [In the shop] a teenaged girl explained to him the type of reeds she needed, and when he told her the price she looked sad. She only had $20 and was a little bit short of the sale price. Mr. Barcone said to her not to worry—he sold them to her for the $20 she had and said just play well at your concert!“

Before his passing, Tim Barcone was an astute businessman who foresaw the Internet would make the music business extremely competitive and change the way people shopped, so he created an extensive and informative website. He also saw that the Internet offered inferior instruments but knew that customers would continue to find him for his high standards and true love for the instrument and music in general. He was right!

As Melissa and Tim Jr. continue their father’s legacy, they are getting a new crop of students ready for their instruments come September, making sure they’re delivered to the schools in time. They are also treating each customer as if they were family too. They know their Dad is watching. “He was a big teaser,” remembers Melissa. “When you were in a bad mood, within no time, he would make you smile, and you’d end up feeling good.”

Some things will never change at Barcone’s Music. The business rests in the skilled hands of Melissa and Tim Jr., and it is still the place in the Hudson Valley for music lovers to frequent.”