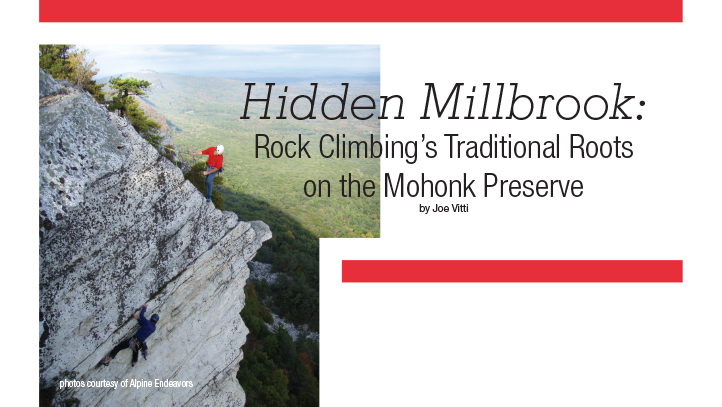 Climbers have been visiting the Shawangunks for nearly eighty years.
Today there are over a thousand named rock climbs on the four main formations—Skytop, The Trapps, The Near Trapps, and Millbrook Mountain—and the busiest days can have as many as 1,200 climbers struggling against gravity on the steep cliffs of the Mohonk Preserve. Despite the huge number of climbers, Millbrook Mountain sits quietly, much like it did in 1935, when it drew the first climbers. These climbers marched up to the wall through fields, forest, and talus to the base of the wall and climbed what today is known simply as Old Route.

Despite its history and the fact that it is the tallest formation in the Gunks, Millbrook is decidedly not popular with climbers. Exponentially more hikers visit the glacier-polished dome of Mill-brook’s summit every year than the sheer cliff face below. A crowded day climbing at Millbrook will certainly see far more vultures soaring lazily back and forth than climbers dancing upward.

There are barriers to climbing at “The Bank,” as some call it, but the rewards are rich for those willing to accept the challenge. It’s approximately a seven-mile round trip hike to get to Millbrook from the Mohonk Preserve’s West Trapps parking area. This means that most folks need to get an early start. There also seem to be more ticks, wasp nests, and snakes at Millbrook than almost anywhere else on the ridge. Also, one must rappel 50 meters from the top of the cliff to a large ledge that traverses the length of the wall, endearingly known as “Death Ledge.” This increases the feeling of commitment, as the only way out is up! And this means traveling through some hazardous rock—due to the nature of the rock and the lack of much climber traffic, the first 30-50 feet of most Millbrook climbs have a bit of loose, dangerous rock. Lastly, the routes are hard; grades for these climbs tend to be in the higher echelon—5.10 to 5.12—and they are steep and exposed like few others in the Gunks. But here lies some of the reward!

Millbrook has the purest traditional climbing on the Eastern Seaboard. No bolts have ever been placed there, and there exists just one permanent rappel anchor on the entire cliff. Climbers who bring the requisite expertise, determination, and fitness are rewarded with many of the finest and most challenging sections of climbing in the United States. While the world around us is a whirling dervish of shifting attitudes and styles, Millbrook remains largely just as those early pioneers found it in 1935.

To Get There
Park at the West Trapps Parking Area of the Mohonk Preserve on Route 44/55. The Mohonk Preserve is a nonprofit land trust that manages and protects 8,000 acres along the Shawangunk Ridge. A day use fee of $12 for hikers and $17 for climbers or an annual membership is required. If you are getting an early start and beat the rangers, please use one of the self-pay fee collectors to purchase your pass. These can be found at the entrance to the parking lot and just to the north of the Trapps Bridge along the Undercliff Road. 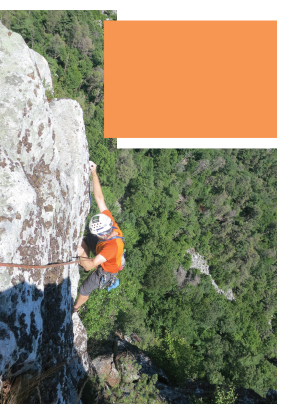 With some variation, there are essentially two options for getting out to Millbrook from the West Trapps parking lot. You can go along the Millbrook Ridge trail, which is very scenic, but the Trapps Road to the Coxing Trail is the quickest way. From the parking area, follow the Trapps Connector Trail from the east end of the parking lot to the stone steps leading up to carriage road. Go right onto the Trapps Road, and follow for just over a mile to the well-marked Coxing Trail on the left. This portion can be made super quick by riding a bike and locking it at the start of the Coxing Trail. Follow the Coxing Trail for a mile and change till it merges with Millbrook Mountain Trail and go left, continuing up the hill and on to the summit of Millbrook Mountain.

From the top, look east and then north (left) along the edge of the lower cliff band to find a large, mostly dead pine tree. This tree is the traditional rappel, and, due to its impending total demise, it is recommended to build an anchor nearby and then come back to retrieve it after you climb. Once you find the hard-to-miss tree, look to your left further, and you will find a somewhat faint climbers’ path that leads down off the summit into a large corner and onto a grassy area. The trail will then break right; follow it twenty paces or so until it splits, with one trail continuing roughly parallel to the cliff edge and the other going a bit left and directly to the edge. You’ll quickly find yourself looking down a funky fifteen-foot corner system. The big pine is obvious off to your left (looking out) on the lowest ledge. Look further left, and you’ll see a large terrace with lots of blueberries; this is where you will want to stash extra water and whatever you don’t want to climb with. Take extra care moving down to the ledge—though the climbing is not difficult, there is significant exposure here and using the rope might not be a bad idea.

You are now directly above one of the finest 5.7 climbs anywhere, Westward Ha!, and you will be rapping down; it will require a full sixty meters to reach Death Ledge. As you descend, look for the classic 5.10 Time Eraser about 40 feet to your left, and to your right you will see the popular and excellent Cruise Control.

Note that Death Ledge is quite wide in some areas and quite narrow and exposed in others. Seriously consider roping up for all traversing on this ledge; there is still at least a hundred feet of cliff below you.

More Beta
Dick Williams’ book, The Climber’s Guide to The Shawangunks: The Near Trapps/Millbrook is excellent. Additionally, local climber Christian Fraccia has created an excellent website dedicated solely to documenting Millbrook climbs and history. The site includes high-resolution photos with interactive topographic maps, as well as text descriptions of many routes. For more information, visit whiteclif.com. 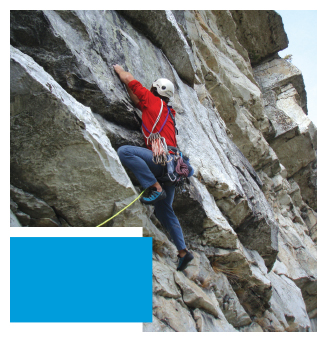 A Word of Caution
Rock climbing is extremely dangerous, especially so at Millbrook, for the cliff is isolated and poses a series of particular risks, such as loose rock, exposed ledges, and lack of fixed protection or anchors. Climb at your own risk, and be self-sufficient, as rescue from this area would be slow coming. Millbrook is not the place to be practicing your skills.

Joe Vitti is a full-time rock and ice climbing guide with Alpine Endeavors. He lives with his family in High Falls and leads trips here in the Hudson Valley, as well as climbing areas throughout the United States.

pluck your own autumn goodness

HIKING WITH YOUR DOG

Bethel woods center for the arts

Swimming in the Hudson Valley

Birdwatching In The Hudson Valley