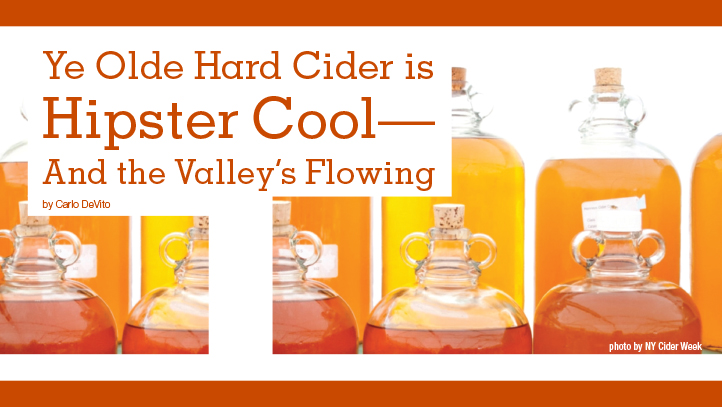 Was Paul Revere a hipster? How do we connect these two? In his day, Paul imbibed a lot of cider (like all Americans of the period), and today it’s the preferred alcoholic beverage of the hippest foodies in Brooklyn and Manhattan. For centuries, the Hudson Valley has been producing apples for New York City and the Eastern Seaboard. Thousands of acres of apples are cultivated, and apple growers form the backbone of the region’s agricultural heritage and current farming community. 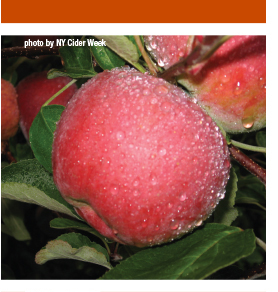 Sara Grady, director of special projects at Glynwood (a kind of sustainable farming think tank), points out that apple orchards have provided continuity and stability in the valley, saying, “Fruit growing is the only sector of agriculture where you can frequently see three or four generations of succession in the Hudson Valley. It’s a profound statement.”

Cider is amongst the oldest fermented alcoholic beverages known to man. Cider or cyder or cidre is fermented fruit juice, most commonly and traditionally apple juice, but also the juice of peaches, pears ("perry" cider), or other stone fruits. Cider varies in alcohol content from 2% ABV to 8.5% or more in traditional English ciders. In the United States and much of Canada, the alcoholic version usually carries the moniker “hard” to acknowledge its alcoholic content.

“Ciders once ruled all other drinks in taverns and farmsteads in early colonial America. Apple seeds were brought over on ships from Europe along with centuries of cider making traditions that quickly spread through the New World. With the westward expansion of pioneers and the help of "Johnny Appleseed", orchards were planted on most farms with the dual purpose of establishing proof of cultivation and homesteading and providing a source of cider. Fermented ciders were consumed in this region more than any other drink bar none,” writes Slyboro Cider House owner Dan Wilson, who is among the leaders of the cider revival in the Hudson Valley. It is estimated that typical Americans of the period took in an average of 34-35 gallons of hard cider a year.

According to Wilson, a combination of things led to the demise of cider in American culture, including prohibition, the urbanization movement during the industrial revolution that led to the abandonment of many orchards and agricultural customs, and the influx of German immigrants who introduced beer into our culture.

But cider is making a comeback! “English and French ciders are becoming increasingly common in the United States, as artisanal cider makers … use heirloom French and English cider apples and similar production techniques to create ciders that rival those of Europe,” reported Imbibe magazine. Even eminent wine professor and best-selling author Steven Kolpan of the Culinary Institute of America opined, “Hard Cider: What’s Old is New Again.”

Indeed, today cider is on the cutting edge. Not only can you get great traditional hard cider, but you can also try ciders that have been barrel-aged, hopped (with local hops), or spiced, as well as apple wines (usually much higher in alcohol) and iced ciders (think thick, unctuous dessert wine). And these new ciders can be found in Brooklyn and Manhattan—with foodies and gourmets lining up to try them all—from trendsetting restaurants to places like Murray’s Cheese in the Village.

The longest-tenured, continually producing cider maker in the Hudson River region is Warwick Valley Winery & Distillery with its Doc’s Hard Apple Cider line. It is the most popular and most widely distributed of all Hudson Valley ciders. Doc’s offers not only a mouth-watering traditional style, but also one tinged with raspberry, one that is hopped, and one with pumpkin (usually in fall).

Now there is a massive new birth. It is led by cider makers who have toured England, France, and Spain, trying different ciders, speaking with their European counterparts, trading information, and finding knowledge. They are using traditional cider apples from these regions as well as rediscovering Hudson Valley heirloom varieties as well.

The result? The Hudson Valley is brimming with cider! The Hudson Valley is the epicenter of the cider revival on the East Coast. Nowhere else is there this kind of concentration of cideries anywhere else. Longtime wine maker Jonathan Hull’s Applewood Winery is also a producer of the wildly successful Naked Duck line of ciders. New, cutting edge cideries like Arron Burr Cider, Kettleburough Cider House, and Bad Seed Hard Cider are solely dedicated to this new art form. They are making serious ciders with exciting new profiles. These aren’t sweet, apple-y hard ciders. Some are made using completely new forms of cider making.

Elizabeth Ryan, whose cider from the Hudson Valley Draft Cider Company has been featured on Martha Stewart, is another spokesperson for the renewal of cider in the Hudson Valley. She helped found Hudson Valley Cider Week, which will be held October 18-27. This annual event has become one of the keystones in the marketing of Hudson Valley agro-tourism. The promotion features grand tastings, restaurant cider dinners, symposiums, and much more.

So, who knows, maybe Paul Revere wore a pork pie hat, got inked, and wore Ray-Bans on his fateful ride. Maybe not. But there’s no doubt that he was hip, and, by drinking cider, you’d not only be drinking a bit of history, but you, too, could bring out your inner hipster!

Who was Johnny Appleseed?
John Chapman (September 26, 1774 – March 11, 1845), often called Johnny Appleseed, was an American pioneer nurseryman who introduced apple trees to large parts of Pennsylvania, Ohio, Indiana, and Illinois, including the northern counties of present day West Virginia. He became an American legend while still alive, due to his kind, generous ways, his leadership in conservation, and the symbolic importance he attributed to apples.