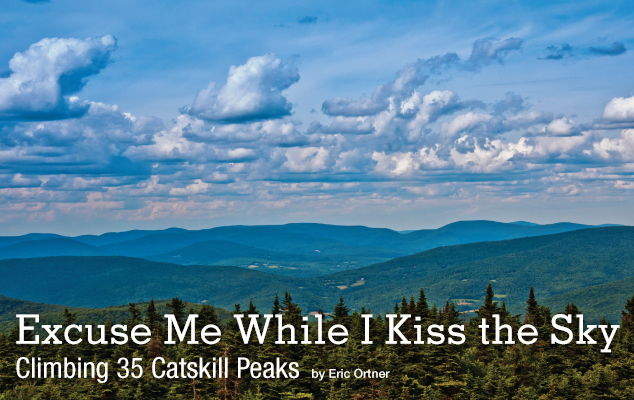 The Catskills are known across the globe for their fantastic recreational activities. Some enjoy the skiing or fishing. However, my true love is hiking up to an amazing scenic vista and watching the Appalachian Plateau unfold for countless miles. Those familiar with the Catskill Mountain range know that there are 35 peaks with elevations of 3,500 feet or greater. Some people have decided to climb all 35 of them, and I happen to be one of them. That, plus a $15 check, makes me a member of the 3500 Club.

To officially join the 3500 Club, aspiring members are required to climb all of the Catskill’s 35 highest peaks. In addition, four of the peaks—Blackhead, Slide, Panther and Balsam mountains—must be climbed twice. According to club rules at least one of those dual summits needs to occur in the winter between the dates of December 21 and March 21.

The 3500 Club is a volunteer organization that was founded in 1962. The club’s president Jean Taylor said, “We regard ourselves as the Stewards of the Catskills.”

Of the 35 Catskill peaks, approximately 14 of them do not have official trails. Taylor commented about the bushwhack summits: “We encourage respect for the wilderness. Two aspects of this respect are particularly important. One is learning how to be safe, especially off-trail, and the other is striving to have minimum impact on the wilderness, especially off-trail. A particular joy of the Catskills is the true wilderness of the trailless peaks, and we are particularly concerned about trying to preserve that. People who climb these mountains should not try to mark their passage by putting tape on trees or "improving" herd paths. You should be able to navigate up and down the mountains by reading the terrain and by use of map and compass, perhaps enhanced by GPS. If you don't know how to do these things yet, you should learn by going with someone who does (for example, on the club hikes). You do not do anyone a service, but rather do damage to the experience of everyone else who ever climbs these mountains, by failing to leave things as wild as you find them.”

I first became aware of the 3500 Club about 10 years ago when I relocated to the Lower Hudson Valley and began exploring the Catskills. At the time it really seemed like an insurmountable goal that would take a lifetime. That all changed about three years ago. On a dreary, rainy fall night I stepped out of my friend’s door and very badly broke and sprained my ankle. Alas, my ankle required major surgery following the accident.

During the painful one-year recovery I discovered that regular exercise made the ankle feel tremendously better. There was just one catch; I absolutely abhor the gym, which makes motivating for a regular exercise routine quite difficult in this day and age. Fortunately, about the same time I discovered the wonderful social world in the clouds meetup.com. With meetup.com I found a plethora of great hiking trips comprised of groups of amazing hikers. I used to think I was a hardcore hiker. That was until I started going on trips with my favorite Meetup hiking group, Hudson Valley Hikers. I wasn’t hardcore then, but I know I am now.

Hudson Valley Hikers was founded by Chris Baker in 2008 with the motto, “Challenge Yourself.” The group is renowned in the region for its very fast-paced hikes on strenuous and sometimes even dangerous topographies. The first time I climbed Breakneck Ridge near Cold Spring with this group I instantly became obsessed with the group. As I became more active with Hudson Valley Hikers I met more and more friends who were either aspiring to or had already joined the 3500 Club. This seemed to make my own membership much more obtainable.

During the Hudson Valley Hikers Anniversary Hike on December 15, 2011 I was speaking with a friend who had climbed all 35 peaks in six months. I asked him if that was a record. He didn’t know, but figured it was not. At about the same time, New York’s cold winter months had begun to dampen my well-established exercise routine. Being very deadline and goal oriented I started to think that maybe completing the Catskill 3500s in six months or less would be a good way to keep in shape over the winter.

On December 31 I made a list of New Year’s resolutions. They included joining the 3500 Club in six months or less, and recording a Grammy-nominated album—among other things. Unfortunately, I don’t think that I will be winning, or even nominated, for a Grammy in 2012, but I have completed the 3500 Club in exactly six months.

You can join too. Just visit catskill-3500-club.org, download the tally sheet, and start tracking your summits.