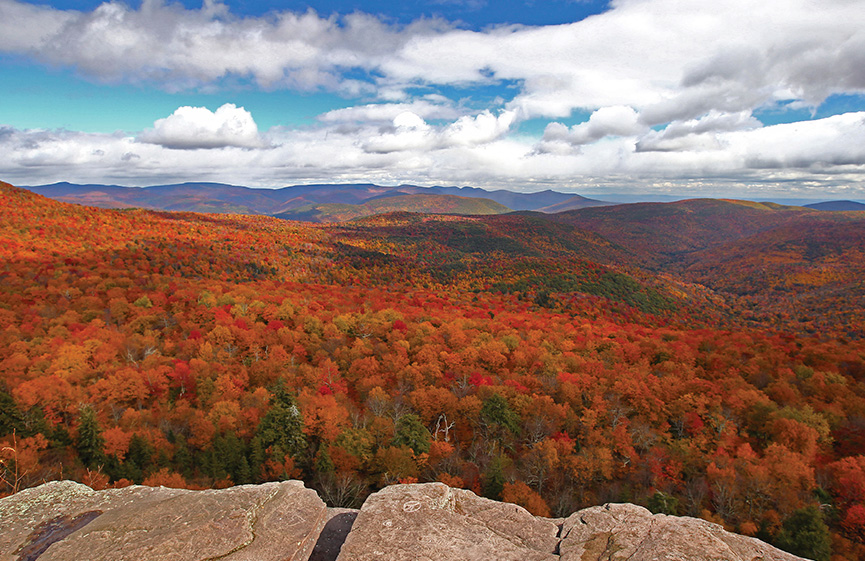 If you're looking for stunning views of the Catskills, Giant Ledge on Panther Mountain is hard to beat, especially in autumn. I did this hike during peak foliage—mid-October—and enjoyed a pretty memorable payoff when I reached the first of several "ledges" on the trail.

The trail up to the lookout points is pretty steep and very rocky. I often hike the Gunks and I'm used to the moderately flat carriage roads and foot paths on that ridge, but Panther Mountain is a different ballgame. The trail starts out flat but is mostly uphill and features a lot of rocks and boulders that will test your ankles and legs. But, again, the payoff at the top is legit and you can take your time. Hikers can park at the large shoulder on Route

47 in Big Indian (if you check Google Maps, there's actually a hiking trail marker for "Panther Mt. Trail" on Route 47/Oliverea Road, which you can get to from Route 28 in Big Indian). Look for the “Giant Ledge” trail head sign. Cross the street and make your way through the woods until you pass over a wooden bridge that spans a small stream. If it's flowing, it would be a good spot for a quick photo. 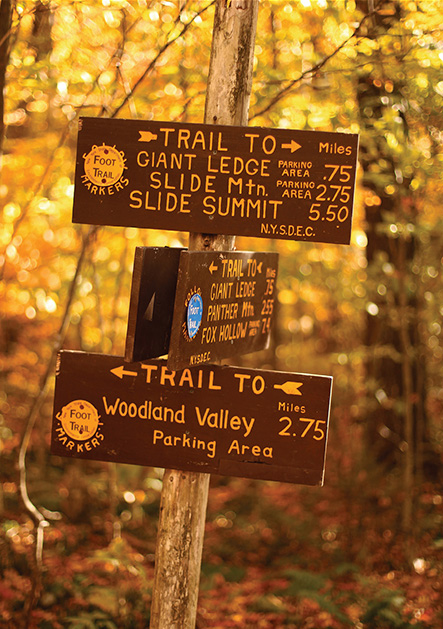 From there, you'll follow a yellow-blazed trail up the mountain as it climbs 1,090 feet. Giant Ledge is a little more than a mile and a half away, and you'll eventually come to a sign post with distance markers. Giant Ledge is .75 miles from the sign, and this would be a good time to note that "Giant Ledge" refers to five separate rocky lookouts on the mountain, not one, single spot. They all offer the same views and you can get to each pretty easily once you reach the main viewing area of the trail. Pick one, enjoy some water or lunch, and soak in the sprawling views of rolling Catskill Mountains below.

On my hike, we were treated briefly to a rainbow over a sea of orange and yellow leaves. The colors were incredible. For photographers, consider using a warmer white balance in your camera, like cloudy or shade, to give your leaves a little boost.

Expect other groups of hikers on the weekend and bring water. Hikers can also continue on toward the top of Panther Mountain, although the Giant Ledge views are the popular destination for most. Retrace your path back to your car when you're ready for dinner—it's a 3.2-mile hike roundtrip.

Panther Mountain itself has a pretty cool origin—geologists believe it was created by a meteorite striking the Catskills 375 million years ago, creating a huge crater (Routes 47 and 28 form a circle around the crater's footprint). Take a look at the fractured rock while you’re there, evidence of the impact from the crater.

HORSEBACK RIDING IN THE HUDSON VALLEY

Hudson Valley by Kayak or Canoe