The American beer palate has certainly become sophisticated enough to know that life exists beyond those boring old, mass-produced lagers that most of us consumed before we knew any better.

Since the 1980s there has been an explosion of microbreweries that have popped up across the country, with many producing beers that rank among the best in the world.

It’s worth noting the great brewing work that’s being done in our own area, here in the Hudson Valley. It’s also the perfect time of year to set aside that pale, blond concoction and depart for regions yet unexplored, to plumb the depths of something dark and malty—and better suited to the time of year. A crisp lager or wheat beer may be delicious on a hot summer day, but dark beers complement the cold weather with their bolder, more robust flavor. These hardy beers also pair well with the hardier fare we enjoy during the winter months.

While the two most popular types of dark beer are stout and porter—both are quite dark in color, with most bordering on the opaque—there are dozens of different styles of dark beer from which to choose, with flavor that is far more pronounced than your typical lager, ranging anywhere from somewhat sweet to arid dry. Whichever end of the spectrum you prefer, many, if not most, are easy to find at local beer distributors. And local microbreweries and brewpubs have a range of such styles to choose from if you wish to undertake a journey of dark discovery. 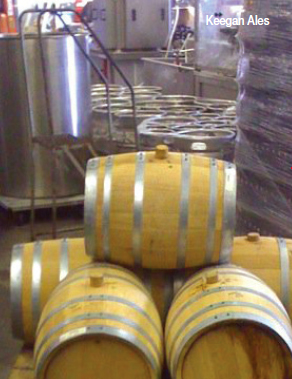 Tommy Keegan had never intended to become the owner of a brewery and brewpub, but he’s been at his St. James Street location in Kingston since 2003. His passion for brewing came about as a result of a Father’s Day gift he gave to his dad.

“My dad had always appreciated good beer,” Keegan says. “And I didn’t know what to get him for Father’s Day one year, so I got him a brew kit. I liked the idea so much that I went back the next week and got myself the same kit.”

Ironically, it was the younger Keegan who became obsessed with the practice of home-brewing.

“I was studying biochemistry at San Francisco State University at the time,” Keegan says, “and I just fell in love with brewing.”

So much so, that after Keegan received his BA, he went on to get an advanced degree in fermentation science from the University of California at Davis.

“The more I got into brewing, the more I realized there was real science in it,” Keegan says. “I was looking for graduate schools, I thought in genetics; but then I found this brewing program...and there was no looking back.”

“Mother’s Milk is our milk stout,” Keegan says about this rarely produced style. “I wanted to make a stout or a dark beer, and there weren’t a lot of commercial examples of milk stouts out there.”

This style, in addition to the traditional dark, roasted malts, contains lactose—milk sugar—which adds a luxuriant mouth-feel and a subtle tartness that underlines its sweet, malty character.

The second dark beer Keegan has on tap at the moment is a variation on the Mother’s Milk recipe called Joe Mama’s Milk. In this case, Keegan has added coffee and brown sugar at various stages of the brewing process to create what he refers to as a “coffee stout.”

The result is a robust, high-gravity ale that should be sipped to be enjoyed properly (it has an alcohol content of approximately eight percent by volume), and would pair well with holiday desserts.

Last, but not least, of the dark beers is Black Eye India Pale Ale (IPA). Like other IPAs, Black Eye has a strong hops aroma, in this case the rare citra hops variety, which gives it a nose that hints of tangerine, peach, and apricot.

And, while you’re enjoying your pint-of-choice, you’ll be able to enjoy some of the best barbeque in the Kingston area. The brewery also regularly hosts live music.

“Barbeque goes well with beer, and picnic tables and peanut shells on the floor,” Keegan says.
“Keep it simple.” 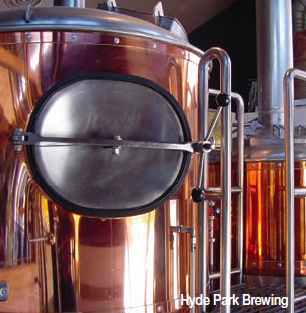 Joey LoBianco has been quietly producing quality beer in Hyde Park for the past 15 years. With a range of varieties on tap at any given time, LoBianco and his brewmaster, John Eccles, have come up with unique variations on some familiar favorites.

“We’ve been here since 1995, and we opened for business in 1996,” LoBianco says. “We started out with four different brews, and then expanded to six. The styles that we offer touch on a little bit of everything.”

LoBianco says that the pieces that were needed in order to open the brewpub seemed to fall into place. He says that there was one member of the family who had knowledge of the brewing business, and this friend had an architect friend who had actually designed several brewpubs down in Manhattan. When an ideal location became available, they decided to go for it.

Eccles got his start brewing at home, and then later began to pester a local brewmaster to teach him the trade.

“He had me scraping the mold out from under Grundy tanks,” Eccles says. “Anything to get rid of me.”

Fortunately, this didn’t work, and Eccles eventually absorbed all the brewmaster had to offer.

Hyde Park produces several pale beers—a helles-style German lager called Big Easy Blonde and a German-style Pilsner called Winkle Lager —as well as a few others that are in the mid-range when it comes to color. The brewery’s SOB (Special Old Bitter) compares favorably with its across-the-pond counterparts in the British Isles (it won the Silver Medal at the Great American Beer Festival in 2002).

The dark beer on tap that really stands out at the moment, however, is Von Schtupp’s Black Lager. Also known by its German name, Schwartzbier, this style relies heavily on roasted malts but is typically on the sweeter end of the malt spectrum. In Hyde Park’s case, their black lager offers hints of English plum pudding with hard sauce, candied fruit, and spice cake.

“It’s a great beer,” LoBianco says. “Johnny’s version of it is really outstanding.”

And chef Mike Connelly, a graduate of the Culinary Institute of America just down the road, isn’t bashful about experimentation with beer as an ingredient. A sorbet made with German hefeweizen (a light, citrusy wheat beer) is just one example of the fusion between the kitchen and the taproom.

There’s no doubt that the world has become a much smaller place in recent years. Beers that were once impossible to find consistently are now readily available, and in places outside the major urban areas. Aside from finding a large selection at local beer distributors, many area restaurants have extraordinary beer lists. 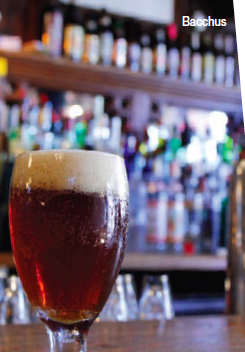 Bacchus in New Paltz
beer list is equally impressive. Feel free to ask one of the knowledgeable bartenders about seasonal beer specials or a unique international brew. Bacchus serves lunch, dinner, and a variety of bar food that satisfies veggie, vegan, and gluten-free diners. A consistent lineup of bands rounds out this beer destination.

The Country Inn in Krumville has been serving over 500 types of bottled beer from around the world for over 30 years. Stop in to see the extensive list and enjoy great food in an atmosphere that doesn’t require a jacket and tie. Explore seasonal specials that utilize local ingredients from regional farmers.

Gilded Otter
Down the street in New Paltz is the Gilded Otter restaurant and brewery. Enjoy the beer sampler of seasonal brews made by head brewer Darren Currier. The creative names for the brews include Ottertoberfest, Huguenot St. American Lager, and Stone House Export Stout. While enjoying the beers, explore the extensive dinner menu.

Aroma Thyme in Ellenville easily keeps up with the above beer veterans. The beer list is more like a book that takes some time to explore and get to know. The educated wait staff can suggest a nice beer, cocktail, or even an absinthe. The award-winning food at Aroma Thyme is not only friendly to any diet, it’s good for the earth. The fish, beef, and poultry are all purchased through sustainable sources, and local ingredients are prominently featured.

HopHeads in High Falls
HopHeads is a cozy little cafe in beautiful High Falls, NY where you can buy and sample microbrews paired with a wide variety of Hudson Valley produced smoked meats and cheeses. Offering 6 rotating taps of the best microbrews produced by American and Belgian craft brewers; with a big emphasis on New York state beers, as well as delectable charcuterie and cheese boards.

No matter which restaurant you choose, if you’re looking to experiment with porters, a good place to start is the domestically produced, and quite superb, Anchor Porter (perhaps not ironically, Tommy Keegan once worked for this brewery); if you’d like to try a porter from the old country, Samuel Smith’s Taddy Porter is exquisite as well.

There are other styles that tend to run to the dark side, some with stronger flavors. Almost any beer that emanates from Belgium, particularly those produced by Trappist monasteries, are always worth trying. And if you’re feeling particularly adventurous, barley wines are among the most flavorful of beer styles, with a deep malty sweetness and thick viscous body (Keegan’s Super Kitty Ale, which was produced in limited quantity, would fit in this category). Others to look for are the English Thomas Hardy’s Ale and Samichlaus from Switzerland/Austria.

For anyone traveling outside of our immediate area, Brewery Ommegang in Cooperstown is definitely worth a visit; and if you happen to be down in Westchester, drop in at Captain Lawrence Brewery in Pleasantville. Like their counterparts in our area, both are doing amazing work, producing world-class beer close to home.