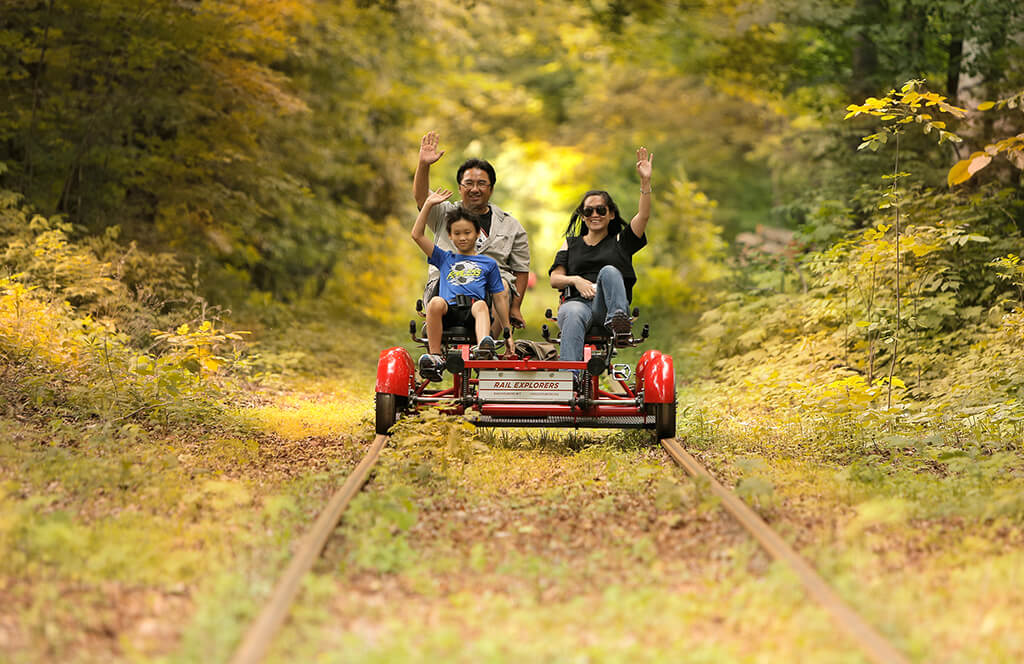 "Rail Explorers is passionate about being accommodating for all ages and all abilities."
– Mary Joy Lu, co-owner 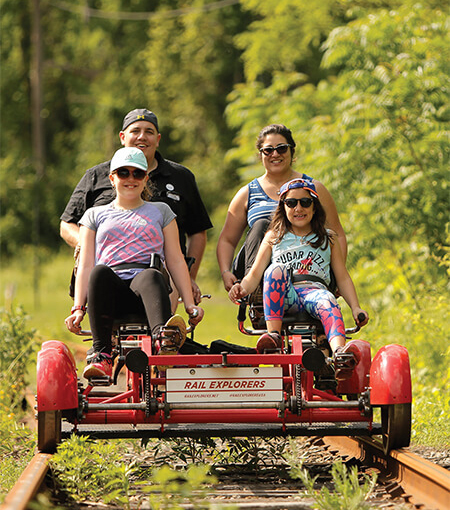 The newest way to explore scenic Catskill Mountain views has arrived. Rail Explorers—offering tours as the first and only large-scale commercial railbike company in the US—is here in the Hudson Valley, operating along the historic Ulster and Delaware Railroad.

Oddly enough, it was a scene in a Korean soap opera, featuring a couple on a railbike, that provided the inspiration back in 2012 for owner Mary Joy Lu to leave the New York City advertising scene with her husband Alex Catchpoole and create Rail Explorers.

“I was addicted to Korean soap operas,” says Mary Joy. “I just read the subtitles, but it was a great way to just switch off after a crazy Manhattan day. I was watching the soap opera and saw this couple on a date riding a railbike. I madly started googling bike, rail, Korea, and within a few months I was in Korea meeting the designer.”

In making such a dramatic career shift, Mary Joy says it was her background in the film industry that prepared her and Alex for their next steps. “In the film industry you get a script; it’s black and white and you have to make that script real. That’s all we did. We had a script and we made it real. Everyone said it was impossible, but in film, everything is possible.”

The 700-pound steel railbikes are equipped with steel cast wheels. “You really feel the clackity-clack of the track. This is not a paddleboat experience,” says Mary Joy. “It’s a powerful machine with zero friction between the steel tracks and the steel wheels.” Rail Explorers support ecotourism, and create little to no impact on the environments and ecosystems the tours pass through. Tandem and quad railbikes with electric pedal assistance make the eight-mile trip alongside the Esopus Creek and through the majestic Catskill Mountains an activity for the entire family.

“Rail Explorers is passionate about being accommodating for all ages and all abilities,” says Mary Joy. Pack a snack and a drink to enjoy at the creekside turnaround. “We focus on safety,” says Mary Joy. “Since we’re the first of our kind in America, we’re in a fishbowl.” Tour riders are given a safety talk before the ride begins. Guides are situated in the front and the back of the line, crossings are flagged and boom gates are functional. “We answer to the Federal Rail Authority with monthly reports.” 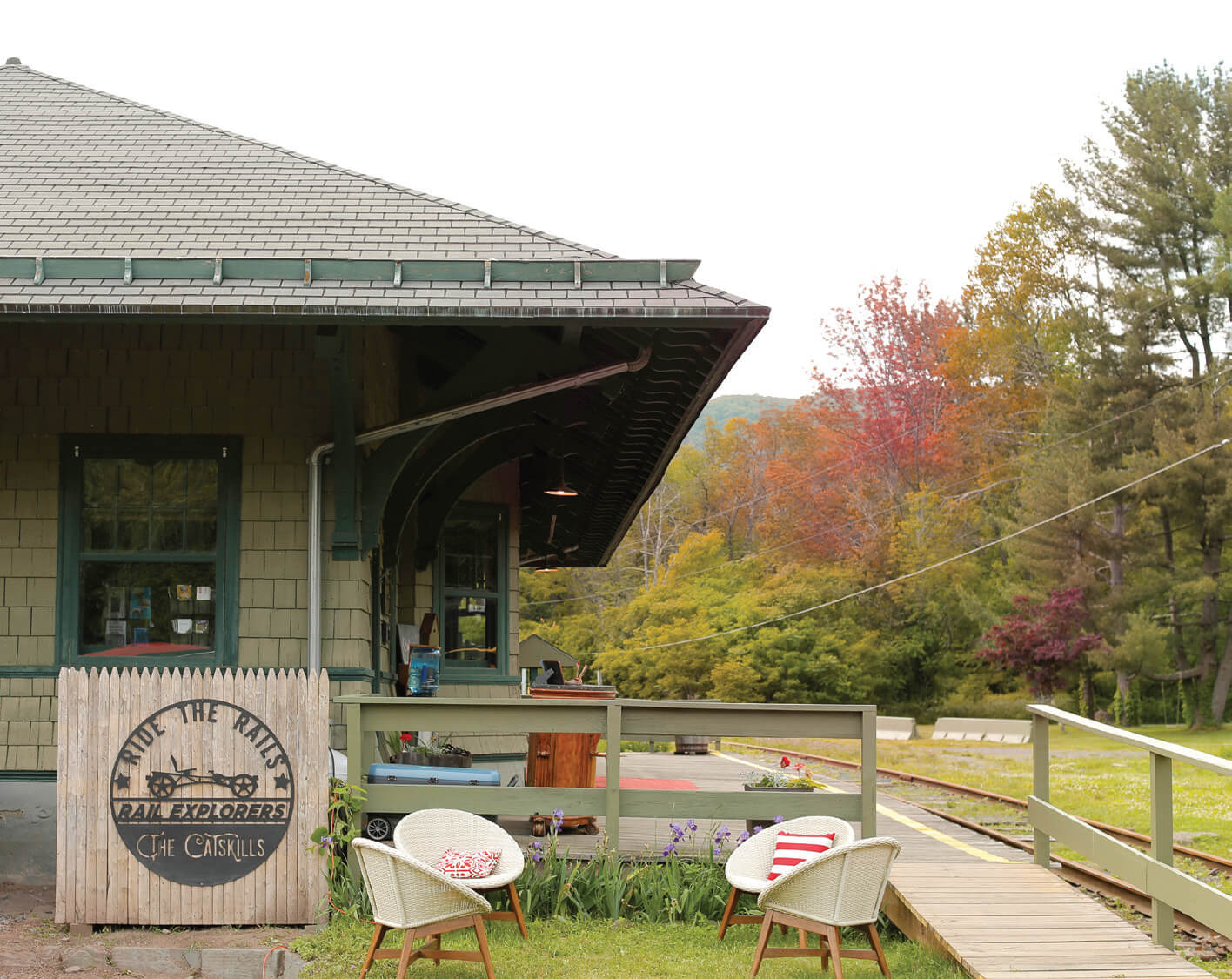 Rail Explorers support ecotourism, zero emissions, and create little to no impact on the environments and ecosystems the tours pass through.

Partnerships have been forged for special tours with the Phoenicia International Festival of the Voice and the Emerson Resort and Spa. Up and running in the Catskills since the summer, Rail Explorers has a lease with Ulster County for exclusive use of the tracks. Mary Joy says that they are always on the lookout to create new local partnerships.

The Catskill Division presently employs 16 local workers. “We’re trying to be a sustainable, committed employer to our employees,” says Mary Joy. Managers Michelle and J.R. Davis made the move to the Valley from the Las Vegas Division. As Hudson Valley weekenders for more than a decade, Mary Joy, Alex, and their family have since made a permanent move to call the Catskill Mountains their home. 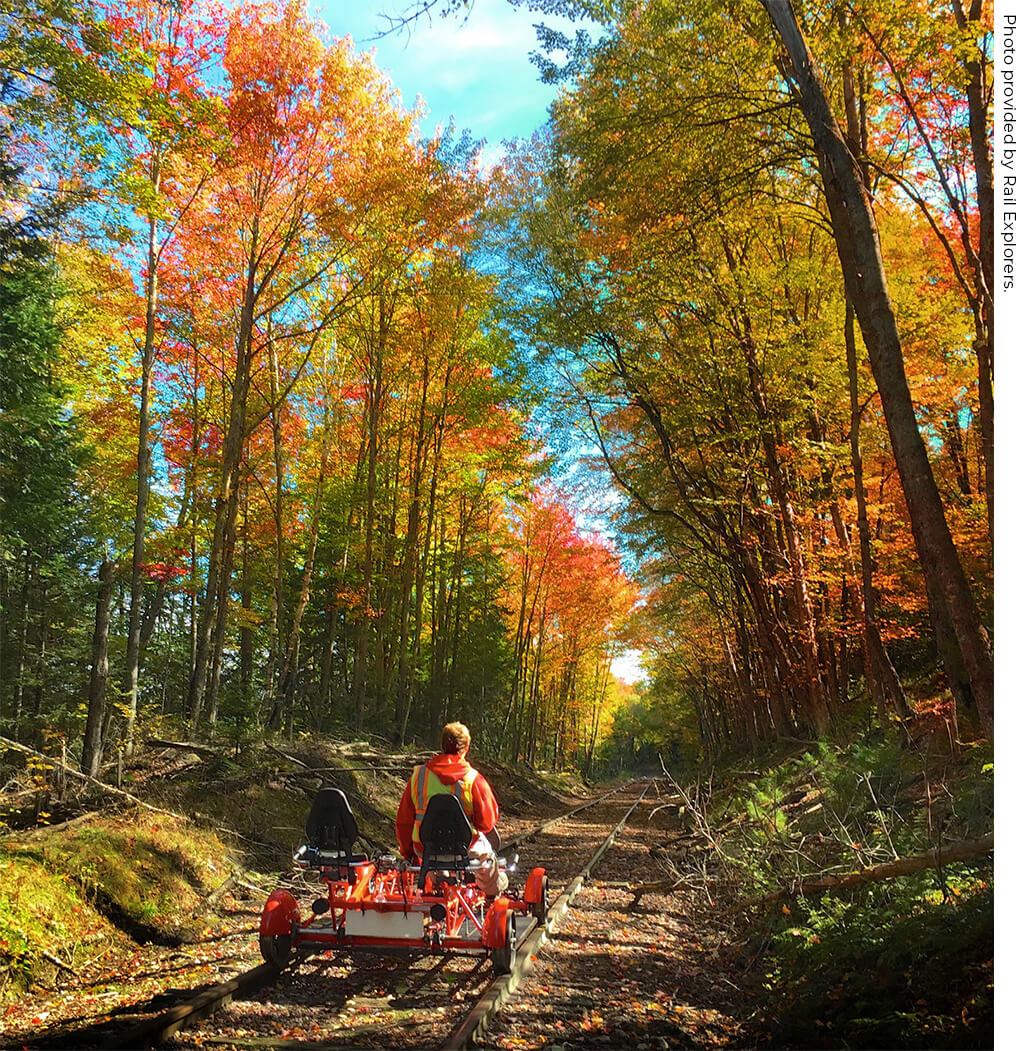 Rail Explorers is an entirely unique and interactive way to enjoy the mountains and the seasons in a way we never have before.

Rail Explorers found their first partnership with the Adirondack Scenic Railroad in 2015. The Rhode Island Division is still active seasonally along the Newport and Narragansett Railroad. The Las Vegas Division is open November through April. In 2016, the Delaware Division operated along the Wilmington and Western Railroad. There are hopes of starting up there again in 2019.

Rail Explorers is an entirely unique and interactive way to enjoy the mountains and the seasons in a way we never have before. “It’s a special new jewel in the crown of the Catskills,” says Mary Joy.

Don’t forget to book your tour in advance. Check in and park at the Empire State Railroad Museum in the village of Phoenicia. Stop in for a bit of history before you start your journey.